Taika Waititi takes on hate and Hitler with humor and pathos 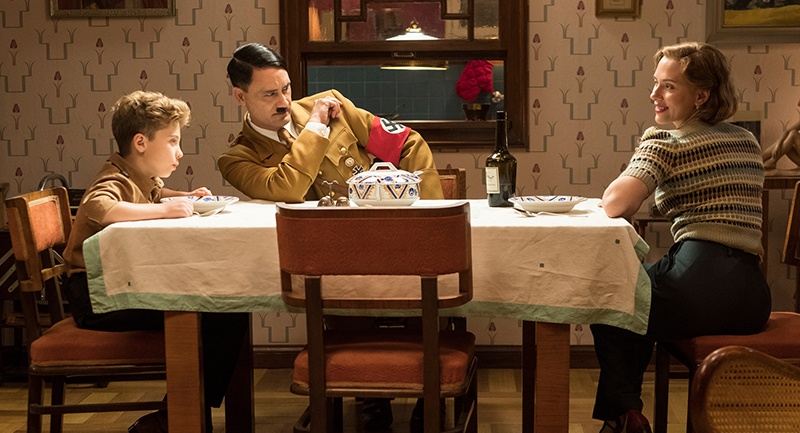 With the real world in literal flames and global politics riven by a reemergence of far right nationalism, for Taika Waititi to make a comedy about Hitler sounds like treacherous territory for the Thor: Ragnorok and What We Do in the Shadows director.

Set in Nazi Germany circa 1944 and featuring a slapstick Fuhrer (Waititi) as the imaginary friend of the titular 10-year-old (the excellent, cherubic Roman Griffin Davis), Jojo Rabbit nonetheless braves the no-man’s-land between genuinely laugh-out-loud comic moments and the horrors of hate and succeeds, for the most part, with only a few filmic flesh wounds. Absurdist humor abounds throughout a story whose underlying themes echo Elvis Costello’s eternal question, “What’s so funny about peace, love, and understanding?” even as corpses dangle from a foregrounded gallows.

Placing the movie’s POV squarely on the shoulders of little Hitler youth Johannes renders the terrible allure of blind, unswerving fear of The Other utterly explicable before dismantling the illogic of it all brick by brick. Meek but fervently pro-Nazi, Jojo — so nicknamed because he’s unable to kill a rabbit at a Nazi Youth drill camp — lives alone with his mother Rosie (Scarlett Johansson), a vibrant and vital force in a household lacking a father figure and missing a sister. Indoctrinated into the bizarro world of National Socialism’s anti-Jewish pathology (all Jews have horns, scales, and eat babies, etc), Jojo and his imaginary ideologue are naturally aghast to discover that mom’s hiding a young Jewish girl, Elsa, (Thomasin McKenzie) in the walls upstairs. But that discovery, and the tentative steps towards mutual semi-understanding, kindles the undoing of both Jojo’s corrupted kidhood worldview and his goofy, goonish imaginary Hitler, who rants and raves that his little protege isn’t living up to Aryan high standards since he can’t manage to keep Elsa from stealing the knives he plans to kill her with.

Buoyed by scene-stealing turn from Sam Rockwell as a deceptively buffoonish local Wehrmacht officer with a drinking habit, and Waititi’s own memorably wacky take on the most hated and hateful figure of the 20th century, this is an “anti-hate satire” that’s as serious in its arguments as it is often ludicrously hilarious in its depiction of true evil. It’s a coming of age story unlike any other, filled with the director’s trademark heart and a soul-stirring argument against the ever ready darkness of unswerving, “patriotic” nationalism. Like the old Spike Jones tune “Der Fuhrer’s Face,” it’s a fearless Bronx cheer that champions inclusiveness over exclusion and understanding over paranoia. Score yet another one for the Allies.