VFW, the new splatterpunk action flick from Joe Begos, which gets its world premiere at Fantastic Fest this weekend

He's one of many FF regulars back this year, having made a splash with his debut, alien infection shocker Almost Human, and its twisted psionic successor, The Mind's Eye. Now he's back with the world premiere of his latest feature: VFW, a mix of Assault on Precinct 13 and Street Trash, where drug-crazed gangs go face-to-gore-splattered-face with a cadre of old soldiers swinging for one last fight. That's just been acquired by RLJE Films. which is cause for celebration enough:; But while he's in town Begos will also be unspooling the most critically acclaimed film of his career: Bliss, a grungy, psychedelic tale of an artist, Dezzy (Dora Madison), whose creative passions develop a dark resonance after one especially debauched night.

The fest itself will be a rare breather for Begos, a chance to appreciate the unbelievable hard work of creating two insane works at the same time. He added, "And now I'm about to go out and tour two movies, which will be nice after the year and a half of nonstop work to make it happen."

Austin Chronicle: So you've got VFW and Bliss both screening at Fantastic Fest, but which came first? Because most filmmakers have a lot of ongoing projects that take forever to come together, and they're really off shooting commercials.

Joe Begos: I wish I had that luxury, but I'm still broke as fuck. Unfortunately there's no commercials in my world.

Bliss came first, and it was kind of weird. After Mind's Eye I was trying to get a movie made and it was really hard – it was harder than the first two. I'd known [producer Dallas Sonnier] for a while, and he was my manager at one point, and he was like, "Let's make a movie together." It just never really came together, and across the course of a year and a half or two years I just went, "Fuck this, I'm just going to go make a movie, start from scratch again. I'm going to make something really small, because I need to go make something." I'd been through a lot of shit in the last couple of years, so let me just put my brain onscreen and figure this out.

So I started doing Bliss to be the size of Almost Human, and during this time Dallas ended up sending me a script and he's like, "Hey, I just bought [horror magazine and studio Fangoria] and I'm going to do some Fango movies." He sent me a bunch of scripts, but there was one that I liked, and that was VFW.

Of course, I've been attached to movies before, and who knows what the fuck that means. So I kept on writing Bliss, and eventually I finished the script and I got a little bit of money for it. I called up Dallas and said, "Look, I just got money for a script I really want to do, and I know VFW isn't ready to go yet. So I'm going to go shoot this movie, and if at any point the money for VFW comes together, let me know and I'll put Bliss on the sidelines, I'll come shoot VFW and I'll come back to Bliss later."

So we went and shot Bliss last summer. I fucking raced through it. It was really low budget, we had a crew of nine, we shot on 16 mm, and we were just waiting. We cut as fast as possible, because we knew that we could get the call any time. Then Dallas said, "We're going to do Satanic Panic first," and they actually shot Satanic Panic, so I'm like, "Well, maybe they're for real. Maybe we're going to shoot VFW."

I got done with a locked edit on Bliss and Dallas is like, "The money came together for VFW, let's start putting a cast together." So as we were casting, I was putting the score and the mix together, and I flew to Dallas to start production on VFW while Bliss was still being finished. So I had a month and a half to prep VFW and finish Bliss. We had to leave set in the middle of (Tribeca Film Festival) to play Bliss: I told Tribeca, "We have one night off. You have to play it on Saturday night, otherwise I'll be busy shooting my movie."

So it's literally been stacked on top of each other, and I wouldn't have it any other way. I'm hoping, with two movies playing these festivals, it won't be so hard to get another going. 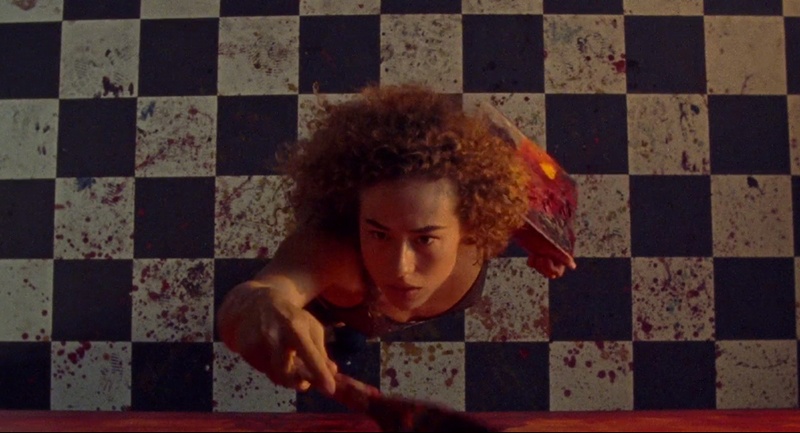 Bliss, the critically acclaimed psychotropic nightmare from Joe Begos, which gets its Texas premiere this Saturday at Fantastic Fest

AC: Bliss feels like you went back to Almost Human and its sense of the loss of self. It's a different tone to what people might have started to expect of you.

AC: In both films, you used a who's who of older actors, a lot of whom people don't know can do horror. Like George Wendt: He did an episode of Masters of Horror and King of the Ants, which is one of Stuart Gordon's most chilling films.

JB: And House. Yeah, King of the Ants is like a really dirty, low-budget little thriller. It's even got that Baldwin brother, Daniel, giving a monologue that's actually good acting. OK, It's obvious that Stuart Gordon is really good with actors.

When it came to casting, right from the get-go I went, we need to swing high. I don't want it to become, oh, it's just a bunch of tired horror faces. It's a B-class idea, but I want to approach this like it's an A-class picture. Stephen Lang was right at the top of my list, because he's just what you imagine a late-Sixties Vietnam vet to be, and he's just such a physical actor. I really didn't think that we'd get him, but he surprisingly actually really got the idea, and he was into the whole entire angle of the movie. Once he was on, we were able to get our entire cast orbiting him.

AC: These were also the first times you weren't your own director of photography, as you brought Mike Testin in for both films. Plus VFW was the first time you worked from someone else's script. How did that affect the productions for you?

JB: It was definitely fucking weird, but it was something that I always wanted to try, and see what it was right. Some of my favorite directors, they bounce between writing their own script and directing other people's material – Michael Mann, Brian De Palma, John Carpenter, they bounce back and forth. I just never had a script that spoke to my sensibilities in that way, and this one, it did.

It was definitely hard to familiarize myself with the material from the get-go, because when I'm writing scenes I'm thinking of the light and the staging and the blocking. So it was hard to come in from the top, but I was able to work on the script, get my fingers in there and make it work.

The first time I worked with [Testin], it was on Bliss and I had never actually shot something that was a large-scale piece of work on film, so I wanted to bring in someone who had experience of that, and would be OK with my sensibilities. On VFW and Bliss I operated every shot. ... That's something that I just can't not do, because it's an organic experience for me. Especially on VFW, being there on the floor with the camera, you've got these eight guys around you, I'm basically a character. You're trying to figure out the staging and where the camera's going to go. Trying to shoot nine pages in three hours because it's a stage play and we've got no time. So me being there as an operator really added to that, and made it feel like a Joe movie, it feels like a Joe movie.

Once I was on set, the producers knew my reputation of getting a lot of shit done in a very small amount of time. They left me alone and let me do my thing. VFW was shot in 20 days, and two of those days we lost completely due to rain. Bliss was 23 days, and VFW was 18. It was a fucking nightmare. The small movie shoots on film for 23 days, and then the bigger-budget movie shoots on digital for 18. That's the business we work in.