Merrily We Roll Along his most ambitious project yet 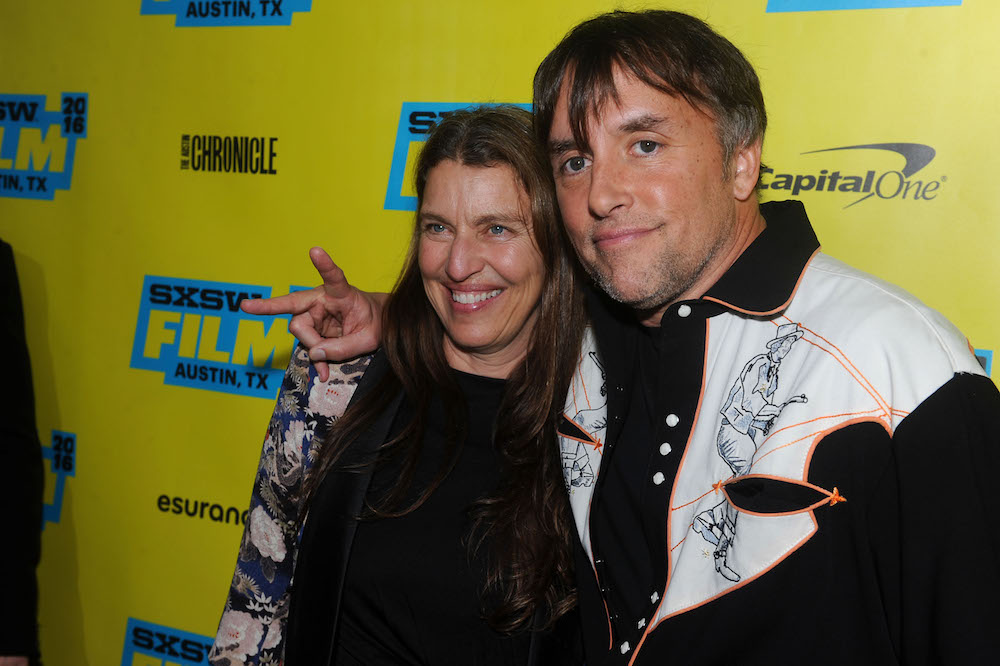 Producer Ginger Sledge and director Richard Linklater (shown here at the SXSW 2016 premiere of Everybody Wants Some!! are reuniting for possibly Linklater's most ambitious project yet: A big screen adaptation of Stephen Sondheim's Merrily We Roll Along, which he will film over the next 20 years. (Photo by John Anderson)

Richard Linklater is going to the theatre. Sort of. This morning, the filmmaker confirmed that he's currently shooting what could turn out to be his most ambitious project to date: an adaptation of Stephen Sondheim's Merrily We Roll Along. Yet this is no normal stage-to-screen conversion, but a 20-year odyssey.

Between the Before trilogy and Boyhood, Linklater has become synonymous with long-term storytelling, and so it is with this version of the 1981 Broadway oddity. The story of three college friends and their complicated relationship is told in reverse, starting with a party celebrating the success of Hollywood bigwig Franklin Shepard, then flowing backwards to his hardscrabble years with best friends Mary Flynn (a sardonic critic, based by George S. Kaufman on his fellow Algonquin Hotel “Vicious Circle” member Dorothy Parker), and Charley Kringas, the musical partner Shepard leaves behind. It's a bleak story of lost principles, which Sondheim and librettist George Fruth adapted from Kaufman and Moss Hart’s 1934 Broadway play of the same name.

However, rather than going the It route of finding older actors and younger lookalikes, or risk digital (de)aging, Linklater and his cast will reunite over the next two decades, and the actors will age with their characters, a la Boyhood (which, with its 12 year shoot, seems like a proof-of-concept now). This gives the director plenty of time to work on his other gestating projects, included his love letter to NASA and Houston during the space race, and his biopic of late, great comedian Bill Hicks.

In the stage version, the script catches up with the characters in 1976, 1973, 1968, 1966, 1964, 1962, 1961, 1960, and 1959, before its beginning/end in October, 1957, as Sputnik flies over the three leads in a New York apartment block roof. Linklater has already shot that first sequence (another trait of the director, shooting stealthily), with Blake Jenner (who worked with Linklater on Everybody Wants Some!!) as Shepard, Beanie Feldstein as Flynn, and Ben Platt, who has confirmed that he will play Kringas.

Film audiences may recognize the musical as the one that Feldstein and Saoirse Ronan put on in Lady Bird, while the Austin theatre crowd may remember a rare revival production at St. Edwards in 2014. However, in a statement, Linklater said that his connection to the piece dates back to his own pre-Hollywood days. He wrote, “I first saw, and fell in love with Merrily in the ‘80s and I can’t think of a better place to spend the next 20 years than in the world of a Sondheim musical. I don’t enter this multi-year experience lightly, but it seems the best, perhaps the only way, to do this story justice on film.”

The film is being produced by Linklater's long-time collaborator and Texas film institution Ginger Sledge (Parkland, Miss Congeniality), along with Jason Blum of Blumhouse Pictures and playwright Jonathan Marc Sherman.

Of course, leave it to Blumhouse to make a suitable comment for a play about lost innocence, tweeting this morning: "The most ambitious thing about this tremendous project we are undertaking with Richard Linklater is that we boldly assume there will be a planet in 20 years."