Trans joy, trans love, and trans lives are “as limitless as nature itself,” as the words under Transfinite read in this film’s title sequence.

This anthology, made up of seven standalone magical sci-fi short stories, directed by Neelu Bhuman and written by a collective of multicultural screenwriters in the San Francisco Bay Area, made its Southwest premiere on Saturday at the 32nd Annual aGLIFF (All Genders, Lifestyles, and Identities Film Festival).

In these chapters, imaginative, supernatural stories unfold, enhanced by vivid drawings that further the narrative. There’s "Najma," the trans music producer who turns into a snake to vanquish a bigot who insults her and her boyfriend. Next, a grandmother tells her boxer granddaughter a fable of a demon who, consumed by his big fist, cannot feel whole until an androgynous dancer comes along and sets a new balance.

In "Shayla," a developer falls in love with an environmentalist protesting outside his building. Next, a woman living in a totalitarian regime dreams she is under the ocean with her favorite poet whose words sustain her. There’s a superkid, Nova, who teaches her bully a lesson when he steals her crutch. In the finale, a black trans sex worker hypnotizes the President of the United States to force him to pass radical executive orders for racial, decolonial, and sexual liberation.

Nature and technology come together in these fantastical films, as the natural environment is often centered in futuristic settings. In "Maya," two caretakers of a lush greenhouse are overcome with desire for one another. As different plants are shown, holographic icons of geometric shapes pop up above them, apparently the colorful categorization system of the future. Nature is seen as divine, as transformative, and as essential; this short equates the growth of these plants with the blossoming of queer identities.

“Let these fruits grow,” says main character Mango Blu (D'Lo, who also wrote the segment), explaining that those who are open can taste the sweet flavor of the fruits, while they taste bitter to those who are closed off with bias.

Transfinite itself is an abundant result of letting queer fruits grow. If this rich film was a garden, it would be bursting with delightful overgrowth. 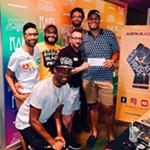 Austin Pride Donates $20,000 to Austin Black Pride
And more reasons to keep on singin’ and dancin’