Lulu Wang Introduces Us to The Farewell 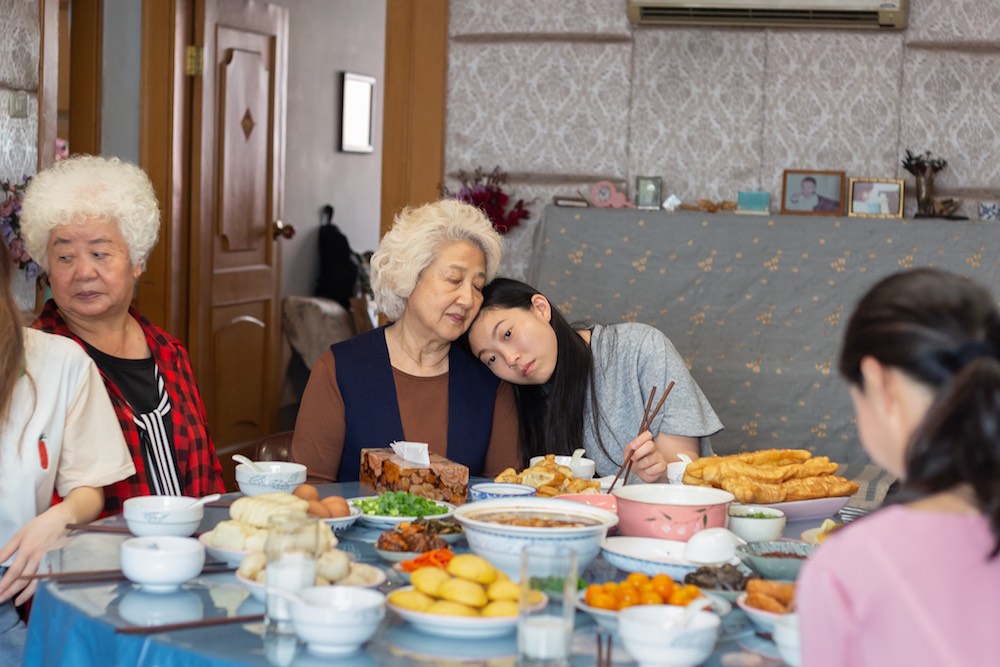 . I remember as a kid, when my parents would be with their Chinese-American friends, they would have these arguments about, "Well, are you Chinese now? Are you American?" Dinnertime conversations recalled in The Farewell, the new film from director Lulu Wang. (Image courtesy of A24)

American cinema has a habit of conflating a film where the bulk of the dialogue is not English with "foreign cinema." But when it comes to The Farewell, even though it was shot in China, with a Chinese and Chinese American cast, and much of the script is in Mandarin, writer/director Lulu Wang is clear about one thing: this is an American film.

That's not a boast or an aspiration. It's her statement on the nature of this quasi-autobiographical tale. Billi (Awkwafina) moved to the U.S. when she was six, and that's where she grew up. When her nai nai, her grandmother (Zhao Shuzhen), is diagnosed with cancer, the entire family puts on a fake wedding as an excuse to visit her. However, Billi is not invited – as her mother tells her, her inability to hide her emotions will tip off granny that something is wrong, and the family has decided that it's best not to tell her that she's dying.

The Farewell isn't the run-of-the-mill "American abroad" story. Instead, it's Wang's efforts to model the complexities of identity that go beyond ethnicity, and explore deeper questions of belonging, of cultural identity, of nationality, and of the difference between being, say, Chinese and being Chinese American. Wang said, "It's so much easier to make a fish out of water story when the person is blonde and blue-eyed in an Asian country. But how do you do that with somebody who looks like everyone else? That's the challenge in real life, when you're a foreigner in a place where everyone looks like you, and so they go, 'You're not a foreigner. You should belong. You should understand all these things,' and you don't."

The filmmaker described Billi as "our conduit to this world and this family. ... When I first pitched the film, people would say, 'Is this a Chinese film or an American film?' It was important to me that it was an American film, because when I talked to producers they would say, 'If you want to make this a Chinese film, the main character cannot be Billi, because her perspective is too western.' That's when I knew it is American film, even though people might say, 'Oh, it's going to be subtitled, and the entire cast is Asian, Asian American, why isn't it Asian?' It's because of that Chinese investor." 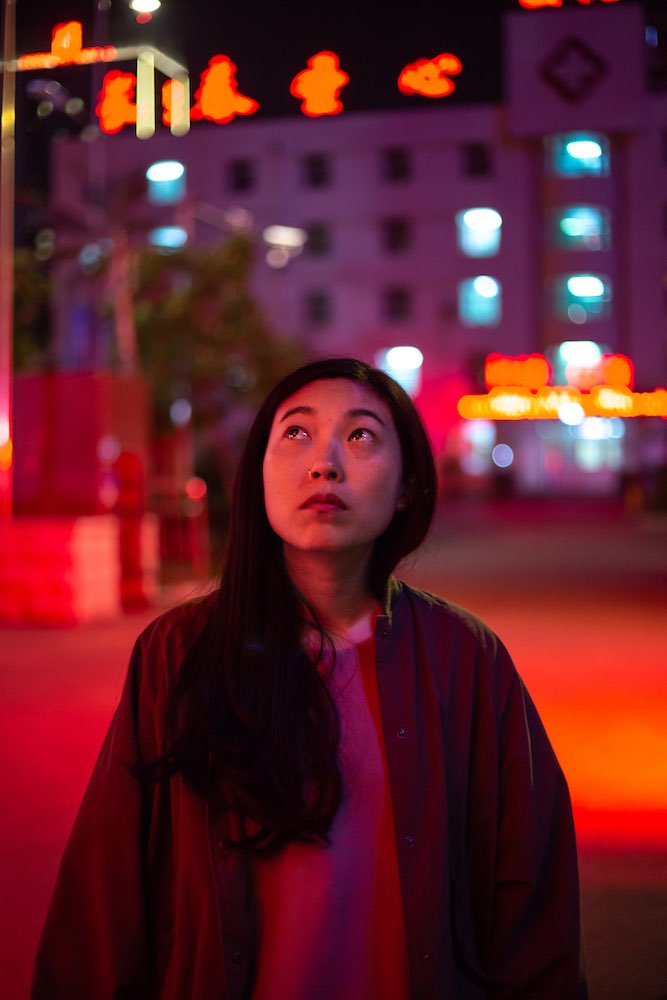 "It's so much easier to make a fish out of water story when the person is blonde and blue-eyed in an Asian country. But how do you do that with somebody who looks like everyone else?" Director Lulu Wang on Awkwafina as Billi in The Farewell. (Image courtesy of A24)
Austin Chronicle: As a British person living in the U.S., I've had people say that I'm not really foreign, which is not my experience as an actual foreigner. It's something that resonated for me in the film. There are so many questions of identity here – of how Billi sees herself, of how her parents see themselves, and her uncle's view of himself being Chinese in Japan, and the Chinese part of the family's view of them all. That's what gives it the texture and nuance, rather than just being a story about not telling granny she's dying.

Lulu Wang: For me, the exploration of identity of in The Farewell is not on the surface level, the way that Hollywood likes to see representation. When they talk about diversity, they go, "OK, we've just got to get a rainbow of faces," that you look different. But for me, identity is about guilt when you leave home. It's about regret, sometimes. It's about belonging. It's about the sense of home, and that doesn't only apply to people who are not white.

If someone might say, "Well, you're not really a foreigner," what they're really saying is that, "Well, you're white." What they don't recognize, what they don't see, is that you're probably more of a foreigner in some ways. I grew up in this country since I was six, and for me the film is just trying to get deeper, looking at Asians as a spectrum. There's no way one way to be Asian, there's no one way to be Asian American, there's no one way to be Chinese or Chinese American.

China is a massive country. It's much bigger than the U.S., but when we think about Asia we just think about Asians. But if you go to China, people in the North and the South, they don't get along. Their cultures are completely different, the food is completely different, different dialects, and so I wanted to make sure that I was able to capture the spectrum of this family, culturally, values-wise, and in terms of language. It was important to me to show that there are different degrees of language abilities, in Chinese and English, and yet they're one family. In spite of all of these gaps – cultural, language – they're able to overcome all of them and maintain the love for each other.

AC: There's also the aspect of families, where members will protect each other but can be mean to each other, and that's expressed in the family meal, where the Chinese part of the family picks at those that moved away. That feels very grounded in personal experience.

LW: Oh, countless times. That scene is a hodge-podge of every conversation ever had at the dinner table. I remember as a kid, when my parents would be with their Chinese-American friends, they would have these arguments about, "Well, are you Chinese now? Are you American?" They would ask us kids, "Well, if there's a war, who would you fight for?" I'm like seven years old, trying to eat my fucking McDonald's, and I'm like, "Who would I go to war for? I don't want to go to war for any fucking person or any country." But it becomes this thing, and Americans ask it, and immigrants themselves ask it. None of us have the answers. We're all of these things and we're none of these things.

AC: Your film is like Jay Chern's Omotenashi, where whether a character speaks a line in Mandarin, or English, or Japanese, is a very deliberate decision about how they want be perceived. The switches between Mandarin and English seem very purposeful.

LW: I wanted to make it so seamless, but they're unconscious about language. You get so used to switching between the two. Even on set, I'd be directing in both languages, and sometimes I'd be speaking in Chinese and I'd turn to Awkwafina and just keep speaking Chinese, and she'd be like, "Dude, it's me," and I'd be like, "Sorry, sorry, sorry."

Because, for me, so much of directing is about communicating, and I'm just trying to communicate. It's the same with these characters. People who speak multiple languages will say this, that sometimes they'll be looking for a word and they go, "It's that, that, that," and then they realize that, oh, the word that I was looking for is another language, and you're trying to explain this one vocabulary word that doesn't exist in English.

People often try to compare (The Farewell) to other Asian films, or other Asian American films, which I understand from a cultural perspective, but in terms of cinematic tools or craft, I wasn't necessarily setting out to reference Asian other films, because it's a very American perspective. Part of the American experience is to navigate all these different languages from your family. "Dad, I don't know that word," and he tells you.

AC: Swiss people have six languages to navigate, and many of them are at least a bit fluent in all or most of them, and they'll drop a word in and you go, "OK, that doesn't work in English."

LW: Exactly. My producer on my last film, Posthumous, was Swiss-German, so she didn't speak all the languages, but she spoke German, and Swiss-German, and a little bit of French. We lived in Berlin for a few years while we were developing and making that film, and it was so great, because it was not like being in America. It was so much more global, and there's people from all over the world, and people are trying to communicate with whatever tools they had.

AC: Billi has that balance between being part of the family, but at the same time she has spent most of her life growing up in a different culture. How did you work with Awkwafina on creating that tension?

LW: She spoke way less Chinese than I do. I'm fairly fluent, and I was fairly nervous when I heard that her Chinese was fairly limited. But I think it ultimately worked for the film. The fact that she was more limited in the language helped to support the idea that the character was the outcast. She studied abroad in China like I did, but other than that hasn't been there a whole lot, and so she very much is a foreigner in China.

When she was on set, she often felt very uncomfortable, very emotional, very sensitive, because she was going through this real experience and real journey of going back to her family's home country and feeling out of place there. In the past, she's always used humor as a way to deflect any tension. She told me that's a tool that she's had since she was a kid, that she could crack a joke and everyone would laugh and it would dissipate any tension in the room. It became her superpower. So here she would come on set and was told not to crack jokes – that she couldn't, as a character, dissipate the tension. She was very uncomfortable with that, so I had to push her to embrace everything that she was feeling, and channel it into Billi. That's one of the things you really feel in her performance, that she really channels this displacement and grief.

The Farewell opens in Austin this weekend. For review and listings, see our Showtimes page.