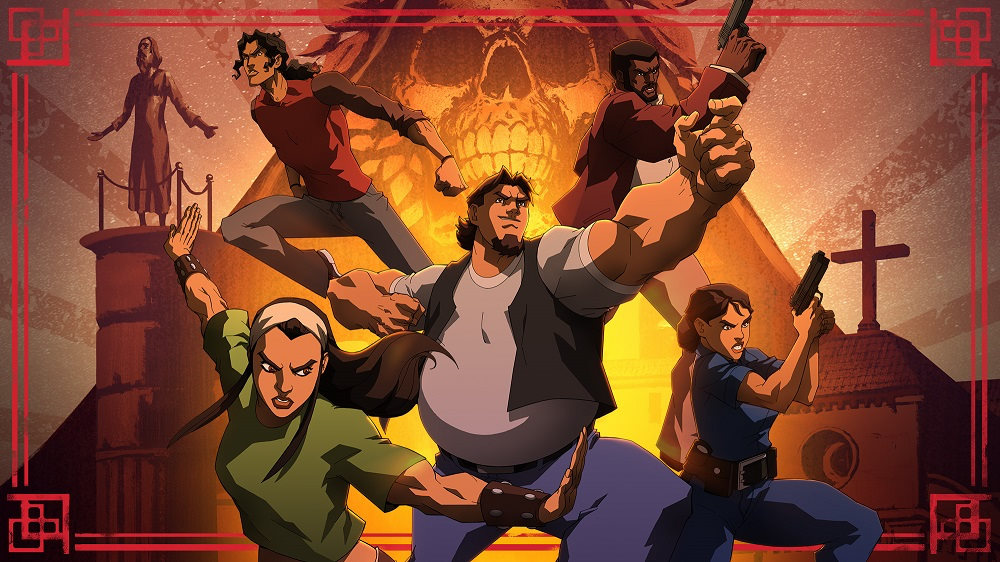 Austin-based Powerhouse Animation Studios has finally unleashed some sneak-look footage from its upcoming original show, Seis Manos. The martial arts action series, set in Mexico and drawing from a multitude of grindhouse traditions, doesn't debut on Netflix until later this year, but here's the first hard-hitting clip.

Set in the fictional Mexican town of San Simon, Seis Manos follows three orphans, raised in the forms and philosophies of the Chinese martial arts, who set out on a path of bloody revenge and justice after the death of their mentor. Meanwhile the San Simon police and the DEA are trying to take down a drug lord, and find themselves on the same trail as the Seis Manos.

Attendees at Powerhouse's panel at this weekend's RTX Animation Festival saw a different clip (less bloody, but still with lots of action) and got a little insight into the show's development. According to Head of Production Jason Williams, the project had been flying around Powerhouse for a few years: in fact, while the show was only officially confirmed May last year, in fact, the studio shared some early concept art with the Chronicle back in 2016. However, it was only with the success of Powerhouse's Castlevania adaptation for Netflix that Seis Manos' co-creators - writer Álvaro Rodríguez and company co-founder Brad Graeber - were able to get traction for the company's first original series.

Graeber is also the one who is responsible for the show's dedication to highlighting differing fighting styles, to reflect the different characters. Isabella (voiced by Aislinn Derbez) will specialize in the low stances and hard strikes of the Saholin hung ga style; Jesus (Jonny Cruz) will bring back the joys of drunken boxing, a la young Jackie Chan in Drunken Master; while Silencio practices the "white eyebrow" style attributed to legendary 18th century Shaolin monk Bak Mei (later fictionalized throughout martial arts cinema, and best known in the west as Pai Mei in Kill Bill). The series will also feature the voices of Mike Colter as DEA agent Brister, Angelica Vale as local cop Garcia, Vic Chao as mysterious ancient warrior Chiu, and Danny Trejo as violent drug lord El Balde.

The eight-episode first season of Seis Manos will debut later this year on Netflix. For more on the team behind the series, read our Powerhouse profile, "Making a Mark," Feb. 19, 2016.