Slamming With Damien Abraham For Viceland's The Wrestlers

The hardcore singer grabs hold of the global pro-wrestling explosion Viceland's The Wrestlers smashes conceptions about professional wrestling, as host Damien Abraham travels the world to spotlight one of the most under-appreciated and maligned performance arts (Image courtesy of Viceland)

Damian Abraham knows how to spend a birthday: In the Democratic Republic of Congo, watching a witch cut a man's junk off in a wrestling ring. "I remember sitting in the crowd, missing my home, missing my family, and just watching what unfolds in the ring, and thinking, 'You know what? I think my family will understand."

This wasn't some trip gone wild. It was all part of Abraham's new series for Viceland, The Wrestlers. A counterpart of sorts to their The Dark Side of the Ring, which tackles the scandalous side of professional wrestling (read our interview with director Evan Husney here), Abraham's globe-trotting series looks at the art form (and it is an art form) in all its spectacular variations. From the blazing hot wave of indie wrestling sweeping the U.S. to the Japan's joshi women's revolution, from bloody death matches to Mexico's gender-defying exoticos and, yes, Congolese voodoo catch wrestling. But this isn't some freakshow expose. Abrahams is a huge, lifelong fan of wrestling with a profound love of its extremities and varieties.

The series arrives at a remarkable time for pro-wrestling. Even as interest in the dominating power of the WWE seems to fade, indie promotions around the world are regularly selling out bigger and bigger venues; the new super-indies like Chicago's AAW and L.A.'s PWG have loyal, global followings; foreign promotions like New Japan and Mexico's AAA are finally breaking into the American market; and wrestlers are making themselves into stars through internet self-promotion, rather than depending on the deep pockets and social media teams of promoters. To top that all, there's finally seemingly true competition for the WWE for the first time in decades with the insurgent All-Elite Wrestling, a new televised promotion spearheaded by indie darlings the Young Bucks, NJPW megastar Kenny Omega, and second generation legacy performer Cody Rhodes.

In fact, the scene's so white-hot at the moment that Abrahams said he doubted he could have made his show – got the kind of access, caught the stars just as they were rising – if he was making it now. Instead, The Wrestlers is a document of the first swell of this new wave. Take DDT Pro, the company explored in next week's episode "The Craziest Promotion in Japan." Abraham said, "That locker room that DDT had was a once-in-a-lifetime assemblage of talent." Similarly, Evolve (as featured in opening episode "The Best New Talent in America") "is now the AA league for the WWE, and there's no way we would get access to their locker room the way we did now. DDT signed a deal with a huge streaming company shortly after we filmed, so I don't think they would have given us access now. So I think it was perfect timing."

Even though he's a fan, rather than a locker room insider, Abraham brings a shared experience to the show. As the vocalist for Canadian hardcore band Fucked up ("My day job," he said), he's lived a very similar lifestyle to that of the indie workers: Traveling between shows, performing for 20 minutes or half an hour. hanging out, crossing paths with the same friends and faces. "Independent wrestling is a scene," he said. "It's a community, and you see these people in the same way that bands see each other when they tour, and I see so many similarities between the two worlds."

It's also an opportunity to knock out a few misconceptions about wrestling, like the idea that it's inherently regressive. Abraham noted the recent furore after veteran manager Jim Cornette used homophobic language about gender-neutral wrestler Sonny Kiss – and the indie scene publicly and loudly unified around Kiss. "That's family," Abraham said. "To these people in the locker room, that's family, and you're attacking a family member. Wrestling has always had this fraternal locker room feel, but it's awesome to see how this is being brought to light in a positive way." 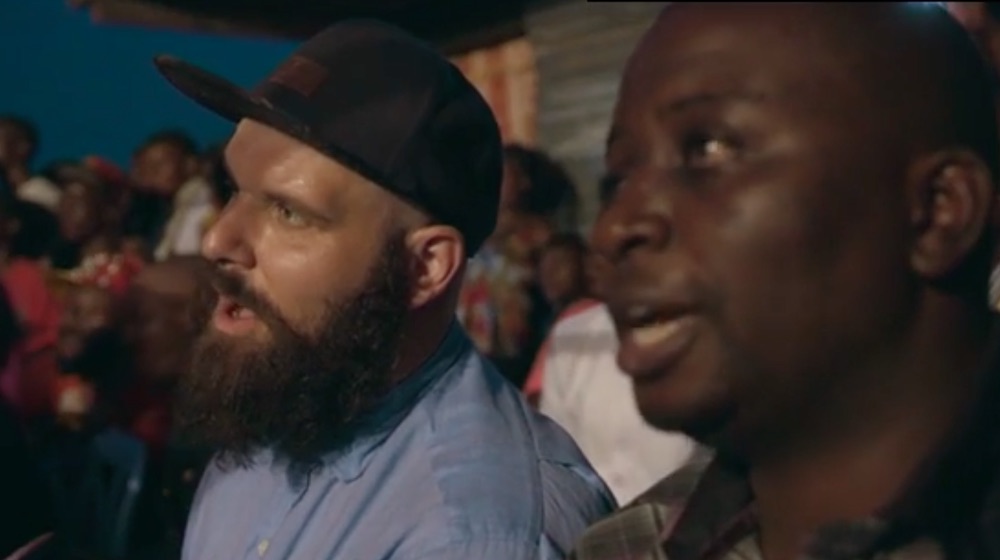 Damien Abraham ringside for voodoo wrestling in the DRC

Austin Chronicle: When did you decide to do this series?

Damian Abraham: I've been trying to do this show for years. I've watched wrestling my whole life. I've grew up in the Rock'n'Wrestling era, so I was exposed to it as part of pop culture, and watched it all through the Attitude Era, but it wasn't until I started working in this video store around the time I was 19, and one of the guys I worked with was an incredible tape collector. He had all this incredible wrestling from all over the world, and all this independent wrestling. I'd only really been exposed to the stuff that was on TV, which was WWF at the time – WWE now – and a little WCW toward the end, and the most minute taste of ECW. It wasn't until I started working with this guy that I got to see ECW and Japanese wrestling and Mexican wrestling and all these different styles that just looked so different to the stuff that I had seen on TV. I asked, "why isn't this the stuff that people watch?"

This was the stuff that I wanted to get into, so started buying (Frontier Martial Arts Wrestling) DVDs, buying tapes, becoming more of a nerdier fan, for lack of a better term a more world-view fan. And while playing in a band, listening to wrestling podcasts, watching wrestling, just becoming immersed in the idea that this is a global art form, and this is something that should be spread around the world.

By the time Vice came to me about five years ago and went, "We should start doing some documentaries," I was like, "Yeah. Let's just do ones on pro-wrestling. Let's do one on the CZW Tournament of Death," and they were like, "Well, we kind of want to do more cannabis documentaries."

So I did six cannabis documentaries for them over the next four years, and then eventually they went, "Yeah, you can do the Tournament of Death documentary." So I went down there, made the documentary down there with my friend Shawney Cohen, who's an amazing filmmaker, and it went down really well. A lot of people were really excited, and Vice came back and said, "What would your wrestling TV show look like that you always talked about?" and like I said, it was about showing the world how beautiful and rich this art form is, and how diverse this art form is, and just because you don't like the wrestling you've seen on TV, doesn't mean you have tasted all the different types of flavors of pro-wrestling that's our there.

AC: I think it's funny that Vice was easier to convince to let you do a show about weed, which is illegal, than about pro-wrestling.

But it felt like there were all these weird situations that were unfolding for us while we were filming. There was just this weird energy. I always liken the period that we're in now, which I think started around the time we we started filming, to 1991 – the year punk broke, as they say, but the year Nirvana exploded and you had the alternative music revolution and the music industry was seemingly turned on its head. And I think you're seeing that with wrestling, where independent wrestlers have as much power in the minds of fans as superstars backed by billion dollar corporations.

AC: You look at someone like the Young Bucks, who took their wrestling skill and then started shooting [web series] Being the Eliite, and now they've got a TV deal, their promotion is selling out arenas in minutes, their t-shirts are in Hot Topic, and they're breaking records for PPV sales. They did it utterly DIY.

DA: It's even more insane. They were actually dismissed by wrestling. Do you remember that whole thing about them not shaking (former WCW and WWE champion) Booker T's hand, and how disrespectful they were, and how it was over for them in wrestling? Now look at them. They're the pillar of a new era.

The Wrestlers is streaming now on www.viceland.com. New episodes every Wednesday.