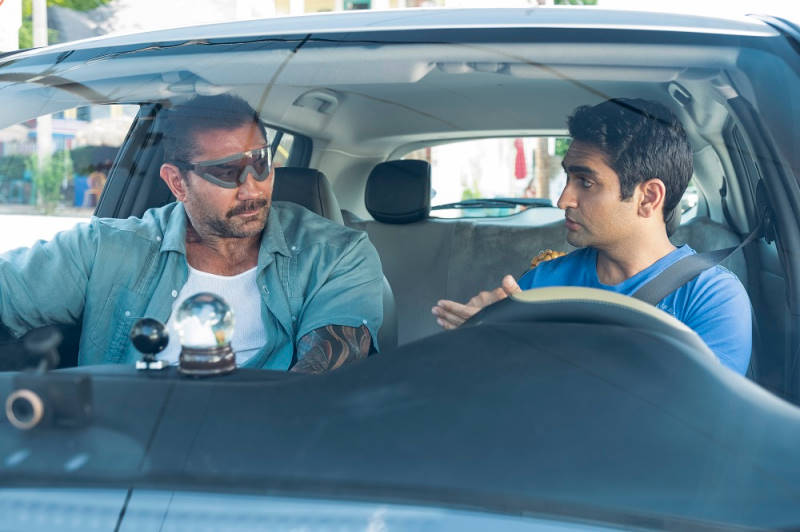 RTX picks up one of the summer's most eagerly anticipated comedies with a special preview screening of Stuber, headlining today's new comedy lineup

R-rated comedy Stuber was one of the smash hit headliners at SXSW this year: now that R stands for Rooster Teeth, as the local online content leviathan has added a special preview screening of the late Summer release to the lineup for RTX Austin, their annual fan gathering.

A riff on classic Eighties buddy crime comedies, Stuber stars Dave Bautista as Vic, a cop out to take down the crime boss (played by martial arts maniac Iko Uwais) who murdered his partner. Unfortunately, the day that he gets the big break in the case is the same day he has eye surgery, so he's forced to depend on hapless rideshare driver Stu (Kumail Nanjiani) to get around town and into increasingly dangerous and hilarious situations. Will Stu and his five star rating survive the night? RTX badge holders will find out during a special preview screening on Saturday, July 6, 8:30pm at the Paramount - a week ahead of the official release.

However, that's just the beginning of the extra comedy programming just added:

• CollegeHumor will be bringing one of its headline shows from its Dropout subscription service to Austin with a live version of tabletop fantasy gaming yuckfest Dimension 20. DM Brennan Lee Mulligan and Dimension 20 regulars Emily Axford, Brian Murphy, Ally Beardsley, Zac Oyama, and Siobhan Thompson will be joined by special guest player Griffin McElroy (co-founder of gaming news site Polgon, co-host of comedy podcast My Brother, My Brother and Me and the voice of Jasper in Rooster Teeth's animated series Camp Camp) for this special sidequest. Concept poster for Rooster Teeth's next gaming release, Vicious Circle
Speaking of gaming, yesterday RTX announced that there will be a Mortal Kombat 11 Grand Final tournament on July 6, with live coverage on the ELEAGUE Twitch channel. Registration is open now at www.battlefly.com.

Gamers will also get a first look at Vicious Circle, the next title from Rooster Teeth Games. After the success of anime crossover smash RWBY tie-ins Grimm Eclipse and the RWBY deckbuilding game, and the unexpected cult status of retro-cartoon horror Bendy and the Ink Machine, Vicious Circle is a retro-futuristic acton title, with bizarro mercenaries out for anything they can get.

This all comes on top of previously announced programming, the return of their Animation Festival, plus a host of live Rooster Teeth podcast recordings (including Always Open and the eponymous Rooster Teeth Podcast) and special panels for their biggest shows, including the company-defining Red vs Blue, RWBY, and the studio's latest smash, gen:LOCK starring Michael B. Jordan.