Doc on the musician/activist screens free at Cine Las Americas

Protest songs are as old as political protest – maybe even older, because they were the way for the people to call out their anger and highlight their plight. So while Ramon “Chunky” Sanchez was part of the birth of Chicano identity, his tools and his art were universal. 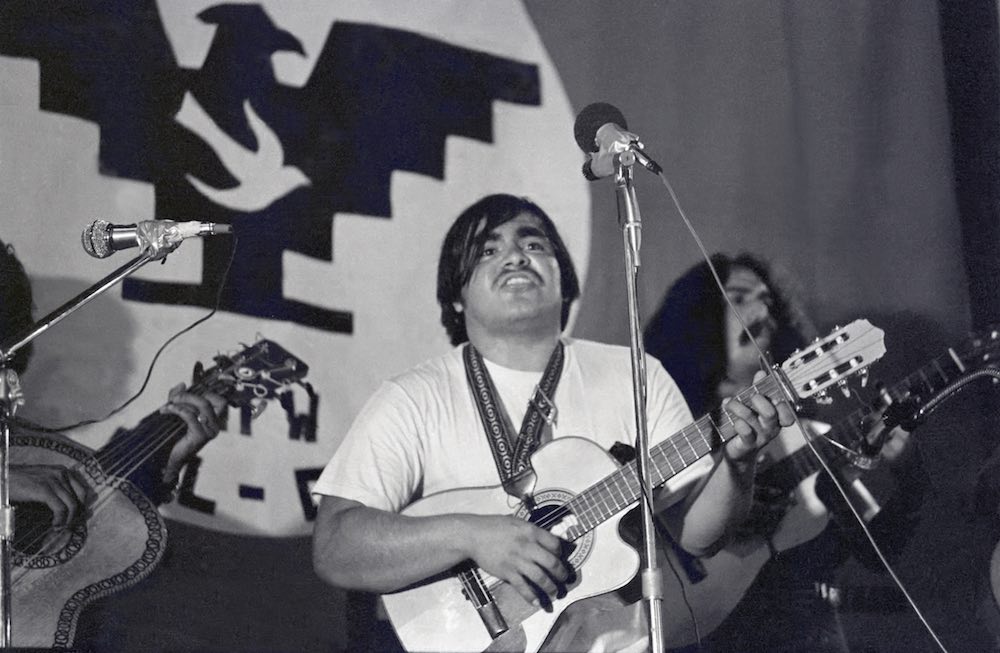 Filmmaker Paul Espinosa knew Chunky personally, and also as the voice of workers' protests, strumming alongside Cesar Chavez during the strikes of the 1970s. He was a barrio kid whose love of Mexican folk music and lyrical activism saw him honored before his death in 2016 with a National Endowment for the Arts’ National Heritage Fellowship – arguably the nation's highest plaudit for an artist.

The award-winning director of documentaries including The Hunt for Pancho Villa, now Espinosa's tribute to his friend, Singing Our Way To Freedom, plays this Sunday as part of the free programming at the Cine Las Americas International Film Festival.

Austin Chronicle: When did you first get to know Chunky as a performer and then as a friend?

Paul Espinosa: I met Chunky almost 40 years ago. I've been in San Diego since the late Seventies and he was here a little but earlier than that. I've done a lot of films for public television, covering Latino issues and U.S.-Mexico border issues, and I would come across Chunky quite regularly at demonstrations and rallies. So I became aware of him, probably really in the early Eighties or even late Seventies.

He actually did scored some music for some of my films in the Eighties, but I wanted to do more with him. I knew he was a good, charismatic performer on stage, and had a whole repertoire of songs that I thought were an important reflection of the civil right movement, but I wasn't exactly sure what I could do. But as the years went one, one of the things I thought was important to do was to sit down and do a very extended interview with him, because I was always a little bit concerned about his health. So I did that around 2004, a very long interview that is the spine of the film.

Then, as with many of these documentary projects, I struggled to find the money to make the film. It was a long haul, and I did several Kickstarter projects. You probably saw the list of supporters at the beginning of the film – I thought it was important to thank these several hundred individuals who gave, so that I was finally able to finish it last year.

AC: What made you realize that, out of all the projects you can and have worked on, this was one that you wanted to commit the time and energy to, to make it a full feature?

PE: One of the things I saw in Chunky was a story that was his story and a larger story. I felt that that there was a way of talking about the Chicano civil rights movement in particular that isn't well known. There's been some coverage of that, but I think today there are a lot of people who are not even aware that Chicanos or Latinos were involved in the civil rights movement.

I also felt that a really under-covered issue was the music of the period, and the role that music played in getting people inspired, and keeping people inspired. I think that we're somewhat aware of the role of music in the civil rights movement in general, but certainly in terms of the Chicano civil rights movement, I don't think there was hardly any attention to that.

Another part of the story is basically San Diego, and the place of San Diego in the civil rights movement. Obviously we give a little bit of larger context to what was happening all over the country at the time, but I think that a lot of audiences, even in San Diego, are not aware of the role it played in this larger movement.

AC: There's a new discussion going on about Chicano identity, in the wake of [student organization] MeCHA voting to change its name because of what it saw as negative connotations to the term Chicano. But Chunky talks about is as having a particular resonance, a liminal identity of not necessarily being seen as "Latino enough." So that makes the film even more pertinent.

PE: One of the things Chunky does is that he helps to define Chicano identity. We use that term very specifically – we have a bit at the very beginning and the very end that Chicano is a state of mind, a state of heart, and throughout we see an effort to define Chicano and Chicana identity. My hope is that the film will raise discussion around these issues. One of the thing's that clear to me is that a lot of people are just not very familiar with the whole battle that took place to create a specific identity. This idea of being caught, of being neither here nor there, that's something that was very central to this fight for identity.

I've bee now screening the film at different places, different festivals, and we've also screened it at community screenings, and there's a lot of young people – high school students, college students – who have some really interesting discussions around the issues the film raises. I can see that the film touches them, in terms of this question of identity. And interestingly enough, not just the whole Mexican-American experience. There are a lot of people who feel this dual identity, or this feeling of pressure to be something from their parents' culture that is different to what they are, or something from American culture that is the feeling of not knowing where to place themselves. I think that's something Chunky captured.

Singing Our Way to Freedom screens as part of the Cine Las Americas International Film Festival, Sunday, May 5, ESB-MACC Auditorium, as part of the festival's free programming.