On the Sidelines With New Documentary Fathers of Football

Bradley Beesley throws out the playbook for his high school doc

In technical terms, Bradley Beesley could be called an ethnographic documentarian - filmmakers who embed themselves in a community to examine them. At the same time, he's a guy who loves high school football. Now he's combined those two seemingly divergent interests in Fathers of Football. 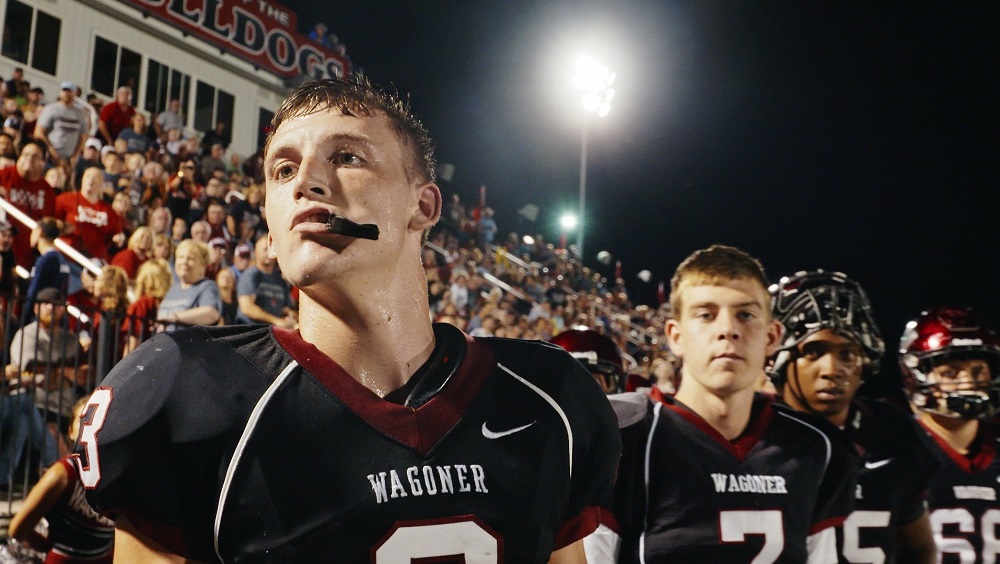 The heart of many small towns, the high school football team comes under the lens of Austin-based documentarian Bradley Beesley in his new film Fathers of Football

This weekend, after debuting last year at the Austin Film Festival, Beesley's latest documentary returns to Austin for an exclusive week long run at the Violet Crown Cinema. It's a huge homecoming, but he's got a few other things on his mind right now: Last week, he and his family brought his new baby son home. "Future football player, potentially."

Football's in the Beesley bloodline: his father used to coach high school, and Bradley was always by his side, so it's no wonder he's thinking about those traditions. But it's not just a family connection. There's something special to him about high school football, especially in towns where the Friday night lights are a beacon for the community. "I just like being on the sidelines, and smelling the popcorn, and seeing the cheerleaders. It's way more tactile and visceral than being as a college game, where you're so far away from the action that it doesn't feel like you're a part of a community at all."

Even though Beesley is a bulwark of Austin's filmmaking community, he's thematically and subject-wise still synonymous with his old home state of Oklahoma, and especially the small towns. Through his close creative connections with the Flaming Lips, and Sooner State-set documentaries like Okie Noodling and Sweethearts of the Prison Rodeo, he's become a chonicler of where he came from, and this film is no different. In fact, it's even more immediate to him. "This was one of those stories that I had stewed with for over 25 years," he said. "I started off shooting some of my dad's teams in the early Nineties, so I started off thinking that I was going to make a personal essay film about my father, because I had all this footage of him coaching on the sidelines."

But that's not what he eventually made, nor was it "like my earlier films, where I became super-tight with the people I was filming," he said. Instead, Fathers of Football is an outsider's view of a world he knows well: Oklahoma high school football, but through the emotional remove of the Wagoner Bulldogs, the pride of the small town of Wagoner (pop. 8,713), about 20 miles west of Tulsa.

Beesley's got a long history of letting projects gestate, until they're just right. Sweethearts took about a decade, and he admitted that he'd been talking about his football documentary for even longer than that. However, fate forced his hand in the Fall of 2015, when he landed a teaching fellowship at the University of Oklahoma: as part of the position, he had to provide his grad students with a practical, filmmaking project. Since he was going to be up there for a full semester, the timing seemed perfect to make another of his immersive documentaries.

Only this time, his subjects had something to say - or rather, not say - about that. Beesley's documentaries are based around getting to know them, and then letting the people and events speak for themselves. He thought he could do the same here: He said, "I wanted this to be like Frederick Wiseman's High School, just strictly observational."

But after two weeks of filming, he semi-joked, "We realized that these kids were really boring. ... They don't emote, teenagers these days. They're all on their phones, and they're not talking to one another." At the same time, Wagoner was on an unprecedented winning streak, stripping away one of the main tensions of any sports doc, that narrative of the underdog athlete. "I actually wanted them to lose, so I could get some emotion out of these kids, but they never lost."

That was a big difference from his own experiences as a player. "Every time we lost, I cried a lot - and we lost a lot. We only won five out of 30 games in three years of playing high school football."

So Beesley started to take a different tack. "I started to shoot interviews, and tell these people they had to turn up at a certain time, and with a haircut. You know, scheduling things for them, because following them wasn't going to work."

Luckily, real characters and personalities started to emerge. The player with the injury at the wrong time, taking him out of contention for the vital end-of-season match and the college possibilities it tantalizingly holds. The kid who only turns up to school to play football, but doesn't realize that his attitude is going to get him kicked off the squad.

Yet the real emotional heart of the film has stayed the same - in a way. Fathers of Football began with that footage of his dad, but it's a different father-son pair that became the heart of the film - Bulldogs coach Dale Condict and his son, Austin, whose season is cut short by a cancer diagnosis. Yet while his son is enduring treatment, Coach Dale still has a job to do, and a team and a community that relies on him. "Coach Condict said that at one point," said Beesley. "The town goes how the team goes."

Fathers of Football is screening at Violet Crown Cinema. Review and listings at our showtimes page. Director Bradley Beesley will be in attendance for the 6:20pm screening Friday and Saturday, April 26-27.