In Reality, Filmmaker Ann Lupo Knows Who She Is 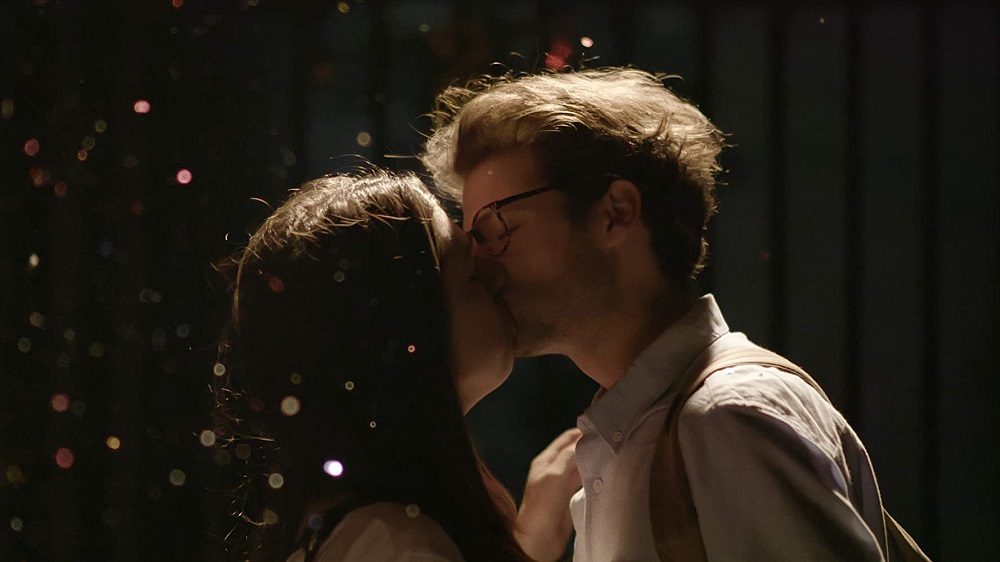 So much for happy endings: Ann Lupo (left) examines her quest for love in magical autobiography In Reality.

There's a lot of heart and humor and emotional honesty in In Reality, but there's also ... a variety show? "I knew I wanted it to finish with a musical number," said writer/director and star Ann Lupo.

In Reality is an autobiographical fantasy, with Lupo playing a highly non-fictionalized version of herself. Well, mostly: a dating-game show host version of herself turns up occasionally to berate her about why she's still single. However, amid the jokes and meta-moments, there's some serious self-reflection here.

Ann's story is Lupo's story: she was in a relationship, and it turned out she was more serious about it than he was. Her heart was broken, and she decides to use this film to put herself back through everything that went right and wrong - putting herself, quite literally, in front of the camera. Balancing somewhere between the emotional honesty of a Greta Gerwig performance and the knowing self-analysis of L.A. Story-era Steve Martin, Lupo tries to answer the eternal question: what's wrong with me? The answer, she finds out, is both nothing, and the same thing that's wrong with everyone.

Last fall, In Reality was an underdog success on the festival circuit, including taking the Austin Film Festival 2018 Comedy Vanguard Feature Audience Award: now it's back for a special AFF Audience Award Series screening, with Lupo back in Austin for a Q&A. It's another stop on the road trip for the film, as she is part of the wave of indie filmmakers who know there is an audience for their work, but that going through the conventional distribution systems isn't going to work for them. Now she self-distributing In Reality, going from city to city, connecting with crowds. "LA first, then we went to New York, Ashland, Oregon, then I had one day back in L.A. just to repack my bag, then we had a screening in Phoenix, now here. .... It's been really helpful to pound the pavement and get it out to all the places that really love independent film, and develop a base of people that really support the movie and are super-excited about it, and can really act as ambassadors for it."

Self-distribution, she said, "is the reality of independent film," and one she quickly adapted to after getting over the "fantasy of where this movie would go, and how it would be picked up by a distributor and launched in that that way."

It also makes perfect sense for a film that is offbeat and incredibly personal that she would stick around through the whole process. Yet that wasn't the original plan. In Reality started off as a micro-budget short, then became a six-part, one-hour web series. That's what she completed, and what had attracted the attention of Super Deluxe, Turner Broadcasting's comedy incubator. She was on the verge of signing a distribution deal with them, and then Turner shuttered the whole platform. "We literally received the Deadline article about it, rather than hearing from anyone," said Lupo.

But she doesn't look at the experience as a negative. Even with the deal on the table, she'd already been leaning towards self-distribution, and this was the final push. Throughout production and the path to self-distribution, she's had a series of mentors and guides who she credits with helping her - Liviya Kramer of Pretty Matches Productions, who was there at the first stages of the project; Berne and 368 founder Casey Neistat, who re-affirmed her conviction that she didn't have to take a deal just because it was there; Super Deluxe SVP Winnie Kemp, who saw that the show should be a film and helped organize the finance for re-shoots; and the team and alums of the Sundance Creative Distribution Initiative, who gave advice on how to keep control of her project - and helped remind her that she knew her film better than anyone, and had the skills. Austin Chronicle: Every film is personal, but there's no remove. There's no lead character called Ann, it's just you.

Ann Lupo: That was a conscious intention. This did not start as a feature film. It was a short film that I was going to make in my bedroom. I always say, I was listening to a lot of This American Life, and listening to how ordinary stories are told, but they're somehow interesting and relatable to anyone, if you tell it as specifically as you can.

“The art and the artists that I identify with most, you can undeniably tell had gone through an experience exactly like what they’re showing. There’s no reason to put a mask over it.”
So I went, first of all, my heart is broken and I don't know why, and I need to figure this out. This is not the first time this has happened, and I need to figure out why I end up in this position all the time. There's something with me, not with this guy, so it's about something in myself that I wanted to explore. So it started as this little project, but fate intervened, because my co-directors and co-writers, Esteban Pedraza and Aaron Pryka, who were classmates of mine at NYU, we just got back in touch randomly around that time, and they offered to help me work on it.

That was really important, because I had the intention that I did not went to Hannah Horvath myself. That was the world that this started in. Girls was still on the air, I had interned at HBO when the first pilot of Girls had arrived. Girls was everywhere, and that was defining female filmmaking and female-driven narratives, and I didn't want to do that. First, because I am my own person, but then I also felt like the art and the artists that I identify with most, you can undeniably tell had gone through an experience exactly like what they're showing. There's no reason to put a mask over it.

That's why it was really important to have Esteban and Aaron be my co-directors, because I knew that I wouldn't be able to get in there enough, and not just have it be a big ol' "Here's my problems." I want to get in to what was really happening with what I couldn't see.

AC: It feels throughout that there was something essential about having them present, especially people who know you so intimately, and can help you get there, but pull you back from any self-indulgence.

AL: Absolutely. We were a tripod, and we would fight, and it would be a struggle to have us all land on the same page about which was the best way to tell this part of the story, or who had the best idea or way to translate what I wanted to express, and make sure it was intimate and relatable to not just a female audience, but also a male audience. They were so patient. ... They would interview me, I would do a radio edit, decide which parts I think needed to be part of the story, and then wrote the narrative of when it needed to go into a fantasy, or when it needed to recreate a scene.

Then I would take it into kind of a writers room, and we would spitball ideas around. I would come in with this idea, but then they'd be like, "Hey, what if we tried it like this?" and I'd go, "Wow, that's so much better." It was so natural and fun, and we were all just so in it.