An entrancing collection of music from the rivers of northeast Brazil

Although director Bruno Murtinho repeatedly thanked the at-capacity Alamo audience for attending the North American premiere of his film, it hardly seemed necessary. Viewers had been audibly entranced by his portrayal of the musical landscape of the Amazon basin, pondering the question: “How many songs fit in this river?” 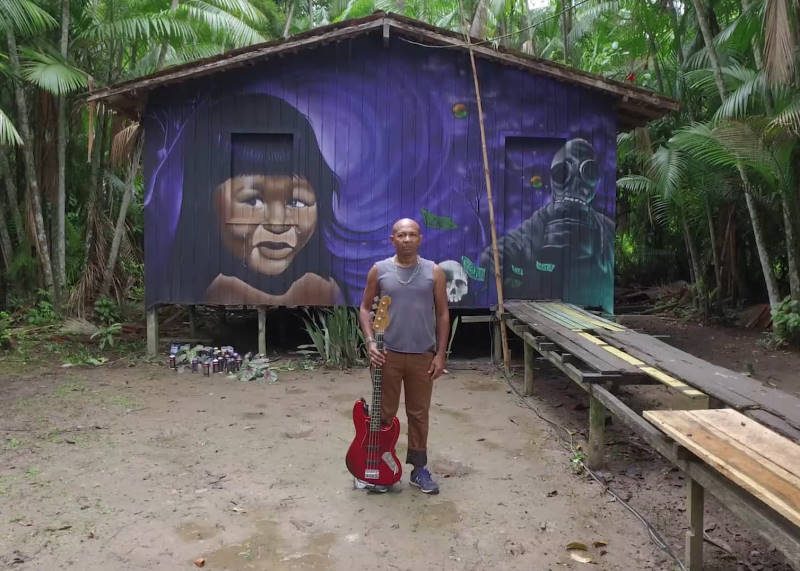 Murtinho acknowledged that the film only scratches the surface of the music and culture of northeastern Brazil – including these specific accomplished musicians inevitably meant passing over others – and his vivid recapitulation of a few evocative musical genres of the region inevitably leaves a viewer thirsting for more. From its first and last shots on a tiny tributary, peaceful yet bursting with forest sound, the film both documents and embodies the influence of the Amazon on the surrounding communities.

“We were born out of the rhythm of the water,” says one observer, and the meaning of the river, musically and culturally, is the visual and narrative spine of the story. One after another musical “character” – Murtinho’s term – offers an aphorism to add to the artistic wisdom running through the film. “Life isn’t enough,” says Paulo André Barata. “You need poetry, you need music,” you need all the arts. Spend a couple of hours watching Barata and others perform, and you can be persuaded that they are in fact everything you need.

The range of genres Murtinho managed to combine into his available hours is impressive. Classical, jazz, “brego,” “technobrego,” bolero, and more, much of it grounded in various forms and methods of guitar. In the comments of the different players and fans, there is also a comic undertone of competition – they name their favorites and dismiss others as “noise” or worse. Waldo Squash, a composer, musician, and DJ of “technobrego” – a raucous, rave-happy version of the quieter brego – gives the film its name, celebrating the communal delight in his band’s “Amazônia Groove.”

The various performances are brief but often magical. Fisherman, singer, and blind seer Mestre Damasceno leads a homemade, second-line style band through his otherwise sleepy riverside village. Musical matriarch Dona Onete declaims incredibly joyous boleros with her own band and an impromptu collection of the film’s participants in a closing performance literally floating on the Amazon. A remarkable sequence is recorded from above, bird-like with a drone, in the “City of God” – a forest-hidden landscape of eroded, alluvial stone where music composed from bird-sound seems to rise directly from the landscape.

Intriguingly, the various musics sound both Brazilian and Caribbean, and one musician recognizes threads from Africa, Spain, and the reverberations of Caribbean radio (a stew recalling the flavors of a 2018 SXSW favorite, A Tuba to Cuba).

Murtinho emphasized the “spirituality” of the music, the culture, and the Amazon, and exhorted his audience to preserve all these things as instrumental in the salvation of the world. Certainly the music can feel like various modes of prayer, and the infectious dance-rhythms can imagine the healing of all human ills.