High Flying Bird, a talky, high-wire drama about an NBA lockout, isn’t about the stock tropes most sports movies traffic in – the over-familiar, dewy-eyed “for the love of the game” messaging. Love isn’t what has brought these players and agents, owners and network bigwigs to near-blows. It’s labor.

The film (which premieres Feb. 8 on Netflix) opens in Week 25 of a lockout that’s left first-draft pick Erick Johnson (Melvin Gregg) in a tight spot. He’s been signed, just not on the dotted line, and every day the strike drags on puts him further in debt. In your standard-issue sports movie, Erick’s the star. But this isn’t your standard-issue sports movie. Instead, it’s his agent Ray (André Holland) who steers the course of the film, and sucks you in from the very first scene. In a chi-chi Manhattan restaurant, Ray swivels between scolding his prize client for bad financial decisions and reassuring him the lockout can’t go on much longer. Erick and his teammates are too essential. “In order to move merch and inspire rap lyrics,” Ray reminds him, “they need your services.” Because this is a business – one built pointedly on the backs of mostly black athletes – and Ray for one thinks it’s high time pro athletes reconsider their worth in an industry that will wither without them.

Director Steven Soderbergh – agile as ever in every medium and genre he takes a fancy to – shoots this opening scene with a fat wet raspberry to the 180-degree rule they teach in film school, about where to put the camera to make the audience feel like they’re watching a play, or a TV show, or any other entertainment enjoyed at a comfortable remove. Soderbergh (who shot and edited the film under his usual aliases, Peter Andrews and Mary Ann Bernard) places the camera – an iPhone, in fact – pretty much everywhere, to the left of Erick and Ray, then the right, then above like it’s swinging from a chandelier, and below like it’s stashed in a potted plant on the table. That here-there-and-everywhere skittishness gives Erick and Ray’s conversation a confidential feel, as if we’re not really supposed to be listening in. That feels about right for a movie all about backroom bargaining and stealth grabs for power. 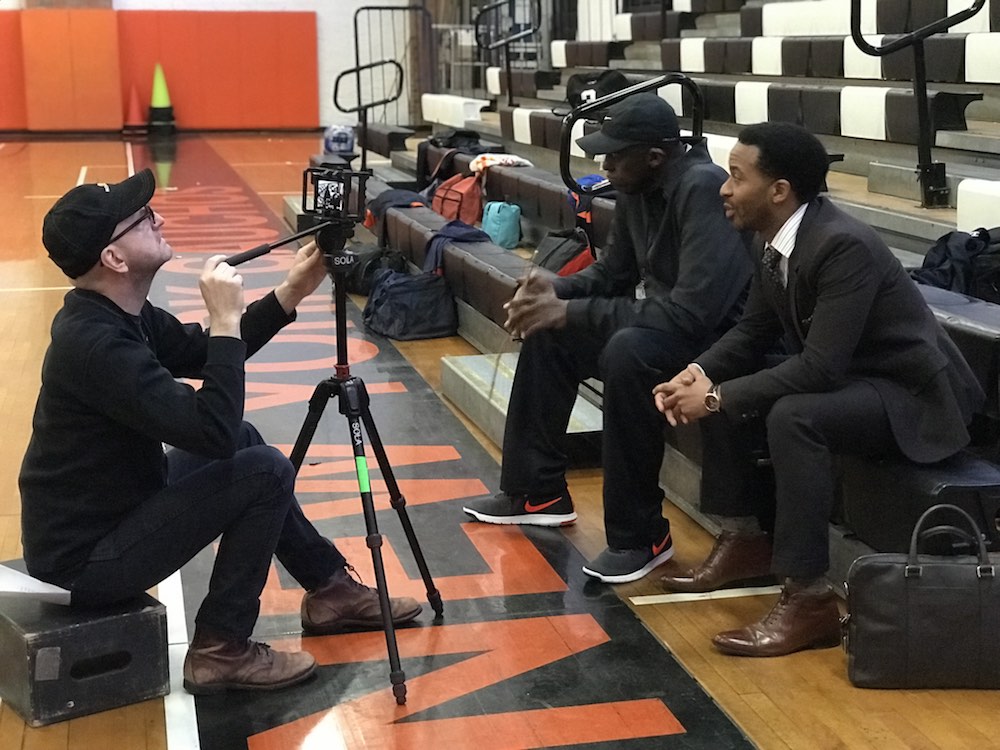 Ray is a man with a plan – to get his client back in the game, with or without an NBA assist. Oscar-winning screenwriter Tarell Alvin McCraney, who wrote the play Moonlight was based on and chairs the playwriting department at Yale School of Drama, intentionally withholds the tick-tocks of Ray’s plan to goose suspense. In the end, I don’t know that Ray’s scheme is so novel as to justify all the shadows and fog. Then again, in the end, I don’t think the plot is the point. (McCraney further subverts storytelling norms by introducing a mysterious manilla envelope at film’s beginning, a seeming MacGuffin – that is, a plot element that keeps the action moving but doesn’t actually mean anything. Surprise, the envelope means everything.)

What McCraney has constructed is essentially a series of ambitious two-handers, in which Ray spars with allies and foes, including his snappy former assistant Sam (Atlanta and Deadpool 2 breakout Zazie Beetz), who has a plan of her own; the beleaguered lawyer for the players’ association (Sonja Sohn); the owners’ rep (Kyle MacLachlan, Moe Greene with a Learjet); and a gruff South Bronx coach (Bill Duke) whose annual community center charity game gives Ray a platform to put his plan into action.

McCraney understands rhythm and melody. His dialogue has real musicality, and these actors – this cast is so good – deliver their lines accordingly; they know when to lean into the beat, when to sotto voce, when to sound the timpani. It doesn’t always sound like real life, but there’s no rule that requires art to feel real for it to have an impact.

But. Back to the iPhone. Soderbergh is a convert; he shot last year’s Unsane on one, and has pledged his allegiance to a medium that, yes, absolutely, can democratize the filmmaking process. But he’s kidding himself if he really thinks the audience can’t tell the difference between something shot on film, video, and a smartphone. And the effect of the iPhone’s “camera stock” – its familiarity from countless YouTube clips and home movies texted to Grandma – is, counterintuitively, to make High Flying Bird feel stagier. The iPhone’s video feels like real life, which ends up diminishing the artistry of McCraney’s highly verbal, soaring dialogue. It’s so real it feels, well, sorta fake.