Classic comedy and Texas writer/director to be awarded March 7 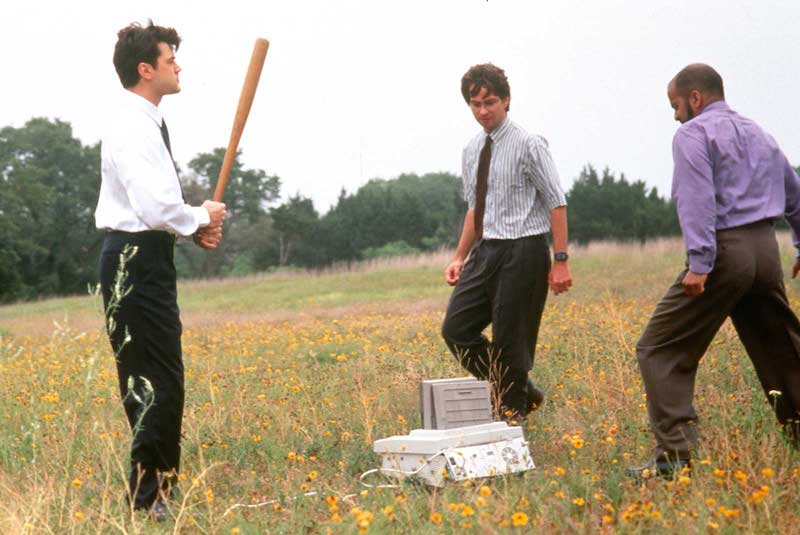 "Why does it say paper jam when there is no paper jam?" The classic Austin workplace comedy Office Space is added to the list of Texas Film Hall of Fame honorees, and gets a special 20th anniversary screening as well.

Hey, we're gonna need you to come to AFS Cinema on March 7. That's when the Texas Film Awards will honor Mike Judge's defining Gen-X comedy Office Space, as well as noted writer/director John Lee Hancock, as part of their 2019 ceremony.

It's 20 years since Judge's Austin-shot workplace comedy hit screens, and this year the movie receives the 2019 Star of Texas Award. Mike Judge will attend the award ceremony at AFS Cinema on March 7, but the night before (March 6) there will be a special cast and crew screening at the Paramount Theater: Tickets will go on sale to the public on Feb. 15.

As the other big honoree announced today, the Longview-born Hancock came from a family of football players (his father played for the Chicago Cardinals, while brother Kevin was on the Indianapolis Colts), and John Lee was actually a lawyer before moving into the movies. It's there that he has had a 28 year career as a filmmaker, specializing in underdog stories and antiheroes – especially their true-life tales. This year, that earns him a spot in the Texas Film Hall of Fame, alongside prior inductees like Sissy Spacek, Ethan Hawke, Kriss Kristofferson, Forest Whitaker, Amber Heard, and Guillermo del Toro.

Hancock established his reputation as screenwriter of his sophomore project, the Kevin Costner/Clint Eastwood dusty crime story A Perfect World, followed by his adaptation of Midnight in the Garden Of Good And Evil (again for Eastwood). However, he's also an established director: Beginning his career both penning and helming Hard Time Romance, he retold three Texas true life tales, starting with the story of baseball underdog Jim Morris in The Rookie, the beloved historical drama The Alamo, and, in a nod to his family's footballing legacy, feelgood sports drama The Blind Side. After a pair of non-Texas biopics (retelling Walt Disney's chase to film Mary Poppins in Saving Mr. Banks and the history of McDonald's in The Founder), now he's back in the Lone Star State as a writer/director for The Highwaymen. The film (which has already been announced for SXSW), focuses on Maney Gault (Woody Harrelson) and Frank Hamer (his old collaborator Costner), two of the Texas Rangers who chased and finally took down Bonny and Clyde in Gibsland, Louisiana.

The Office Space team and Hancock will join this year's other, previously announced honoree, Brooklyn Decker, who receives this year's Rising Star Award, at the award ceremony on March 7. Tickets are available now at www.austinfilm.org, and proceeds go to support the work of Austin Film Society, a 501(c)3 dedicated to building Austin's filmmaking and filmwatching culture.