A trio of chillers, but which do you want in your stocking? 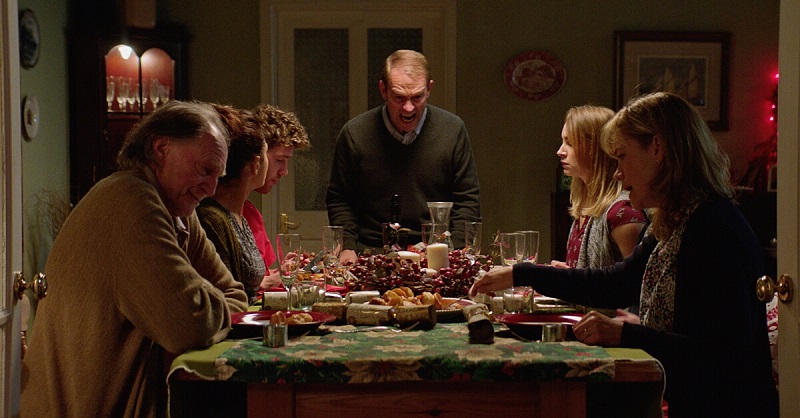 Hell is other people in holiday horror Await Further Instructions

Horror and the holidays go together like trees and tinsel, eggs and nog, presents and gift receipts. These days, it’s not just ghosts at the window or robbers at the door, but a whole panoply of Xmas scares.

Lo-fi British horror Await Further Instruction (MPI Home Video, Blu-ray, DVD, VOD) is a genuine cracker for the season, a tense tale of a family at Christmas that pays off with an unexpected snap. For his second feature, The Disappeared director Johnny Kevorkian sticks Nick (Sam Gittins) in his ultimate personal hell – home for the holidays with his family, from whom he very purposefully disconnected. However, his girlfriend Annji (Neerja Naik) has insisted that they try to mend some fences even though his racist, bigoted, small-minded family isn’t the forgiving or welcoming type. If the topic had come up, you can guess they would be hard Brexiteers – except for Abigail Cruttenden as the adoring mother who just wants everyone to make up and get through Christmas. Not that she would tell her husband (Grant Masters), with his stern and disapproving ways, or her granddad (the masterful David Bradley, best known for [deep breath] Abraham Satrakian in The Strain, Merlin in Trollhunters, Walder Frey in Game of Thrones, Argus Filch in the Harry Potter films), a surly old misanthrope who loves causing trouble.

Yet the script by Gavin Williams has a much more baroque and sinister turn to take when the family finds the house has been sealed up and there’s only one signal on the TV: a screen that simply says, “Stay Indoors and Await Further Instructions.”

The nature of their new isolation is an enigma that’s kept sealed until the very last act, and even then it’s kept under somewhat of a shroud. However, that’s not the script’s real concern. This is a near-flawless sealed-bottle character study about families, about isolation, about dependence on technology and authority figures. The Christmas setting may seem coincidental, but it’s the perfect time for the malevolent forces to strike – when so many people are sealed up together, and so easy to split apart under the tension. 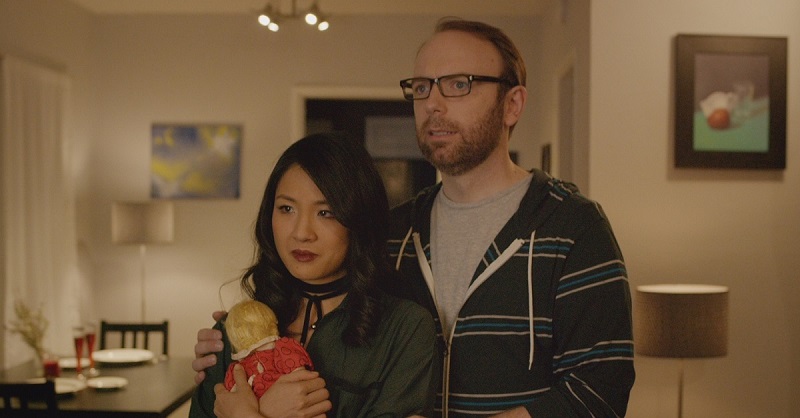 It’s a bad sign when you get to the end of an anthology film and can’t remember every segment with any degree of clarity. That’s sadly the fate of All the Creatures Were Stirring (on DVD, Blu-ray, and VOD from Image Entertainment), a white elephant gift selection of horror-and-holiday-themed shorts with a framing mechanism that, at bare minimum, gets points for originality, as a workplace schlub (genre regular Graham Skipper) convinces a coworker (Ashley Clements) to go to a local amateur dramatic performance of some weird new play. It’s an intriguing set-up that gets completely undercut by the fact that most of the segments are half-conceived, lack a real pay-off, or (in the case of Rudolph vengeance tale “Arose Such a Clatter”) taking their plot from the video for “No One Knows” by Queens of the Stone Age. It’s a real shame, considering the talent roster (Skipper, House of the Devil’s Jocelyn Donahue, Amanda Fuller, Ashley Clements, Maniac 2012’s Megan Duffy), but if this was an office white elephant party, most of the gifts had been picked up from the gas station on the way to work.

The saving grace is the closing installment, “In a Twinkling,” starring Fresh Off the Boat’s Constance Wu as Gabby, a guest at her friend Steve’s Christmas Day party. Well, it’s only “his” party because Steve (Morgan Peter Brown) has it inflicted upon him by Gabby and the rest of Steve’s friends, who can’t work out why the old grumpy guys won’t share in the season of joy. Their intrusion is a bad idea, since Steve has a really good reason for not keeping the season. Quirkier than it is scary, it’s as charming as finding a nice spiced almond in this extremely mixed bag of nuts.

“Let’s hide from Santa over here! He’ll never see us!” “Pretty sure he can’t see us now.” Murky goings-on in Christmas Blood.

Norwegian seasonal slayfest Christmas Blood (Artsploitation, on DVD and VOD now) aka Juleblod is the latest by Scandinavian sleaze-meister Reinert Kiil, the (a-HEM) auteur behind the schlocky Whore and meta-schlock Inside the Whore (stay classy, Norway!). It makes the cardinal mistake of any Xmas horror: Never make the people being butchered less appealing than the real life humans you’re trying to avoid by watching a movie. Unfortunately, the annoying college friends headed to a remote village for the holidays are so irksome that you … well, you won’t be hoping for their grisly deaths, but if a sudden snowstorm stopped you from making the flight to hang with them, you wouldn’t be upset. The fact that a deranged killer who has spent 13 years in a mental institution is loose and has dressed as Santa to finish dealing with his naughty list doesn’t make them any more sympathetic.

This is slam-dunk Christmas horror (if super-derivative), so how do you botch all this? Aside from the uninteresting victim pool, there’s a killer with fundamentally weak motivation and a back story that’s cobbled together from scraps of the far superior (and that’s saying something) Silent Night, Deadly Night and Halloween. Then, someone decided to shoot everything at the wrong F-stop, so the entire film looks like the projector bulb is dying. The only flinching you’ll do here is from eye strain.

There are two interesting components: First, some great kills and gore – but then they’re swallowed by the yawning black abyss of the photography, so it’s hard to tell severed head from snowman. Then there’s the two cops – embittered alcoholic and fill-in-Doctor-Loomis Thomas Rasch (Stig Henrik Hoff, chewing all available scenery) and the new detective on the case, Terje Hansen (Sondre Krogtoft Larsen) – who get the few glimmers of character development to be found here. The rest is just raw giblets.