Interstellar Friendship in Elijah and the Rock Creature

Sometimes a thousand words just isn’t enough. This is what visual artist Jen Walden realized when taking the leap from static images to moving ones four years ago. After three shorts, Walden is back with her first feature, Elijah and the Rock Creature, which has its U.S. premiere at the Other Worlds Austin SciFi Film Festival this weekend. 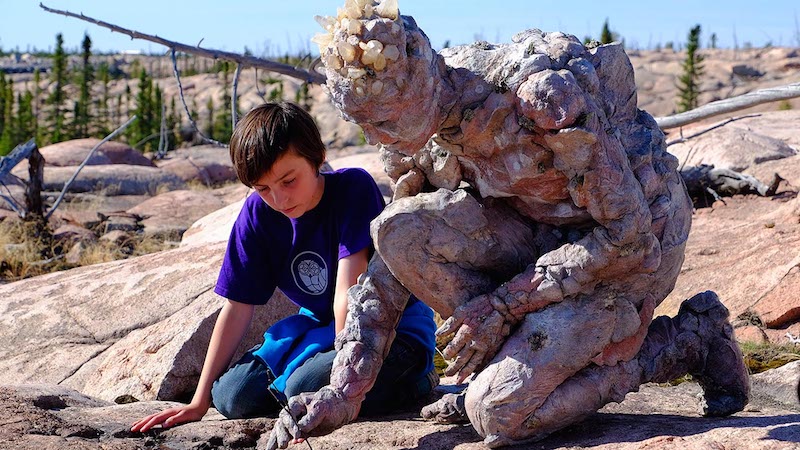 The film tells the story of two boys, Elijah (Ben Naugler) and Eltanin (Thompson Duff), who are similar in many ways but fundamentally different in one: Elijah’s human, while Eltanin’s the titular rock creature from another planet. They stumble across one another in the middle of Wood Buffalo National Park, soon discovering they are both lost and looking for their mothers. This revelation bonds the odd couple, and the pair set forth to help each other find their way home.

“I wanted to make something that was beautiful with an aesthetic that shows off the North but that also carries an emotional weight,” Walden said. “Something that can move the audience through both visuals and emotional impact.”

And show off the north it did. Hailing from the Northwest Territories of Canada, Walden spends much of her time hiking and exploring the region with her family. This rocky, tree-filled terrain served as the direct inspiration for the film – Walden conceptualized the story and wrote the script as a way to show her appreciation for the area and spotlight its natural beauty. “I thought it would be really interesting to set a story about a young kid in the same environment where I spend time with my children,” Walden said.

Walden thought up the idea of a rock creature after observing how her children experienced and interacted with the environment. Watching them create a world of their own through their imaginations moved Walden to include a fantastical element in her film, which ended up being Eltanin. His look was heavily influenced by the landscape itself; his humanoid form is made up of rocks and covered in lichen, with crystals sprouting from the top of his head. Walden crafted Eltanin with help from special effects makeup artist Matt Aebig and her own children. “I would show all the sketches to my kids – aged six and eight at the time – and get their feedback on if they thought the creature looked too scary, too weird, et cetera."

Though lighthearted, Elijah and the Rock Creature revolves around some heavy issues, with much of the emotion fueled by the recent death of Elijah’s father. Early in the movie, Elijah’s mother (Allie Dunbar) tells her son they are connected by an invisible string, assuring she will always be able to find him. The film explores just how far this string stretches. “I think this film speaks to both adults and children,” Walden said. “Even though the story follows a young boy and a creature, it still touches on bigger themes, like processing grief and family attachment.”

Being an indie feature directed at kids (and a sci-fi one at that), Elijah and the Rock Creature occupies a unique niche that low-budget filmmakers rarely visit. Walden notes that many people are surprised she would choose to make this kind of film, but are grateful nonetheless. “I think there are many parents like myself who get tired of there being limited styles and storylines being presented to our kids,” Walden said. “I think kids appreciate something different more than we give them credit for.”

Throughout the making of this film, Walden has enjoyed immense support from her community in the Northwest Territories, with much of the cast and crew composed of locals. Crowdfunding on Indiegogo provided the project with needed resources, as did a grant from the NWT Film Commission. Ultimately, Walden wants her film to serve as a showcase for a place near and dear to her heart.

“The greatest reward has been sharing this film with the rest of the world,” Walden said. “I hope that people are moved by the story, and that it peaks their interest about the North and where the film was made.”

Elijah and the Rock Creature plays at Other Worlds Austin, Sat., Dec. 8, 11:20am. Free for anyone under 15. More details and info at www.otherworldsaustin.com.

For more on Jen Walden's art and films, visit www.waldenpaint.ca.