Frankie Muniz melts down – literally – in this psychodrama 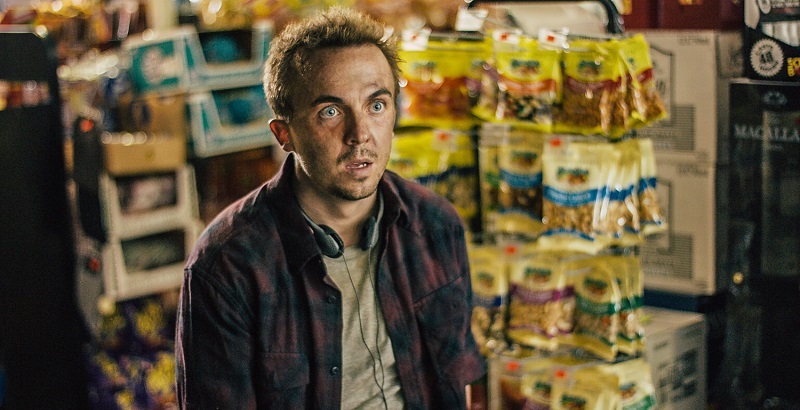 The tension of most horror films is in having a character experience something that sounds like madness. That's why so many directors have found a particular sense of unease in having an unstable protagonist go through what they are sure is a very literal hell.

Jonathan (Frankie Muniz) is on a rough slide already: His friends are all starting college careers, but he's reduced to watching the world go by as he spends nights at what he calls "a lifestyle experience boutique" (aka grimy liquor store). His boss/best friend Eric (Blake Webb) could seemingly not be happier that Jonathan's got a date, even if it's with a stranger from the other end of a TV-advertised, premium rate phone sex line (which, astoundingly for the age of Tinder and Grindr, still exist). So when Dena (Chelsea Edmundson, last seen as Officer Jim's ex-wife in Thunder Road) ghosts after a one-night stand, no one is that surprised – that is, right until Jonathan starts busting out in vile pustules and seeing puddles of dark, bubbling filth on the walls.

STDs and horror have gone hand in claw for centuries (what is a vampire if not a blood-borne disease communicated through the exchange of bodily fluids?). However, The Black String adds a supernatural twist to recent entries to the body horror canon (like venereal shocker Bite) and invokes something more akin to the psychotic chills of It Follows – just with more weeping sores, mystical horrors, and mental meltdowns. Yes, Jonathan is such a waste of space that he's forced to rely on the advice of a roadside, tarot-card-reading, Stevie Nicks-esque witch (Mary K. DeVault).

With a script co-written by Richard Handley, first-time director Brian Hanson's lo-fi indie horror keeps the viewer in a fun, sometimes grisly little guessing game about what's really going on. Is Jonathan actually at the center of a trans-dimensional conspiracy, or is he just going crazy? Inevitably, much of the unnerving energy depends on Muniz, who deploys his trademark brand of wired and wiry energy to keep the reality of the insanity ambiguous until the closing moments.