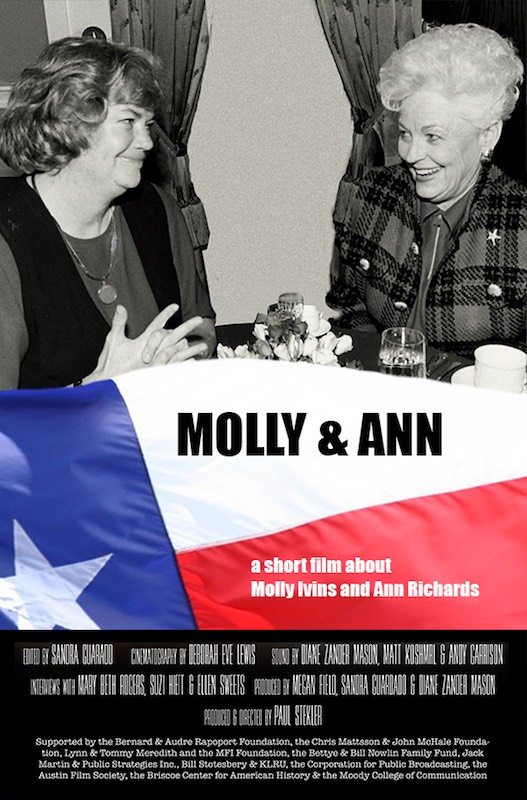 There aren't many iconic Texas political figures, and in a state not known for its progressive approach to anything, the glass ceiling often seemed thicker here. The importance of Gov. Ann Richards and reporter Molly Ivins bursting through at around the same time is not lost on Paul Stekler, and he has the footage to prove it.

This weekend at Austin Film Festival, the documentarian and former director of the UT RTF program debuts a double bill of shorts on the dirty work that was Texas politics in the Nineties: First a 40-minute redux of 1996's Vote For Me: Politics in America (a fixture in politics and journalism classes at UT-Austin), then a new work from old footage, "Molly & Ann."

The 20-minute short is an unabashed love letter to the two women, "but they deserve it," said Stekler, "and they deserve to be remembered." He added, "Besides being pioneers, they were just amazing. You go back to Molly's writings and it's exhilarating. She was famous for the books she wrote in the Nineties, the stuff on Bush, but go back and look at what she was producing on a biweekly basis, and it's astounding. Incredible investigative writing, and really funny. She was inventing a really interesting voice, a really different voice, and the same with Ann. For people who were not alive when she was here, it's hard to describe just what an incredible speaker she was. There were literally times when I saw her, and I was laughing so hard that I almost fell off my seat. She was an incredibly important person in terms of the way she expanded the people who participated in power in Austin."

"Molly & Ann" will screen with that re-edited Vote For Me, and the core of the revamped version is footage that has fallen into lore: Sen. Rodney Ellis, D-Houston, miced up on the Senate floor, pressing the flesh and working the floor on a bill that could help diversify the judiciary. Seeing and hearing the work needed to get a bill passed may seem prosaic to political insiders, but there were repercussions for giving audiences these ringside seats. "After we were all done," Stekler said, "the legislature made sure that nobody would ever see anything thing like that again, because I think it's now against the law to wander onto the floor of the state Senate wearing a microphone." 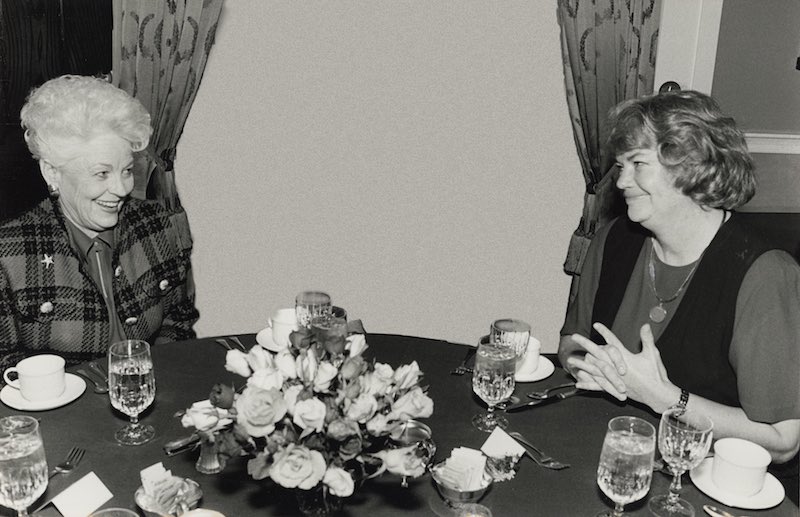 "They deserve to be remembered." Paul Stekler pays tribute to Gov. Ann Richards and journalist Molly Ivins in "Molly & Ann."

Austin Chronicle: So what convinced you to revamp Vote for Me in this shorter version?

Paul Stekler: Twenty minutes was too short for an entire program, and so I thought, well, what can i do that would make it into an entire program. As proud as I am of Vote For Me, it's not like it's been seen by a billion people, and it was easy to put together a 40-minute revised version, just trimming it down and giving a lot more play to the Texas stuff. ... It's there in service of the premiere for the "Molly & Ann" film.

AC: So where did the idea for that come from?

PS: I had done short pieces on Molly Ivins and Ann Richards right after they passed away. I had all this footage that I'd shot of them, much of which I'd never used in films – it was part of the TV show, and it was also in part because they were friends, people I liked a lot.

“[Gov. Ann Richards] literally grabbed the back of my shirt and asked me how our film was doing. I looked at her and said, ‘Governor, as soon as I see you in the editing bay with me, it’ll be our film.’”
Afterwards I realized that we had these little pieces that played on the show on PBS stations across Texas, but that wasn't exactly a large audience. So I thought the material, made a little broader, should live long enough so that people would remember who they were.

As time went on, I really wasn't sure how to do it, and procrastinated. At different times we would put it together, and it just didn't quite work right. Then earlier this year I said, "Either I do this, or I'm not going to do it. I need to concentrate. It's been 10 years since they passed away, and they were two amazing women who were ahead of their time." So I was away this summer – I had a month at the mountains, over on the Cascades – and I took the footage, and I took a bunch of other stuff I hadn't used, and I looked at it, and I got this idea, mostly from friends trying to encourage me to find a way to make the pieces connect to today's politics, to do something with the Women's March in 2017.

We found some good footage that some young filmmakers had shot ... They had this wonderful woman, Suzie Cole Hiett, interviewed, and at the very end Suzie goes how much she wished [Richards and Ivins] were still alive, because that's what they fought for their entire lives, and that throws it forward, and connects Molly's piece and Ann's piece to today's politics, and the whole idea of them being ahead of their time, which they were. There were very few women in positions of political power like Ann, and when Molly started writing at the Texas Observer in the 1970s, there were not a whole lot of women who were political writers.

AC: Was there any temptation to make this a full feature?

PS: Not for me. I think that they were complex human beings, and if you read, say, Bill Minutaglio's biography of Molly, or if you talk to people who were close to Ann, you could do longer pieces on them. There's a couple of people doing pieces on Molly right now, and there was a film about Ann a few years ago that I thought was OK, but I think what happens is that there's a kind of iconography around them, and then there's their actual story. As I said, they were complex human beings, and how do you deal with that? I really liked them as people, I thought they were really important folks, and I thought that a shorter piece was right for me. And having spent seven years dissecting George Wallace (for 2000's Settin' the Woods on Fire) I know what it takes to do a real biography, and I felt more comfortable with this as an introductory piece.

And also, it's a much more personal piece. This is who they were, mostly talking to me – which I still find, in retrospect, astounding. The fact that I knew them enough to say I'm doing a personal piece about them. I wasn't close friends, but I knew them both. I spent time off and on with Molly, and I was close enough with Ann that at one point when we were doing Last Man Standing, the political film we did in 2004, that I bumped into her and she literally grabbed the back of my shirt and asked me how our film was doing. I looked at her and said, 'Governor, as soon as I see you in the editing bay with me, it'll be our film.'"

"Vote for Me: Politics in America" and "Molly & Ann"

Watch George Wallace: Settin' the Wood on Fire on Vimeo.

Find more of our coverage, including news, reviews, and interviews, at austinchronicle.com/AFF.