Into the Night With Joe Taslim and Timo Tjahjanto

Indonesian action flick The Night Comes For Us pulls no punches 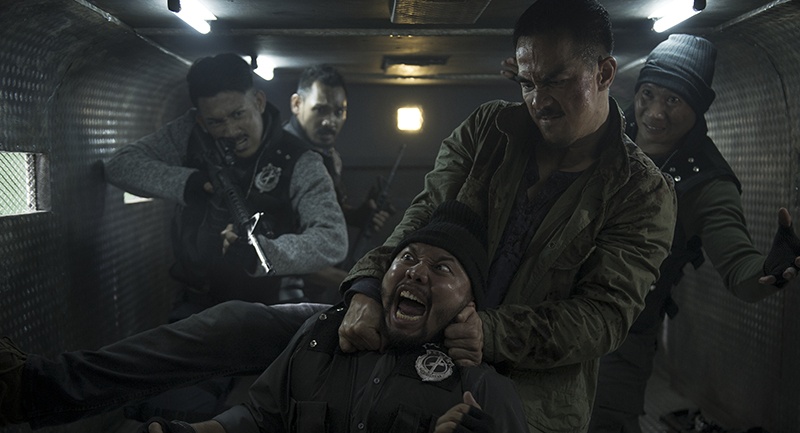 Joe Taslim, busting heads and kicking ass in The Night Comes For Us, the new Indonesian acton film debuting on Netflix today

Want to make Joe Taslim happy? Tell the Indonesian action star that his fighting style is reminiscent of the bone-crunching impacts of the mighty Sonny Chiba at his prime. "Sonny Chiba is cool," said Taslim, smiling.

In The Night Comes For Us, which debuted at Fantastic Fest and reaches Netflix this weekend, Taslim plays Ito, a member of Triad enforcers the Six Seas. His career of extreme brutality seems set to come to a halt when he abandons his post to defend an orphan (well, to clarify, she's an orphan only because he just butchered her family). He goes to hide with his old gang, the brothers, but the Triads aren't so keen on his retirement. Enter Arian (Taslim's costar from The Raid, Iko Uwais): Another brother, another member of the Six Seas. Then there's the mysterious Operator (Julie Estelle), who seems hellbent on stopping both.

Director Timo Tjahjanto (Macabre, Headshot) described the story as about "bad guys who are really bad at doing good stuff, but really good at doing the bad stuff." His approach to the narrative – and its bloody succession of fight scenes – was inspired in part by the interpersonal dynamics of Heat and in part by the ultra-violent US 80s action films like Cobra, early John Woo ("violent characters suddenly showing a spark of over-sentimentality"), the Keith David/Rowdy Roddy Piper scrap in They Live, the sauna fight in Eastern Promises, and the universal amorality of the Grand Theft Auto games. "I kind of like the idea of having characters who are never really good. For example, with Ito being the protagonist, there's a huge possibility that people will be turned off by what he did in the past. So I'm not exploring that part, but we're here right at the moment where he's on the cusp of trying to be better."

Austin Chronicle: Joe, Ito is a very different kind of action hero, and not always that heroic. What attracted you to the part?

Joe Taslim: He's an anti-hero who has been in the darkness for so long, who joined the Six Seas because one of the Brothers did something and he needs to fix it. But by joining the Sixes, he killed a lot of people – all the massacres – and he's not happy with it. It's this accumulation of conscience that every day is trying to get out. The symbol of salvation is that little girl. He looks at her, and she looks back, and the miracle of humanity strikes. From there he takes a big, huge risk, trying to get out but no matter what, this karma of what he did in the past is always catching up, and he has to sacrifice a lot.

AC: There's that great line where someone says that the worst person for her to be around is Ito, because he's such a bullet magnet.

Timo Tjahjanto: The idea behind it is that, in a world of bad people, to maintain that innocence is such a fucking hard job

AC: But come for the morality, stay for the fight sequences. How do you make them all different, making them not feel like, OK, here's a cool sequence, but they have to fit into the script, and then Ito spends the whole film getting more and more beaten up, and less and less elegant?

“You know that Simpsons episode where Homer’s becoming a boxer, and people find out, oh, his strength is not in his fighting, but his inability to get hurt. A punch connects, but it takes time for him to feel the pain. That was my approach to Ito”
TT: There's a bible to this film, a set of rules that we agreed on for making the choreography. I'm working with a lot of people who were involved in The Raid, but in terms of technical prowess and slickness, I knew I could never compete. So instead of having a guy called Iko, who's really slick, really fast, really like a jaguar, let's have a guy who's unconventional as far as Asian heroes go. [Taslim's] more like a brute, almost a meathead, a hulking character. That approach works really well in the sense that, by the time the film starts, he's an enigmatic character. We hear of the horrible things that he's done, but we never really see it. So my approach was, maybe he doesn't know how to kill people straight away, but he's definitely a guy who refuses to stop.

You know that Simpsons episode where Homer's becoming a boxer, and people find out, oh, his strength is not in his fighting, but his inability to get hurt. A punch connects, but it takes time for him to feel the pain. That was my approach to Ito.

And the first fight, I want to shock people that this is as bloody as it gets. Me coming from a horror background, I tend to embrace the bloodletting, but at the same time it's clumsy and messy. When we go to Arian's fight, it intentionally feels more slick, and then when we go to the operator's fight, it feels flashy, it feels showy, and at the same time more youthful. But it all builds to the final fight, which is more emotional.

AC: One of the strange parts of action films is that you'll have an impact and you'll think, 'wait, no, you hit someone that hard, you break their leg. They don't just get back up.' With you coming from a horror background, is that liberating, knowing you can push the violence further?

TT: Here's the thing. Coming from Indonesia, the idea of showing too much violence can be a problem. It all comes back to censorship, it's all back to rating systems, which is a big headcahe for filmmakers who tend to explore the violent side of things. This is where Netflix is really a savior for me. It has its specific set of strengths, and me being able to go, OK, it's OK for me to show this, and they go, by all means, then that's liberating.

I love action films. I love the Mission: Impossible films, and they do things that we can only think of. But one thing I personally dislike is this idea of people getting punched and kicked without any aftermath, without any apparent damage that's done to their bodies. I love to explore the trauma that certain blows can give to the human body.

AC: That's where the Sonny Chiba comparison comes in.He was never subtle He hit people really hard, and that was part of his appeal to Western audiences. You had so many martial arts actors who were trying to be Bruce Lee, and suddenly there's this guy like Lee Marvin. 'I'm just going to hit you until you fall down, and then I'm going to hit you some more.'

TT: And even before Chiba we have someone like Toshiro Mifune. If you really look at it, they are unconventional from an Asian perspective. Bruce Lee was a lithe person who's relying on speed – much like Iko.

AC: But if anyone ever does a remake of Viva Chiba ...

The Night Comes For Us debuts on Netflix today. For more coverage of Fantastic Fest, visit austinchronicle.com/fantastic-fest.