Aiming for the Big Kill

Scott Martin on the inaccurate West in his new gunslinger flick 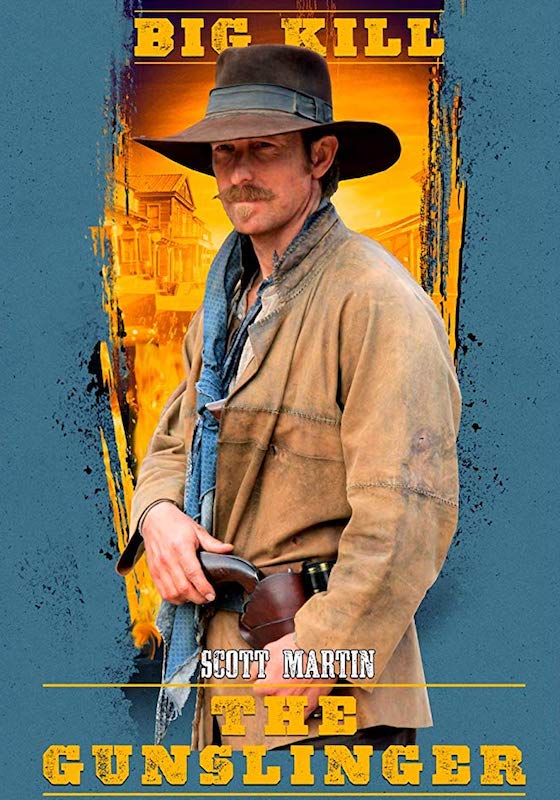 Scott Martin in Big Kill
Forget the myth. Western gunslingers drawing a lightning fast bead, and plugging their opponent with deadly accuracy? Never happened. When Scott Martin headed to the frontier for Big Kill, he made sure his gunfights were messy and rare. "People didn't want to be in those gunfights," he said, "They just wanted to get the hell out of there."

Take the most famous stand-off in Western history. Martin said, "In the real gun fight at the OK Corral, they were six feet apart, and they were missing each other left and right. That's just how it was.

In Martin's new film Big Kill (which he wrote, directed, and stars in), it's a messy West. Guns-for-hire Jake (Morris) and Travis (Clint Hummel) have been run out of Mexico, and take the first available job: Escorting genteel accountant Jim (Christoph Sanders) to the two-horse town of of Big Kill, Arizona. Neither the trip nor the destination are all that welcoming, and violence – no matter how inept – always seems a hair trigger away. "There were some gunfighters out there who were very good shots under pressure, but in general, no. I wanted to show that, there's a lot of missing."

It's the kind of fight where a shotgun is more use than a Colt 45: Even if you couldn't hit the broad side of a barn, it's louder and scarier. That's why Jake carries a short-barrel revolver with him, as well as his longer six-shooters. "That's for right across the table," said Morris. "That's about as far as you're going to hit anything with that gun."

The choice of weapons came from long discussions with costume designer Toby Bronson, which were all part of Martin's vision for this off-beat but very traditional horse opera. He said, "I wanted a lot of color in the movie. I don't want it to be bland or plain, and so in the costumes, that's part of it. Each character comes from a specific point of view, so their costume needs to signify that. For Jake, he's a much more practical person – terrible gambler, but a practical person – so he just wants to live his life. He always gets run out of town, so what he's wearing is much more practical. It's whatever he's picked up along the way." That can be tough, since his better-dressed cohort Travis has a bad habit of getting them both into trouble. "He's the ladies' man," said Martin. "He's the one that will clean up and look nicer."

That said, the pair aren't complete without each other. Martin said, "I always say, Travis keeps Jake from becoming a full-blown outlaw, and Jake keeps Travis alive. "

There's menace aplenty facing the pair, courtesy of a hammer-cocking ensemble that includes Danny Trejo, Jason Patric, Michael Paré, and Lou Diamond Phillips as Johnny Kane, who Martin described as "a sociopath who's a dangerous killer who's very charismatic, so it's not very easy for someone to play, and he just nailed it. [Phillips] is fantastic, and we were lucky to get him."

Austin Chronicle: So the obvious question: Why a Western? They're such a fraught genre, and it's seemed like it was impossible to do a straight Western, not a Western as a metaphor or with a twist?

Scott Martin: I love Westerns. I've loved Westerns my entire life, old ones and new, and I don't have a problem with people doing other things with Westerns. But my personal take is more straightforward, and because people are doing blends and genres, in my opinion there is space for the straight Western, because there's not a lot out there like it.

I actually wrote it 12 years ago, and the inspirations were more in line with a Butch Cassidy and the Sundance Kid or Silverado, mix in a few of the Westerns from the sixties, a few Spaghetti Westerns, rather than the newer ones.

AC: You even evoke that by going for a classic Cinemascope look and aspect ratio.

SM: We definitely went for that. We specifically shot it like that to get the scope of the landscape, of the world, of the place they are. ... The locations were everything. They're a character in themselves, and you're looking for these big expanses for the travel shots, and it's all there in New Mexico. We had to go round and look and find them, but they're there.

AC: You do go a little more unconventional for the score. What was the inspiration there?

SM: There's a sort-of Western called The Good, the Bad, and the Weird. Wonderful movie, fantastic movie, and the music is so cool. It's unique, and it's got a blend of the modern and the classic Western, and what I wanted to do was a blend of the spaghetti Western feel mixed with the big brass of the American Westerns, and mix in some of the more contemporary and modern sounds, and blend those together, because that's what the movie.

Kays (Al-Atrakchi) who did the music, we spent a lot of time together. We found a song – in the horse chase out of Mexico, we actually found this Russian shaman lady called Olena Uutai, who does these songs where she plays a mouth harp and while she's doing that she creates animal sounds. We thought it was so unique, so weird, and so cool, we thought, that's got to work.

AC: You're one of a recent bunch of filmmakers – Ike Barinholtz on The Oath and Jim Cummings on Thunder Road – who wrote and directed and starred, and then you edited your film as well. At what point did you decide to wear so many hats.

SM: It wasn't a planned thing. Originally, 12 years ago, I was just going to write it and act in it, but as I progressed in the industry and it got to the point where we were able to make the movie, it just fell into, well, I'll be the one directing it, and then it got into the editing, I had someone helping me put it together, and then I found myself going back in and re-editing scenes as I saw them, and it kind went from there. I just started editing it, and then we went over to 424 Post, and had them come in and work on it. Those guys were fantastic, and Tim (Tuchrello) over there was great, and then a little clean-up, and that was that.

AC: So why did you decide to play Jake, the aging gunslinger? If you'd made this 12 years ago, I could see you as Jim, but 12 years puts a lot of road on us all.

SM: Ain't that the truth? I was originally supposed to be Jake, and I wrote it with me in mind to play Jake, and Clint to play Travis. Waiting 12 years, we grew into the roles. It probably wouldn't have come out correctly if we tried to do it 12 years ago – we probably would have just been too young, too smooth, too clean, and it wouldn't have had the same impact. Those two characters aren't old, but they're road-weary. They've been riding for 15 years, 20 years, and it shows. Us getting a little older, we fit right into those characters.

Big Kill opens in Austin this week. For review and showtimes, see our listings page.