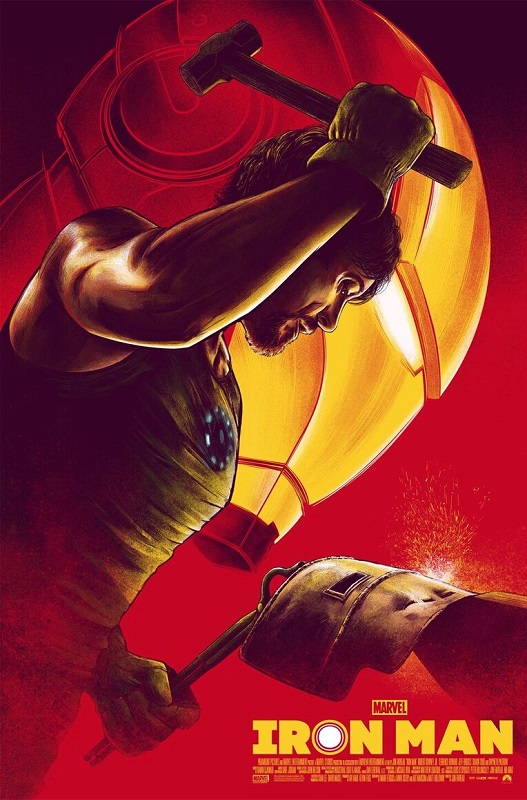 Remember 2008, when the idea that the whole movie release calendar would be built around superheroes was laughable, and the suggestion that the Avengers would be a bigger, more reliable cinematic franchise than Star Wars would get you laughed out of Hollywood? Local printhouse and gallery Mondo does.

Tonight, the Austin-based Alamo Drafthouse spin-off celebrates 10 years of the Marvel Cinematic Universe with a special show looking back on the complete legacy, that went from Robert Downey Jr. lending his star power to make Iron Man a possibility, to the massive ensembles of Avengers: Infinity War.

Of course, Mondo has been with them pretty much every step of the way, starting in 2011 with Captain America: The First Avenger prints by Tyler Stout and Olly Moss. Mondo Creative Director Eric Garza said, "What Marvel Studios has accomplished over the last 10 years is nothing short of remarkable. They’ve given us heroes that are big and small, mighty and cosmic, while telling incredible stories that are often sweepingly epic while at the same time nuanced and personal."

The show is being kept under the tightest of wraps, but here's the first image: César Moreno’s depiction of the pivotal moment when Tony Stark hammered the original jerry-rigged Iron Man armor into shape in a cave. You'll get to see and buy prints of it, plus what we can only expect to be a super team-up of art, starting tonight with a special preview show at the gallery at 5pm. Plus, for you early risers, there's a special family day tomorrow, Oct. 13, starting at 10am, with cake and entertainment (costumes most definitely encouraged).