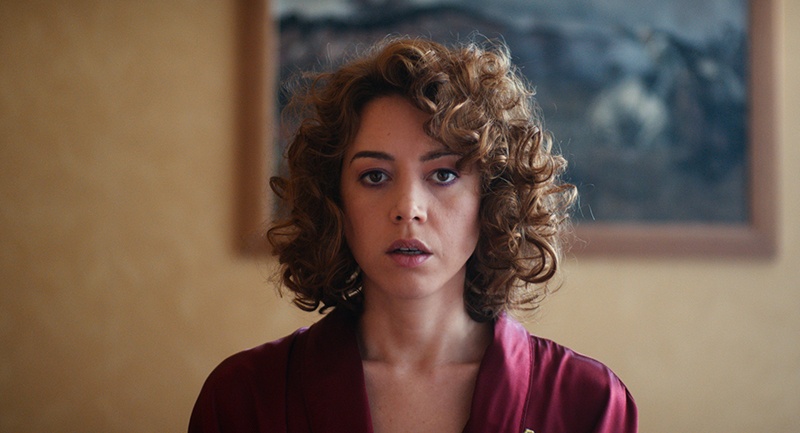 When a film is so unique that it's hailed on arrival as a cult-to-be-, it can be a blessing and a curse for a filmmaker. That's part of why Jim Hosking has taken a major turn from the sleazy and shocking into that strangest of territories: the rom-com.

By Hosking's own admission, the bizarre world of An Evening With Beverly Luff Linn is a deliberate turn away from his purposefully off-putting debut, The Greasy Strangler, with its disturbing nudity, bizarre prosthetics, and showering in a car wash.But don't expect it to obey the slushy, mushy norms of the genre. It has all the hallmarks of Hosking – but not necessarily the ones audiences expect after his gross-out debut. It's a world of bri nylon and awkwardness, where Lulu Danger (Aubrey Plaza) runs away with gangling hitman Colin (Jemaine Clement) after he steals back the money her husband Shane Danger (Emile Hirsch) ripped off from her brother Adjay (Sam Dissanayake). But is she really interested in Colin, or is it all just an excuse to get to her real object of her desire, the mysterious Beverly Luff Linn (Craig Robinson)?

That who's who of comedy talents is a massive change for Hosking, who made his reputation with far-far-far-left-of-center shorts like "Doctor" (about a doctor who has grown a mustache on his bottom), mostly with first-timers on his cast. For his second, and much bigger projects, he aimed high on his actors. Bosking said he had hoped he could get Plaza, but never expected her to respond when he sent her the script ("I just couldn't imagine she'd ever want to do this. Maybe I just thought she was so funny and so idiosyncratic"). She actually contacted him in a matter of hours: not only was she interested, but she had seen The Greasy Strangler, and had watched "Doctor" about 50 times. "I had a Skype with her – I think it was about one in the morning in L.A., and it was 9am for me in the morning – and we talked for about an hour, and had a really funny conversation. and at the end she said, 'look, I really want to do this.'" Austin Chronicle: One distinguishing trait of your work is amazing character names – because Rodney Von Donkensteiger is a great name.

Jim Hosking: This was written with a friend of mine, Dave [Wike], and the way this whole thing started was that he sent me a scene on an email, saying, 'Hey, I've written this scene. I don't know what it's for, but if you like it, just take it from here and right something with it.'

So he sent me a scene with Shane and Carl (Sky Elobar) and Tyrone (Zach Cherry) from the coffee shop. That scene's not in the film, but Dave came up with the name Shane Danger, and Tyrone and Carl, and I guess their last names we would have both come up with. But with the other characters, everything is an opportunity to make something memorable, just make it more fun. With Rodney, in our heads we had a guy who looked a bit like Michael McDonald from the Doobie Brothers, and had no chin like George Lucas, and wore a cream roll-neck jumper that would have been tucked into slacks, that would have had a thin patent leather belt with a gold buckle. Just put together, having endless brunches, and farting when he's back in his room.

There was something funny about the tragedy of this character, and his pompousness and self-righteousness, and he's quite bigoted and withering. So Von Donkensteiger is a pretentious and portentous name, and then Rodney is just terrible, tragic. You're never going to go places if you're called Rodney.

There's always something funny for me when things don't quite go together. It's a bit like that with Beverly Luff Linn. I can't quite remember how we ended up there, but we were definitely looking for a first name that would have been a man's name or a woman's name, and we definitely would have talked about Francis. And then Luff Linn, I wanted a double barreled named, because that always sounds quite self-important and pretentious. And they're two words that just don't go together. The word Luff just isn't a real word. It shouldn't be in anyone's name.

“It just feels a bit more tragic when things happen in a more realistic, ponderous pace – a bit like they would in a documentary. Life doesn’t unfold in this frenetic pace. Things just happen when they happen.”
AC: Part of what defines your work is a particular cadence. In your earlier films, you were working a lot with people you already know, and who know you. But when you're working with more established performers, how do you explain to them what it is you're looking for?

JH: There's a few factors. I suppose I generally don't like actors trying to be funny, unless it feels like it's the character trying to be funny, and then that makes sense within the scene. I always prefer they were saying something apparently seriously, or some sense of self-importance or self-righteousness. I don't like things to happen that quickly. I quite like to take the emphasis and the drama away a little bit. It just feels a bit more tragic when things happen in a more realistic, ponderous pace – a bit like they would in a documentary. Life doesn't unfold in this frenetic pace. Things just happen when they happen.

I know that people have said to me, oh, your actors are really deadpan, and I don't think that's true at all. They get really worked up, or really upset – maybe not all the time, but definitely some of the time. You can watch a filmmaker like Hal Hartley or you can watch Yorgos Lanthimos, and there's a real stylistic manner of speaking, but I think a lot of it is to do with the editing. When you see excruciating silences in real life, and when you see people sitting down and they don't really know each other and it goes dead, and after 15 seconds finally someone thinks of something really banal to say or to ask, and finally the conversation picks up. You can think of a filmmaker like early Mike Leigh, but I don't think it's really done that much in film or TV. I don't even think I do it that much, really, but it's so funny when you see things go dead.