Ben Dickey on Being Blaze

Inspiration, fear, and the guiding hand of Vincent D'Onofrio 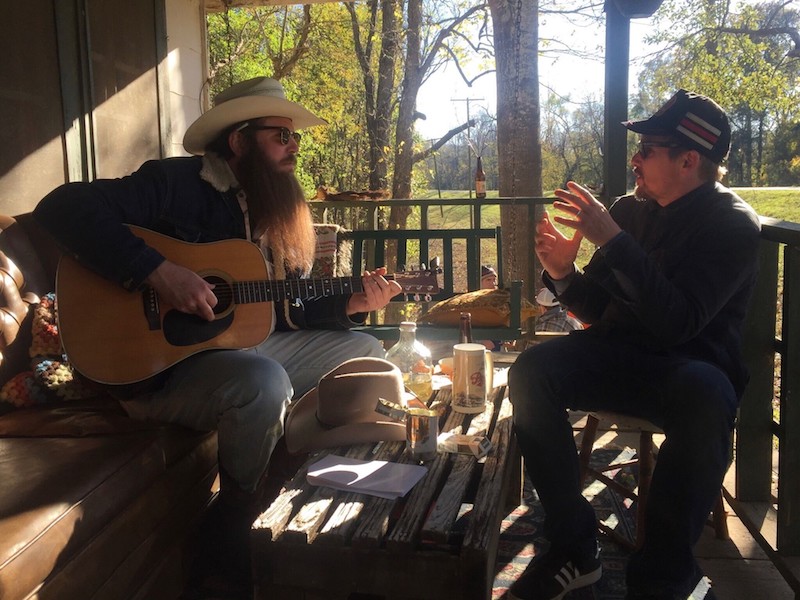 "I remember, I said to Ethan, I don't know what acting is. I know it's not reading lines – I know that's part of it, but I don't know what it is." Musician Ben Dickey (left) takes on a major acting challenge with Ethan Hawke in Blaze, the bio-pic of doomed Austin musician Blaze Foley

Blaze Foley had all the makings of a musical legend – charisma, talent, a remarkable songwriting gift – but he was never exactly a household name when he was alive. "He made sure of that," Ben Dickey said, nodding.

The two men had so much in common, it's no surprise that Ethan Hawke cast Dickey as Austin's legendary Duct Tape Messiah in biopic Blaze. Both cut imposing figures: Big, burly, bearded folk singer-songwriters out of Arkansas with influential friends who understood their hidden talents – Hawke for Dickey, and in Foley's case, his fellow musicians like Townes Van Zandt. But look at photos of Foley, and there's a hardness, a mean streak behind those pastel blue eyes, that you won't find in Dickey's face. A genial, soft-spoken bear of a man, unlike Foley's hawklike gaze – but maybe that's the core to how, in his first ever acting role, he crafted a compassionate depiction of the often self-destructive and selfish Foley.

Austin Chronicle: You and Ethan originally talked about Blaze as just a supporting character in a show about musicians. How did you respond when Ethan told you, we're doing a whole movie about him, and you'll be in just about every scene?

Ben Dickey: When I was a kid, I have a hand fetish, and I always hold a guitar pick. My friend's parent, his dad, said, 'Oh, you've got a little security blanket there.' Oh, is that what that is? So what I knew I could do was do his music right. I was jump-off-a-bridge-with-a-bungee nervous about doing the movie. Ethan's a master at what he does. I've seen him direct, I've seen him on stage, I've seen him prepare for roles. He's a space cadet in a lot of ways, he's a flower child in a lot of ways. "Oh, I've lost my glasses!" What, again? But both of us like to get deep, quick, and when he gets focused, man, when he asked me to do it, that convinced me I could do it. And when he sent me to Vincent D'Onofrio to get these acting workshops, it made me think, well, he doesn't want to waste Vincent's time, and Vincent gave me these impenetrable tools that, without them, I wouldn't have been able to do this at all.

I remember, I said to Ethan, I don't know what acting is. I know it's not reading lines – I know that's part of it, but I don't know what it is. So he sent me over to visit with Vincent, and we had a couple of visits with some friends of his that are acting, and have been in the business a really long time, and that was my question to all of them – what is it? And Vincent was pretty much, 'It's breathing. Don't rehearse things and go, I'm going to pause right here, any of that clever shit.' That's helpful, because constructing a scene and getting what it was, you really just get the words moving. Get the words, get the words, get the words. I play so many shows where I play covers, I know how to cram like that but I didn't know when I started, am I going to be nervous of the camera? Vincent simplified all of that, and gave me those tools that, it's none of those things. And when it becomes those things, it's acting, and you don't want that.

So when there's a hundred crew members, and the AD has a schedule, and you see how much work has gone into it, you really want to participate well. You want to hold up your end of the bargain. I played basketball and I ran kitchens – I was a chef for a long time – I've had leaders that I've worked under, and as a leader I've had people that worked under me. And I don't want to let down the coach, and as a boss, I don't want fail. I want to create a space where everyone succeeds. 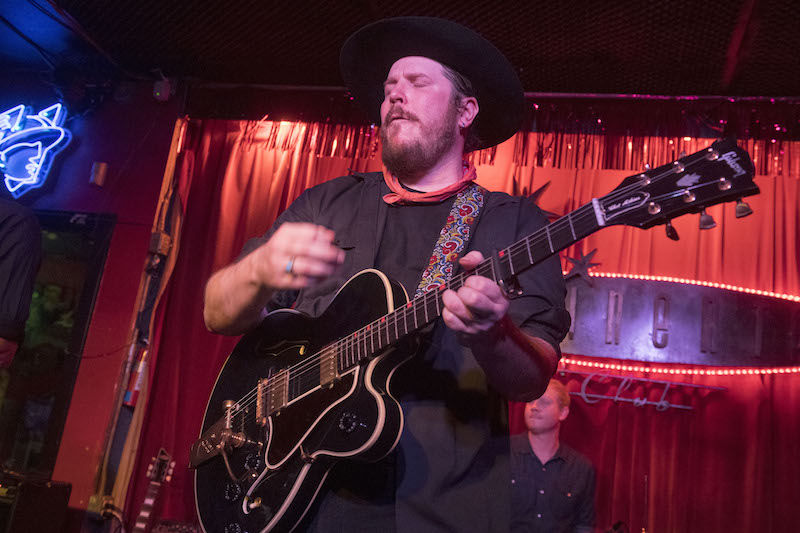 Ben Dickey at the Continental Club (Photo by John Anderson)

AC: One of the fascinating parts of Blaze is how you never get that music movie glamour shot, where all the troubles fall away and it becomes this beautifully shot Busby Berkeley routine. The closest your Blaze gets is getting into a fight with hecklers.

BD: Charlie [Sexton] as Townes [Van Zandt], he has this line which is something that Townes really, said – "You have to piss everything off." We never glamorize it, because it's hard. And it is hard. I was never homeless proper, but I lived in New York for a while, and I didn't have a place to be.

Blaze never really had that moment. He'd get close, and he'd blow it up. He'd torpedo his own fleet again and again and again. But what we did want to show was that the songs were really good. They were powerful, and he was someone that needed some help. He was convinced that if he was without an oar, and without a shelter, the songs would be pure and rich and true.

Blaze hated a phony, he really did. I heard some stories, and he could be righteously mean. He pissed in a guy's drink while he was performing. I don't know who it was, some slick fella from Nashville who probably had been taking serious guitar lessons and going, "I'm going to be the next Porter Wagoner." He watched him perform, and when the dude turned around to get another guitar, he pissed in the guy's drink and he drank it. That's fucked up, man, rough.

So you don't get that, and he never had it, but you get the moments when he's conceiving of the songs. I'm a songwriter, and they come mysteriously. Sometimes I'll be having a serious conversation, and I've got to leave, because it just starts. So you get to see him grab songs out of the stars, and that's something that all the musicians who see this who a songwriters, especially the ones who write damn good songs but aren't trying to be in the business – and I know folks who write damn good songs, but they aren't trying to tour and shit.

AC: Steve Earle famously talked about Austin as a place where it's too easy to be a musician and not get anything done.

BD: Exactly. Fats Domino, Allen Toussaint, Bobby Charles, a bunch of these Louisiana musicians. Fats' thing was, I make records, I might tour a couple of times, but you come see me at Tipitina's. There are people who are imploring them, "You should move to Nashville or LA," and Toussaint certainly tells the story, "Oh, they're trying to trick me into moving to Los Angeles. Where am I going to get gumbo there?"

“I’ve lost friends to drugs, suicide – artists, you know? – and they had partners, and they had people who were along for the ride, and they were devastated tenfold over people who just lost a friend or a lover, because they’re, aw, man, I was with you. I was in the canoe and I flipped it back over every time you flipped it. What an unforgiving gig, man.”
It's the same here. I think with Townes, his songwriting was so strong that many people wanted to manage him, particularly after "Pancho and Lefty" happened, he could have really tried to do it. I don't think he could. I think he was disturbed in a serious way. "That's what phonies do, I'm not going to do it" – for better or for worse. And Blaze was even more so

I was talking to Gurf [Morlix], who was a good friend of his, and after all of the stuff learning about him, you can kind of mark the big torpedo that hit him was when crystal – crystal meth – hit. Because he was an alcoholic and he was in a lot of pain. And if you're a drinker, what's better than something that can help you drink more? And if you're homeless, the worst part of the day is going to sleep, because that's when the loneliness is loudest because you're under a bridge or wherever. But if you just wander, you're never really alone. So you can mark, for Blaze at least, when those guys started taking crystal, or trucker speed – or biker speed as it's called round here.

So somebody asked me, what the biggest message of this is, and for me it's, if you see somebody in freefall, well, some people you can't reach. Blaze would have probably burnt himself out anyway.

AC: That's something important here, that this isn't about mythologizing those self-destructive instincts. That some people, when they're falling, you can catch, and some people, get out of the way, because when they land they will crush you.

BD: They don't wanna be caught. Alia [Shawkat] as Sybil [Rosen, Foley's wife], God, she make so many sacrifices, and he is just bluntly, 'Let's move to Chicago.' Hell, man, it was complicated as hell for us to move here, and now you want to go there?

Every artist I've known that can stay with a partner for a long time, most of the time that partner has to have an artistic vision or an entrepreneurial vision too. It's no fun to be the person that's 'Anything for you, anything you need.' Especially when it's an artist that is not following through, or doing what Blaze is doing. "The door is open." "Fuck the door."

I'm so proud of Ali as Sybil in the movie, and I was telling this to Sybil for real, when she tells him 'I can't be your muse anymore, because I'm alive too.' It's a hard scene, but I feel pride for Ali and pride for Sybil, because she was able to graduate from that shitty apartment to a better apartment, and she loved Blaze but she let him go. Good job, because it was only going to get harder.

I've lost friends to drugs, suicide – artists, you know? – and they had partners, and they had people who were along for the ride, and they were devastated ten fold over people who just lost a friend or a lover, because they're, aw, man, I was with you. I was in the canoe and I flipped it back over every time you flipped it. What an unforgiving gig, man.

Blaze is in cinemas now. For review and showtimes, see our listings page.

For more on how Ben Dickey and Ethan Hawke developed Blaze, read "4am With a Head Full of Whiskey," Aug. 17.