The Baker Brothers Find Their Kin

Behind the story of the gritty SF drama (plus, Mogwai!) 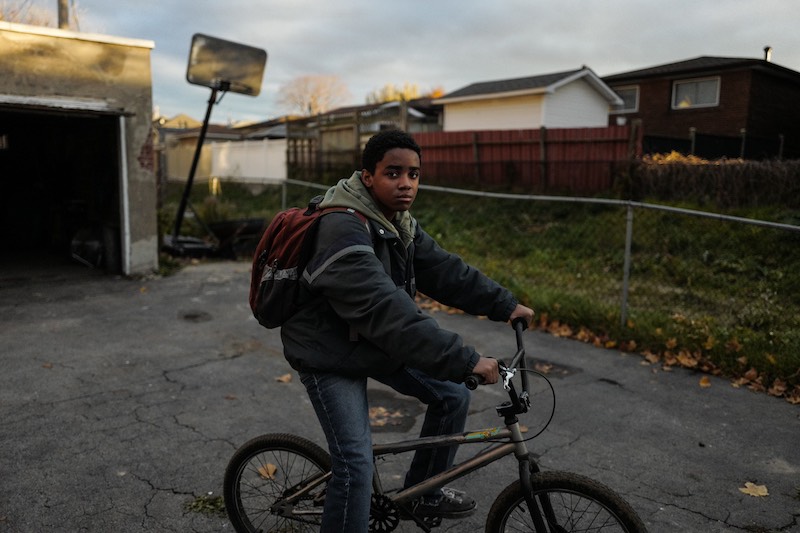 In 2015, Josh and Jonathan Baker showed a 12 minute shot at SXSW called "Bag Man," a visceral sci-fi drama about a boy who finds an alien rifle, and is faced with weighty decisions about what to do, and what his decisions say about him.

Even though the Australian siblings set that short in their adopted home of New York, that made it a sort of homecoming earlier this month when they brought the feature-length adaptation, Kin, back to Austin for a special preview screening before its national release this weekend. The full length version moved the action to Detroit, where young Eli (Miles Truitt) finds himself divided between his adopted father Hal (Dennis Quaid) and brother Jimmy (Jack Reynor). But those family dramas explode when the family runs afoul of a local gangster (James Franco) – oh, yeah, and that ray gun.

Jonathan Baker: We set ("Bag Man") in New York out of necessity, because we lived there, and it was cheaper, and we had relationships with crew in the city -

AC And then you didn't have to pay them.

Jonathan B.: Honestly, with many of them, we didn't. It was a passion project at its heart, but when we got the opportunity to write with Dan here a feature script, we talked about themes of decay, in character, in location, and there wasn't a better place in our mind than Detroit. We didn't want to sell it out for its stereotypes, but we just loved the city and the way it looks, and the combination of crumbled and thriving.

Josh Baker: We knew early on this film was going to have a certain level of grit to it. For the tone, a lot of our references were gritty crime movies, so I guess we were after a city that encapsulated that, and Detroit has it. It wasn't until we met Dan that we were pitching him a movie about Detroit, and he was looking at us with a cocked eye, going, 'You guys know I'm from Detroit, right?' Ah, nobody told us that.

Daniel Casey: To tell you the truth, it was nice to talk to these guys from the perspective that they didn't know I was from there originally. We talked about the city, and the way that they saw it, their approach to the film, and I was able to go, well there's this neighborhood called Hamtramck, and there's this Polish-American Catholic community there. It's very integrated - there's African-American, there's Muslim.

Jonathan B.: It's also very blue collar, hard working. I remember the day that you brought up that Dennis Quaid and Jack [Reynor] would be playing a Polish family, and I went, 'Interesting.' We hadn't thought about that angle, and it brought up an authenticity that we really liked.

“He’s an angry kid, he‘s maybe gone through some trauma in his life, his dad is not around. He feels like he has some innocence around him, but there‘s some real darkness.”
AC: One of the most important beats is that Eli is scrapping, stealing metal out of abandoned buildings, which is a real thing.

Josh B.: That was a detail very early on, that we knew we wanted him to have a side-hustle, and be part of this community of scrapping.

Jonathan B.: And have a street-smart quality to him. Even though he's a super-quiet, introverted kid with not a lot of friends, he's got his own thing that he really focuses on in his spare time. Riding around on a BMX through Detroit really reflected our childhood in many ways. The first 10 minutes, there's very little dialog, and we really wanted you to feel like you're exploring a location with the lead character, and we throw you in with him. That's very much we used to get around, back in the Eighties, on our BMXs, exploring neighborhoods.

AC: Detroit's become a go-to place for a lot of filmmakers who captured the post-crash decline, but now it's coming back, and that feeds into the story. Hal's working construction because there are construction jobs again.

Jonathan B.: We talked a lot about that. We've also set it up that Eli is in the middle, and he has two influences in his life. One is a builder, and one is a destroyer, and so it was very specific that Dan wanted to make him a guy in construction. So you've got one side of his life that's a bad influence, and on that represent good, and it's about Eli trying to figure out what man he wants to be.

AC: There's a big difference between this and "Bag Man," because you get to the end of the short and go, 'This may not be a kid you want to give a fusion cannon to.'

Josh B.: There's a darkness to the character in "Bag Man." He's an angry kid, he's maybe gone through some trauma in his life, his dad is not around. He feels like he has some innocence around him, but there's some real darkness. And if we go to Kin, Hal's greatest fear is Eli turning out like Jimmy.

AC: It feels like you really swung for the fences in the casting.

Jonathan B.: In one way we did, but in other ways we tried to pull back and keep it restrained. I feel like swinging for the fences 100% ends up with Transformers.

AC: But your version of swinging for the fences is keeping it as a small, family drama at its heart, with a crime component, that still works without the sci-fi aspects. And with the cast, was there a point where you went,, nah, there's no way we have Dennis Quaid.

Jonathan B: There were many points over the last three years where we went, I can't believe it's going down this way.

AC: And about that score. I think you prove that more fillmmakers should use post-rock, because it's such a refreshing change from the standard orchestral fare, and really adds to the tone. So, how did you get Mogwai?

Jonathan B.: We had a playlist that was very long, that was about 13 hours, and it was for the short. So we extended it when we were writing the feature, and it turned out there was a lot of Mogwai on that list. At some point in 2015, we looked at each other and went, 'Do we just ask Mogwai?' We were talking to our agents about it, and they were saying, we represent these bands, Sigur Ros, and Mogwai, and we went, 'Mogwai's number one.'

Josh B.: It felt silly to say, but we were just like, 'Can we just ask Mogwai?' and they went, yeah, OK. So they sent them Dan's script, and suddenly we're on a phone call with Stuart [Braithwaite], the lead guitarist, and he's like, yeah, we're really into this. We emotionally connected with the words, and wed love to do this. It was one of those moments.

Jonathan B.: It's funny, though. The whole way along, producers get very nervous about a band doing a score for a big international release, because they're a band, and they don't have a producer telling them schedules, and they're touring at the time. So we had these demos that were in the movie right up until the last few months, and they're not hitting on the levels of emotion and polish and finesse that they're going to get to.

Josh B.: So there's a lot of nervousness, even from our side, of 'when's the music going to be finished?' I've never done tis before, Mogwai's never done a feature before, and we're all just playing with music. We went in to Glasgow, to the studio with Mogwai, and we were told, juts trust us, when we get into the studio, it will all come together. It was a real trust faith thing, and so when we went in there, and sat with the guys, they came up with a score that had that polish, and had that emotion, and now it's in the movie.

Kin is in theaters this week. For review and showtimes, see our Listings Page.

The Kin soundtrack album by Mogwai is available in CD and vinyl from Temporary Residence.