Aneesh Chaganty and Sev Ohanian talk about their online thriller 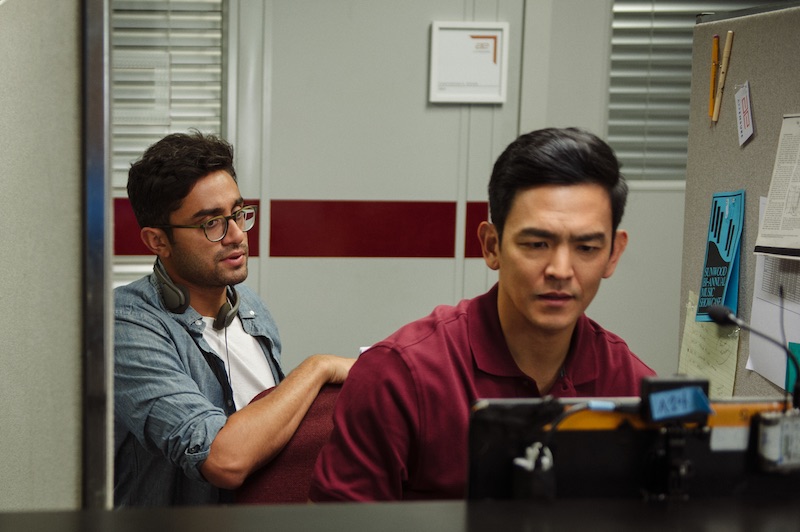 What do you call a film that's set completely on a computer screen. In the case of missing persons mystery Searching, writer/producer Sev Ohanian said, "We have a name, which is it's a thriller."

More seriously the in-house term at Bazelevs – the studio that has made this kind of picture-in-picture narrative their bread-and-butter – the term is screen reality. "Just like VR, AR, this is SR," said Ohanian, who added, "When we were early working on this movie, I called it a UI movie."

According to Ohanian and his co-writer Aneesh Chaganty, Bazelevs has only three rules about SR films: They must all be shot in one wideshot; two, it has to be in real time; and three, it must be shot from a single POV. With Searching, that's all thrown out the window. Instead of a single shot, it opens with a montage of an entire life, and then covers several days as panicked father David (John Cho) hunts for clues to the potential whereabouts of his missing daughter Margot (Michelle La) – first from the viewpoint of her laptop screen, but then from a succession of virtual sources, TV broadcasts, surveillance cameras, and more.

Austin Chronicle: Bazelevs had a big success with this format in the Unfriended series, but they're clearly trying to push it into other genres with this and the upcoming political thriller Profile. Did you pitch the idea to them, or did they come to you with the idea of making an SR thriller?

Sev Ohanian: It's very much the latter. Aneesh and I were writing partners – I produce, he directs – we met at USC Film School, and we had made a project together that took place in Google Glass. The whole reason we made it is that Google was asking film schools to make videos to prove that they were a viable filmmaking tool - which they're not. Anyway, the video did really well, we got a lot attention, Aneesh got hired by Google for two years while he directed commercials for them, and Bazelevs reached out to me to find a project to do together on these computers. I thought of Aneesh immediately, and brought him in for a meeting.

Aneesh Chaganty: When I came in, they wanted to follow-up on Unfriended, but instead of following up with a feature film they wanted an anthology of shorts that took place on screen. For me that was a lot more creatively exciting than a feature film, because we'd seen all the ones that had come out before, and to be honest that genre wasn't something we were interested in, nor did we think the potential was very high for it.

“The audience starts to wonder, is this an ex-boyfriend? Is this a stalker? Is this some crazy person? Those options start getting eliminated as we realize that the person who owns the computer is missing, and the person who’s using the computer is the father.”
But a short film, I thought, was pretty interesting. So we left, and about a month and a half later Sev and I ended up texting each other the idea of Searching as an eight minute short. It was something we were very excited about, as we'd found a way for it not to be a gimmick. We'd sent the company a few pages of how it would look and feel, and I found myself back in LA for a Google photo shoot, and the company brought us in, and all of a sudden we were sitting at a meeting table, with all these producers financiers around us. We're like, 'What is going on?' They go, 'We don't want to make the short.' Well, bummer. 'But we do want to make it into a feature. Sev, you can produce it, Aneesh and Sev, we'll pay you guys to write it, and you can direct it. It'll be your first movie, we'll finance it, what do you guys say?'

It was one of those crazy, crazy moments, because in an instant I said no. Sev was kicking me under the table, stabbing me. It was one of those moments that was stupid and awesome in the way I look back at it. The awesome part is that the reason that I said no is that I felt like, in that moment, they had asked us to take a concept that we had found a way to condense into a not-gimmick, and turn it back into a 90 minute gimmick, and make a movie not because our idea had any artistic merit, but because Unfriended was a hit, and that's the last reason that you would want to make a movie.

The stupid part is that I'm a first time filmmaker, and I just got offered money to make a movie, and why am I saying no to it?

All of a sudden, it was like this light bulb going off, as far as the potential of this concept. It wasn't tied to what these other films before us had done. It felt like we could do something new, something emotional, engaging, cinematic, and hopefully in a very short period time, make the audience forget that they're watching a computer screen

AC: So what was the eight minute version you originally wanted for the anthology?

Aneesh C.: It was a lot tighter, but I'll pitch you the opening scene. It starts on a blinking cursor. You don't know anything. Blinking cursor, password typed, shakes. Wrong password. Backspace. Types another password, wrong password, shakes. You can immediately tell that whoever's accessing this computer doesn't own it. The icon belongs to Margot. The person clicks on "Hint," and it's a very personal hint. The person thinks about it, thinks about it, slowly types, and we gain access. The first act of it is discovering who is the user behind the computer, and as the audience starts to wonder, is this an ex-boyfriend? Is this a stalker? Is this some crazy person? Those options start getting eliminated as we realize that the person who owns the computer is missing, and the person who's using the computer is the father, who has broken into his daughter's lap top.

Searching opens in Austin this weekend. For review and screen times, see our cinema listings.