The Lost Art of Being Offensive 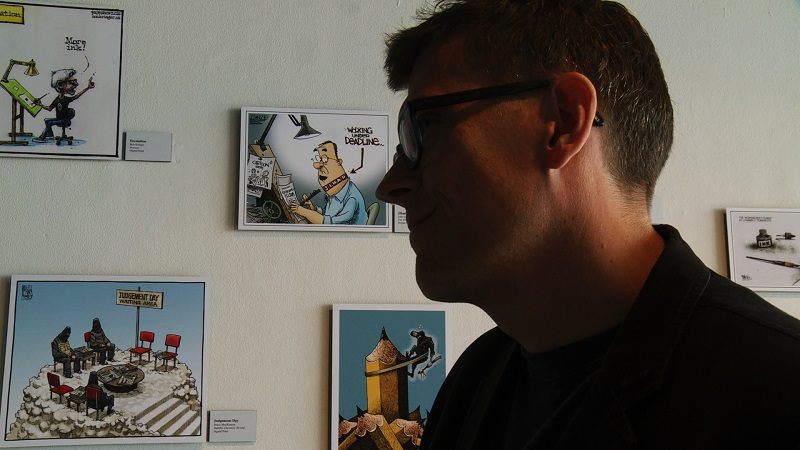 The titular Mr. Fish, one of the last unrelenting and unapologetic editorial cartoonists, in Mr. Fish: Cartooning From the Deep End

A disturbing fact: No daily newspaper in Texas has a staff editorial cartoonist. For Pablo Bryant, that's not just a problem for newspapers, but a reflection of a broader issue. He said, "It's a failure of our culture to celebrate what a precious object satire is, and we're losing it."

That's why the seasoned documentary camera operator made Mr. Fish: Cartooning from the Deep End, a celebration of the brilliant, scathing work of Mr. Fish aka Dwayne Booth. Yet it's also a warning about the seemingly imminent extinction of a vital component of editorial commentary.

That puts it a long way from the standard narrative of a struggling artist managing to break through and become successful. "I don't think I was ever trying to fit the film into a preconceived mold," said Bryant. He spent two years filming Booth and his family, a process that he sort of fell into. One day he had was listening to KPFK, the LA Pacifica radio station, "and I heard this guy talking about how he lived each day in the five stages of grief, but in reverse." That was Mr. Fish, explaining how he woke up with a sense of acceptance about the world, then would try to bargain, then get depressed, and angry, before going to bed with a sense of denial, as the only way to get a decent night's sleep. "It spoke to me," said Bryant. "He created this beautiful, funny, smart analogy for what it's like to try and live each day, and he was an awake, aware person."

Bryant first bought one of Fish's books, then found his Facebook page, and heard he was having a gallery show in L.A. "I went, and told him that night I wanted to make a documentary about him."

In hindsight, he said that was a bold choice, not least since he had no idea whether Fish would actually make a good subject (just because his work was interesting didn't mean he would be), or whether they would mesh. Fortunately for him, not only did Fish say yes, but he let Bryant meet and film his family. Moreover, never once did they ask him not to include a story or a sequence, giving him full access to the troubling task of being a political satirist when satire is an endangered species. That's when the film's theme really came into focus. "At a certain point, my editor [Adam Lichtenstein] and I decided to focus in on the decline of biting satire and the editorial cartoon in general and how that world has collapsed, and how that affected him personally."

Even in the realm of provocateurs like editorial cartoonists, Fish's work stands out, both in its audacity and its virtuosity. "He's a real prodigy," said Bryant, "and one of the things that differentiates him from other cartoonists is that he never branded himself. A lot of the advice that he got when he started out was 'pick a style,' and the whole idea of branding himself was sickening to him."

“It’s OK if I’m wrong, and it’s OK if I have a different opinion to you, and it’s wonderful that we can have those kinds of difficult conversations. We need to be OK to say, ‘It’s OK to be wrong,’ or ‘fuck off, you’re wrong.’”
Think about it: An artist like the late John Callahan, or the Washington Post's Ted Rall, or Chronicle regulars Jen Sorensen or Tom Tomorrow is automatically recognizable. Fish will flip between pop art, fine pen and ink lines, scratchy illustrations - whatever serves the individual cartoon best. "You can say that makes him a very poor businessman," said Bryant, "but I think it makes himself a better cartoonist "

What always distinguishes Fish's work is its unflinching social and political commentary. Compare his output with the work of many of his peers, Bryant said, "and a lot of it is very mediocre. If you look at Fish's stuff, there aren't a lot of people in that world who have that kind of bite and balls and teeth. ... There are people doing good work, but there are very few people out there, and that's an indication of where the culture is. That stuff doesn't fit into a business model."

Bryant paints the death of the fearless editorial cartoon as a massive cultural loss, and symptomatic of a deeper problem. The best of those cartoonists represent "having a real freedom of thought to pursue your creativity unencumbered by how the popular culture was going to take it. [Fish] is the last holder of that flame, but the world around him doesn't seem interested." Bryant's Fish is, in many ways, a man out of time. "He's fully aware that he was born too late," said the director. "He really wanted to be part of the 60s and 70s radical culture, where there was a blossoming of those kind of voices in our culture."

That's the real worrying message about Mr. Fish: not that one artist has never got the recognition many people think he deserves, but that there is no cultural space for any kind of dissidence. "We've become so precious with our opinions and our points of view," said Bryant. "It's OK if I'm wrong, and it's OK if I have a different opinion to you, and it's wonderful that we can have those kinds of difficult conversations. We need to be OK to say, 'it's OK to be wrong,' or 'fuck off, you're wrong.'"

Mr. Fish: Cartooning From the Deep Eend opens in Austin this weekend. For showtimes and review, see our listings page.

Pablo Bryant will be in attendance for a Q&A at the Alamo South Lamar 7pm screening on Aug. 31.

There will also be an exhibition of Fish's work in the lobby until Sept. 2.