The Night He Came to Fantastic Fest 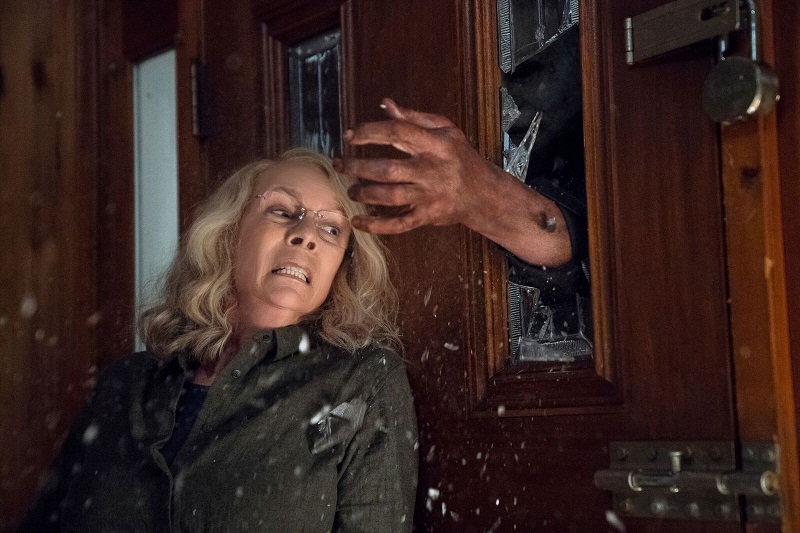 The nightmare ends: Halloween joins the roster for Fantastic Fest 2018.

Halloween is coming early to Austin this year – or rather, Halloween is. Fantastic Fest has announced that the revamp of the classic horror franchise, directed by erstwhile Austinite David Gordon Green, will be this year's opening night film, with star Jamie Lee Curtis in attendance.

Heading up this second round of announcements (find the first titles here), the John Carpenter-sanctioned reinvention will have its world premiere at the Toronto International Film Festival, but it seems kind of natural that Green (after his Austin-based trilogy of Prince Avalanche, Joe, and Manglehorn) would make this the site for the U.S. debut.

However, he's not the only big name director to bring their latest project to Austin, as professional modern shockmaster Gaspar Noé will unleash his confrontational (natch) Climax.

As for some deeper cuts, there are some FF and Drafthouse faves, including the incomparable poet of modern cinema Peter Strickland with his latest, In Fabric; Green Room/Blue Ruin suspense master Jeremy Saulnier and his frozen psychological horror Hold the Dark; and gonzo filmmaker par excellence Jason Trost returning with the sequel to his brain-smashing dance sim postapocalyptic gang war classic The FP, FP2: Beats of Rage.

Fantastic Fest 2018 runs Sept. 20-27. Info and tickets at www.fantasticfest.com. We'll have more on Fantastic Fest right through the festival at www.austinchronicle.com/fantastic-fest, so check back for more news, reviews, and interviews. Now, here's that second list in full:

D: Luis Ortega
Argentina, Spain, 2018, U.S. Premiere, 120 min.
In 1971 Argentina, Carlitos is a baby-faced youth whose good looks match his confident swagger. Carlitos’ passion is stealing; the things he covets, he takes. But when he meets Ramon at his school, he embarks on his true calling: armed robberies and violent crimes.

D: Ana Murugarren
Spain, 2017, Texas Premiere, 103 min.
In Attendance – Director Ana Murugarren and producer Joaquin Trincado
In Ana Murugarren’s whimsical The Bastards' Fig Tree, a fascist soldier in the Spanish Civil War becomes a fig tree-obsessed hermit after looking into the vengeful eyes of a young boy whose father and brother he had violently executed.

D: Henry Jacobson
USA, 2018, World Premiere, 95 min.
In Attendance – Director Henry Jacobson, actor Seann William Scott, producer Adam Hendricks, and writer Avra Fox-Lerne
Evan (Seann William Scott) values family above all else, and anyone who gets between him, his wife, and newborn son learns that the hard way. But when it comes to violent tendencies, it seems the apple doesn’t fall far from the tree.

D: Winston Azzopardi
Malta, United Kingdom, 2018, World Premiere, 89 min.
In Attendance – Director/co-writer Winston Azzopardi and actor/co-writer Joe Azzopardi
A lone fisherman on his daily run finds himself lost in a thick fog which proves impossible to navigate. The worst is yet to come when his encounter with a seemingly abandoned sailboat becomes a fight for survival against an enemy unknown.

D: Ali Abbasi
Sweden, Denmark, 2018, Texas Premiere, 108 min.
When a border guard with a sixth sense for identifying smugglers encounters the first person she cannot prove is guilty, she is forced to confront terrifying revelations about herself and humankind. D: Aaron Schimberg
USA, 2018, Regional Premiere, 91 min.
In Attendance – Director Aaron Schimberg and producer Vanessa McDonnell
Mabel (Jess Weixler, Teeth) and Rosenthal (Adam Pearson, Under the Skin) – both hired for their looks – meet on the set of a horror movie in this surreal examination of how those with physical differences are portrayed on film.

D: René Manzor
France, 1990, North American Premiere, 90 min.
In Attendance – René Manzor
Deadly Games (3615 Code Pere Noel) is the terror version of Home Alone. A 9-year-old kid in his house, tormented by a demented Santa Claus, fights for his survival by setting traps. Christmas will never be the same again.

D: Matteo Garrone
Italy, France, 2018, Texas Premiere, 102 min.
Marcello is a gentle dog groomer whose tumultuous friendship with violent neighborhood thug Simone engulfs him in a violent series of events that will leave him forever scarred.

D: Tim Sutton
USA, 2018, U.S. Premiere, 101 min.
In Attendance – Tim Sutton
Frank Grillo and Jamie Bell are just two of the desperate men and women headed for “the Donnybrook” – a no-holds-barred, bare-knuckle fight contest with a $100,000 prize – in this Midwestern Gothic journey into a heartland of darkness.

DRUG STORIES! NARCOTIC NIGHTMARES AND HALLUCINOGENIC HELLRIDES, FEATURING THE TRIP BACK – PRESENTED BY AGFA AND SOMETHING WEIRD

USA, 2018, World Premiere, 80 min.
In Attendance – Something Weird Video’s Lisa Petrucci
AGFA and Something Weird present a compilation of classroom scare films about boozers, users, and losers, all in brand new 2K preservations and featuring the legendary anti-drug diatribe known as The Trip Back.

D: Andrés Kaiser
Mexico, 2018, World Premiere, 97 min.
In Attendance – Andrés Kaiser
The mountains of Oaxaca harbor the remains of a ravaged and burnt shelter, once home to a psychoanalyst priest who used it to look after savage children, trying to reintegrate them into society. Through videotape diaries and interviews, the truth of what happened is shockingly revealed.

D: Jason Trost
USA, 2018, World Premiere, 89 min.
In Attendance – Jason Trost
JTRO gave Frazier Park everything he had, but his challenges aren’t over. Now he must journey into the destruction of the Waste to rekindle the passion he needs to win the ultimate Beat-Beat Revelation tournament and fulfill his destiny.

D: Olivier Afonso
France, Belgium, Luxembourg, Spain, 2018, World Premiere, 77 min.
After winning a competition, a women’s volleyball team heads home aboard their minibus. Forced to take a shortcut, they end up at a tavern where they upset the local degenerate rednecks … and then the hunt begins.

D: David Gordon Green
USA, 2018, U.S. Premiere, 105 min.
In Attendance – Jamie Lee Curtis and producers Malek Akkad, Jason Blum, and Bill Block
Jamie Lee Curtis returns to her iconic role as Laurie Strode, who comes to her final confrontation with Michael Myers, the masked figure who has haunted her since she narrowly escaped his killing spree on Halloween night four decades ago. D: Simon Jaquemet
Switzerland, Germany, 2018, U.S. Premiere, 113 min.
In this dark and fantastical tale about religion vs. science and good vs. evil, a woman’s faith is being tested as her ex-lover reappears in her life after 20 years in jail.

MAY THE DEVIL TAKE YOU

D: Timo Tjahjanto
Indonesia, 2018, North American Premiere, 110 min.
At her father’s deathbed, Alfie learns that she and her family must give the devil his due when he comes to collect on the pact made years before in this electrifying horror film from Indonesian master storyteller Timo Tjahjanto. D: Vincent Mariette
France, 2018, World Premiere, 83 min.
In Attendance – Director Mincent Mariette
Summer is in full swing and men are going missing. People are talking about a leopard on the loose in the area. A mysterious horror writer is in the bungalow next door. And Laura’s most disturbing summer has only just begun.

THE STANDOFF AT SPARROW CREEK

D: Henry Dunham
USA, 2018, U.S. Premiere, 88 min.
Over the course of one grueling night, a militia tears itself apart as it searches for the perpetrator of a mass shooting among its own.

D: A.T. White
United Kingdom, USA﻿, 2018, World Premiere, 99 min.
A girl. A mixtape. And Armageddon. A uniquely honest portrayal of loss as a young woman struggles with the death of her best friend while dealing with the horrific Lovecraftian end of the world, driven by a beautiful indie music soundtrack.

D: Brian Damude
Canada, 1975, World Premiere of New Restoration, 91 min.
When a well-intentioned bystander rushes to the scene of a violent car wreck, he finds himself embroiled in a hot mess of desperate homicide in this wickedly taut and unpredictable thriller, recently rescued from Canadian obscurity and restored by exploitation video label Vinegar Syndrome.

D: Rahi Anil Barve & Adesh Prasad
India, 2018, U.S. Premiere, 108 min.
In Attendance – Co-director/writer Adesh Prasad
In the rural village of Tumbbad, a decaying castle hides an immeasurable ancestral fortune guarded by something ancient, sinister, and monstrous. Vinayak thinks he can control it, but how long will it be until his own greed destroys everything he’s built?