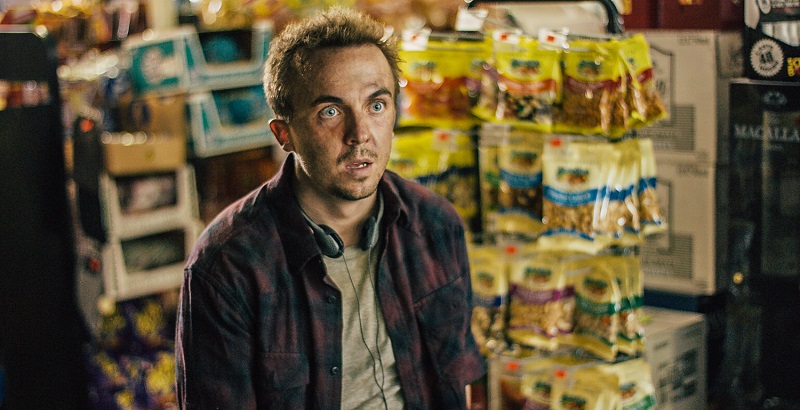 Frankie Muniz in The Black String, one of the world premieres announced for Austin Film Festival 2018

Austin Film Festival has always emphasized itself as putting the spotlight on the scriptwriter, but there's more than a few recognizable actors and directors in the first wave of films announced this morning.

She's far from the only recognizable name on the roster, with the world premiere of Frankie Muniz's new psychodrama The Black String, and Tessa Thompson (Thor: Ragnarrok, Sorry to Bother You) in neo-Western Little Woods.

Those films share the stage with the latest from actor/director Joel Edgerton, his adaptation of Garrard Conley’s gay conversion therapy memoir Boy Erased (expect that to make an interesting thematic pairing with Speaking in Tongues, Nathan Deming's story of a young man willingly deep in the world of evangelicalism).

Of course, there's a strong local component, with current and former Austinites like Bradley Beesley ("Calls to Okies," Okie Noodling, Sweethearts of the Prison Rodeo) and Hannah Fidell (6 Years, A Teacher) bringing their latest projects to the screen. Plus a rising young filmmaker called (checks notes) Robert Rodriguez will be on hand for a very special screening of 1957's Rock All Night, with none other than the king of the z-movies Roger Corman in attendance.

Austin Film Festival runs Oct. 25 to Nov. 1: tickets and info at www.austinfilmfestival.com. Now, here's the rest of that announcement:

D: Joel Edgerton
Starring: Lucas Hedges, Russell Crowe, Nicole Kidman, Joel Edgerton
Jared (Hedges), the son of a Baptist pastor in a small American town, is outed to his parents (Kidman and Crowe) at age 19. Jared is faced with an ultimatum: attend a conversion therapy program – or be permanently exiled and shunned by his family, friends, and faith.

D: Marielle Heller
Writers: Nicole Holofcener, Jeff Whitty
Starring: Melissa McCarthy, Richard E. Grant, Julie Ann Emery
The true story of best-selling celebrity biographer (and friend to cats) Lee Israel (McCarthy) who made her living in the 1970s and 80s profiling the likes of Katherine Hepburn, Tallulah Bankhead, Estee Lauder and journalist Dorothy Kilgallen. When Lee is no longer able to get published because she has fallen out of step with current tastes, she turns her art form to deception, abetted by her loyal friend Jack (Grant).

D: Bradley Beesley
Fathers of Football follows the triumphs and struggles of life in a small Oklahoma town, where high school football is not only the brightest stage, but also the best ticket out. - World Premiere

D: Nia DaCosta
Writer: Nia DaCosta
Starring: Tessa Thompson, Lily James, Lance Reddick
A modern Western that tells the story of two sisters, Ollie and Deb, who are driven to work outside the law to better their lives.

Rock All Night (1957) presented by Roger Corman and Robert Rodriguez

D: Roger Corman
Writer: Charles B. Griffith
Cloud Nine, the local teen hangout, has been taken over by a pair of escaped killers, who hold the local teens hostage. The bartender realizes it's up to him to save the kids.

After one of their shoplifting sessions, Osamu and his son come across a little girl in the freezing cold. At first reluctant to shelter the girl, Osamu’s wife agrees to take care of her after learning of the hardships she faces. Although the family is poor, barely making enough money to survive through petty crime, they seem to live happily together until an unforeseen incident reveals hidden secrets, testing the bonds that unite them