ATX TV Fest: How Roku Is Changing How We Watch TV

Will the streaming box disappear, only to be more ubiquitous? 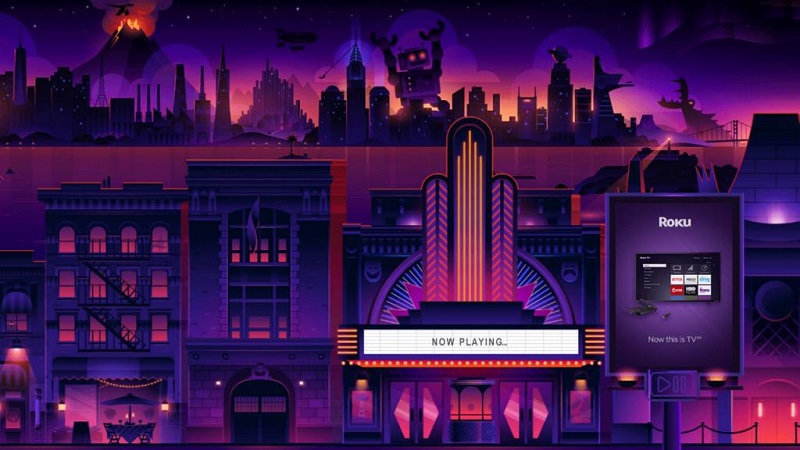 First impressions count for a lot. Maybe that's why Roku has brought back that longstanding mainstay of digital entertainment – the screen saver.

Back in the day, screen savers weren't just a matter of aesthetics. Leave a single image on a monitor for too long, and it would literally burn itself into the screen. The technology has changed, but turn on a Roku box, and there's a side-scrolling graphic, laden with Easter eggs, little nods to the streaming service system's main job as a film platform.

The classic Roku screen saver – dubbed a theme in corporate parlance – was a silhouetted, fictionalized New York skyline, with a few familiar characters – a friendly neighborhood wall crawler here, a giant ape there, an umbrella-toting flying nanny somewhere in the wild blue yonder – but earlier this year it got a massive do-over. Now it's the ultimate cinematic city, with the Space Needle just down the street from Avengers Tower and the offices of the Daily Planet.

At this year's ATX Television Festival, Roku trends expert Abby Reyes described it as a labor of love for their developers. "That was a project that the team worked on for quite some time to celebrate all of the great things that inspired our television and movie-watching experiences."

Roku stood out this year at ATX, and not just because they sponsored the on-site portrait studio. Amid stars like Amy Adams, shows like Take My Wife and Felicity, creatives like Kat Candler, and even studios like Blumhouse, they were the only hardware provider. Yet the familiar Roku black box – somewhere around the size of a can of tuna - has been synonymous with streaming TV since it launched in 2008.

The year prior, Anthony Wood (the tech entrepreneur behind early DVR ReplayTV) was brought in by Netflix to develop their own streaming player system. When Netflix canned that system, instead deciding to encourage other developers to support their service on their own hardware, Wood's Roku was one of the first to market. Its simple interface – that cross control, a few dedicated buttons – plus its plug-and-play durability and stability, and (even though Netflix was an early investor) platform agnosticism, made it immediately accessible and popular. That feeds on Roku's unofficial motto, Reyes said: "TV on your terms. ... A lot of the technology that we build is built on simplicity. We just want to get people to TV faster."

That thinking was why Wood developed the DVR (per Reyes, he wanted to be able to watch Star Trek on his schedule), but now Roku faces a different challenge. Even when it launched, there were only the Big Five TV networks, plus what at the time seemed like a dazzling array of cable channels. However, realistically, most subscribers only had around 50 to 60 to choose from, and it was easy to sort through favorites just by channel hopping. By contrast, Roku currently supports roughly 5,000 channels.

Some of those channels are free; some, like all-horror service Shudder, or the WWE Network, are subscription-only; some, like Hulu, have tiered memberships – the more you pay, the fewer commercials you endure. However, it can be a challenge to work out which out of that vast selection is worth the investment – whether it's of time or money. Moreover, Reyes noted, before streaming, audiences simply watched what was on when they had spare time, or watched the odd episode of a show. Now starting a series becomes an obligation. "A lot of people, when they start watching a show, they're not watching a single episode. They're committing to multiple episodes, so it's a very intentional process."

Of course, Roku is no longer just a box. Roughly a quarter of all TVs on shelves today ship with Roku software aboard, while the software itself is now an app for iOS and Android. However, aside from any hardware costs, the Roku platform has always remained free to use. That's a further essential step away from the legacy of cable, since most of the users of services like theirs are likely to be "cord-cutters or cord-nevers," said Reyes. Part of what drove them away from cable is the seemingly spiraling cost, so services like the Roku Channel are actually ad-supported (meaning that, in an attempt to get away from the cable days, the experience is a little more like regular TV). How. "At the end of the day," Reyes said, "we want you to get the most out of your TV experience."

That's why viewers will obsess over the theme, looking for those Easter eggs, even before they get to the channels. It's even more of a distraction with the new 4K-compatible Roku, which has an aquarium theme. Reyes said, "I have a niece, and she will just stand in front of it for 20 minutes, watching the fish."