Graveside at The Death of Stalin

Armando Iannucci on monsters and accents 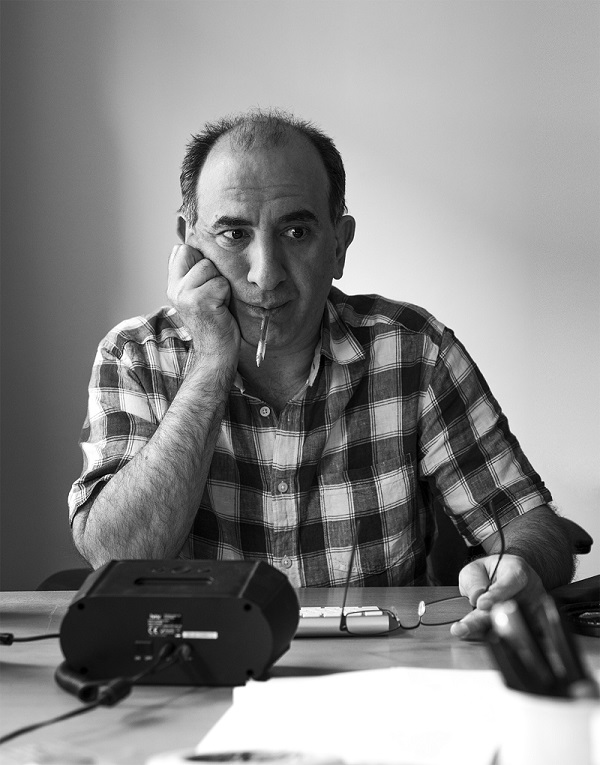 "It does make people realize that, no, no, no, I'm not making this up, this is what happened, it can tell you where things could lead." Armando Iannucci takes a graphic approach to history in The Death of Stalin.

Armando Iannucci pauses for a moment, and asks me about my accent. "Ah, Yorkshire," he says. "Very good. Zhukov."

He's referring to General Georgy Zhukov, one of the key players in the Kremlin intrigues that surrounded the line of succession when Joseph Stalin died in 1953. In Iannucci's latest film, The Death of Stalin, the larger-than-life soldier is given boisterous bluster by Jason Isaacs, speaking not in the standard theatrical English, but in a thick, rolling interpretation of the Northern English county.

As is Iannucci's signature, the film re-creates the madness of power rewritten as baroque, high-stakes office politics. The In the Loop and Veep creator cast a panoply of British and American actors with wildly varying accents, to bring life to the murderous plots enacted by forces from across the Soviet Union when the dictator died.

Yet in its depiction of venal abuses of power, and the slippery self-serving actions of those within range of the throne, Iannucci's narrative (as adapted from the graphic novel by Fabien Nury and Thierry Robin) arrives at a timely moment in global politics, as old orders seem in flux at the whim of "strong men." Iannucci said, "There's a strange resonance that people pick up on. Like [as NKVD chief Lavrentiy Beria] says, 'No, no, no, false narrative,' which is not a million miles away from 'fake news.' It even has the same initials."

Austin Chronicle: So what drew you to the graphic novel?

Armando Iannucci: The graphic novel was drawn to me, in that it was sent to me. I was already thinking about doing a present-day, fictional dictator, just because things were happening around Europe with strong men politicians acquiring power, and extremist movements and parties gaining support.

So I was looking at that area, and quite independently of that a French production company, Quad, sent me this graphic novel, The Death of Stalin, and said, "Look, we're going to make this as a movie, and we think you should direct it. What do you think?"

Normally I say, "No, I only do my own projects, thank you very much," but because of the whole interest in dictators anyway, I thought, well, I'll have a look. The moment I read it, I went, this is the story, this is the film, because it's true. Why do something fictional when this happened, and it's crazy, it's absurd, it's horrific, it's strangely hysterical. It's everything really.

And because it's true, it has more resonance, I think. It has more more of a sense that this could happen again. Don't think that things like this cannot happen, because it has happened. Whereas if I had done a fictional thing, it would have felt a little less pressing.

AC: This is one of those films where the production cycle made it more timely.

AI: We shot it in the summer of 2016, so it was before even there was a candidate Trump, and his bromance with Vladimir Putin, and the presidents of North Korea and China. It was made during one time, but I was doing post and putting it together when circumstances had made it even more crazy.

AC: And being released in the U.S. the same week that China goes over to effectively having a president for life. Everyone knew in the political background that, when he wasn't president, Putin was president, and now he's openly the president, and in Russia the response is, "Well, it's like having a czar again, and that's wonderful, because this whole democracy thing seems very overrated."

AI: And that's because there's a whole generation, several generations now, who've not really known what the alternatives to democracy are because they've never experienced them. So when democracy is seen to fail, they go, "Well, should we try something else?" And you think, no, you really don't want to try something else, you really don't. That's the concerning thing.

But the interesting thing I've been finding, because the film came out in the UK in October, and has been going out in Europe and Eastern Europe – Russia's banned it, I think temporarily – and it's been in Georgia and Ukraine. The response has been, in the West anyway, "Oh, I'm going to research this, because I cannot believe that all of this happened. Oh my God, it did happen." So if it does make people realize that, no, no, no, I'm not making this up, this is what happened, it can tell you where things could lead. 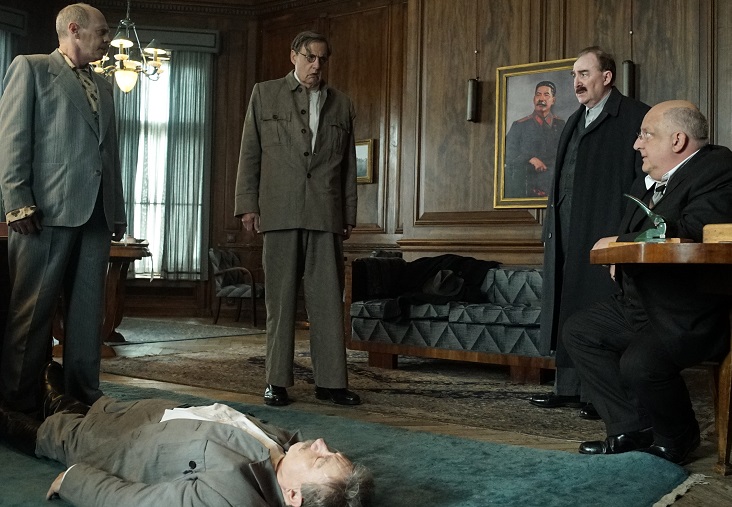 "The first thing the Russian journalists said to us was, 'Thank you for not using fake Russian accents, because we can't stand that.'"

AC: Having sat through Red Sparrow and more terrible Russian accents than I could bear ...

AI: That was the first thing the Russian journalists said to us was, "Thank you for not using fake Russian accents, because we can't stand that." And the reason they can't stand it is because they're always inaccurate. It's a huge country, and it's not just Russia. It was the Soviet Union, so it had Azerbaijan and Georgia. Stalin was from Georgia. Beria was from Georgia. Khrushchev was from Ukraine. So actually it was lots of accent, dialects, and languages being spoken in the Kremlin.

I wanted the immediacy, and it was for a primarily English-speaking audience, so let's just have people speaking in their own voice, and let's have a variety of English. Let's have Scottish, Irish, London, Yorkshire, American, New York. Let's do it that way.

AC: And it's still a pleasant surprise to hear a British accent onscreen that's not London.

AI: Imagine a country the size of Russia, how many accents there must be in that even larger area.

AC: All of which carry their own subtleties.

AI: There's a word in Japanese that, depending on the intonation, can mean "prime minister" or "pair of trousers."

AI: And a diversity of backgrounds, of acting traditions as well. So Simon Russell Beale [Beria] is stage, Paul Whitehouse [Presidium Chairman Anastas Mikoyan] is TV comedy, Steve Buscemi [future Russian premier Nikita Khrushchev] is everything. I just like that, having that different variety of styles, so it didn't feel like it was everyone speaking in the one voice.

AC: So what was the balancing act of going, well, there's someone that I really want, but that would mean two Preston accents, which isn't going to work?

AI: What I would do, I would do them one at a time. You work from Beria outwards. So I asked Simon to be Beria, and he was happy to do it, and I got Steve as Khrushchev, and then start, OK, who would be funny to have in between them, trying to keep the peace. OK, Jeffrey Tambor [Stalin's anointed successor Georgy Malenkov], someone who is almost a number two but should never be in charge. OK, now let's get Michael Palin [Presidium member Vyacheslav Molotov]. Now we've got this sense of style. OK, well, Jason Isaacs. 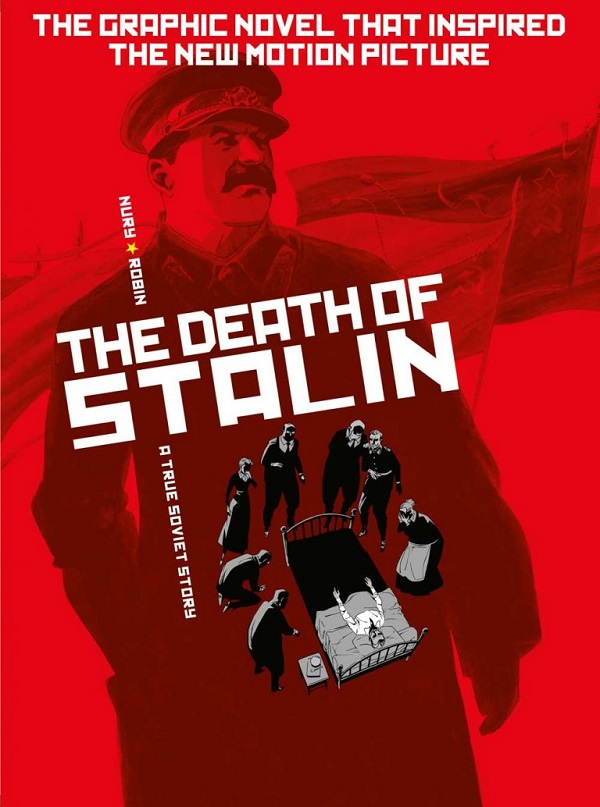 "The graphic novel was drawn to me." Armando Iannucci on the original book version of The Death of Stalin by Fabien Nury and Thierry Robin

AC: You're also balancing humor with the horror of the circumstance. Who were the political farce writers who were in the back of your mind?

AI: I though of films like Brazil, the Terry Gilliam film, which is funny yet it's also quite dystopian. I had a look at The Great Dictator, Charlie Chaplin, which is moments of high slapstick and visual comedy, and yet scenes from the Jewish ghetto. But what appealed to me, because this was true, the way we'll get the comedy and the horror, is if we root everything in events that absolutely happen. Because they will often, of themselves, be both funny and horrifying.

Then I had a rehearsal period, and that's where we set the tone, which is "Play everything straight. Don't do it for laughs, because the comedy will come out of the situation you're in." But the comedy is the comedy of fear and panic. Then I knew that my time in the edit would be getting that fine line, of the comedy and the drama, and the drama helps the comedy, and they both contribute to each other, rather than pulling in different directions.

AC: Were there any stage farces that influenced you? Because obviously [Italian playwright] Dario Fo hangs over Western political satire.

AI: Yes, because Dario Fo had a structure and a script, but he would then cast the local comedian to play a part, and encourage the comedian to embroider that part with their own business. There's an element of that, and it seems more European in that style. So I had kind of not being strictly literal, which goes back to the question of the accents. Not having to be strictly literal. This is a performance, and yes, we'll try and shoot it and make it as accurately and detailedly and authentically as possible, but it's fundamentally a telling of the story. Here is a troupe of players who are going to be telling you this story.

AC: And you weren't adapting the historical events. You were adapting the graphic novel based on the true story. So what was the process of staying true to the history and the book? For example, the final act has some major changes from the book.

AI: That was the biggest thing. The graphic novel jumps three months and there's a series of committee meetings, and I thought, "Well, that works fine linearly for the novel, but it's not the ending to a film." The biggest and earliest decision that I made was to telescope everything underneath the funeral, so we made the funeral the climax of the film. It then gives Khrushchev, because he's in charge of the funeral, something he can use to manipulate certain events against Beria.

But at all times I wanted to stay true to what it was about the graphic novel that made me want to make it into a movie in the first place, which was that delirious opening for the concert, going to Stalin's dacha, and the committee gathering, and the power struggle.

The Death of Stalin is in cinemas now. For review and showtimes, visit our listings page.

Armando Iannucci, The Death of Stalin