Adam Green and Kane Hodder head back to the swamp 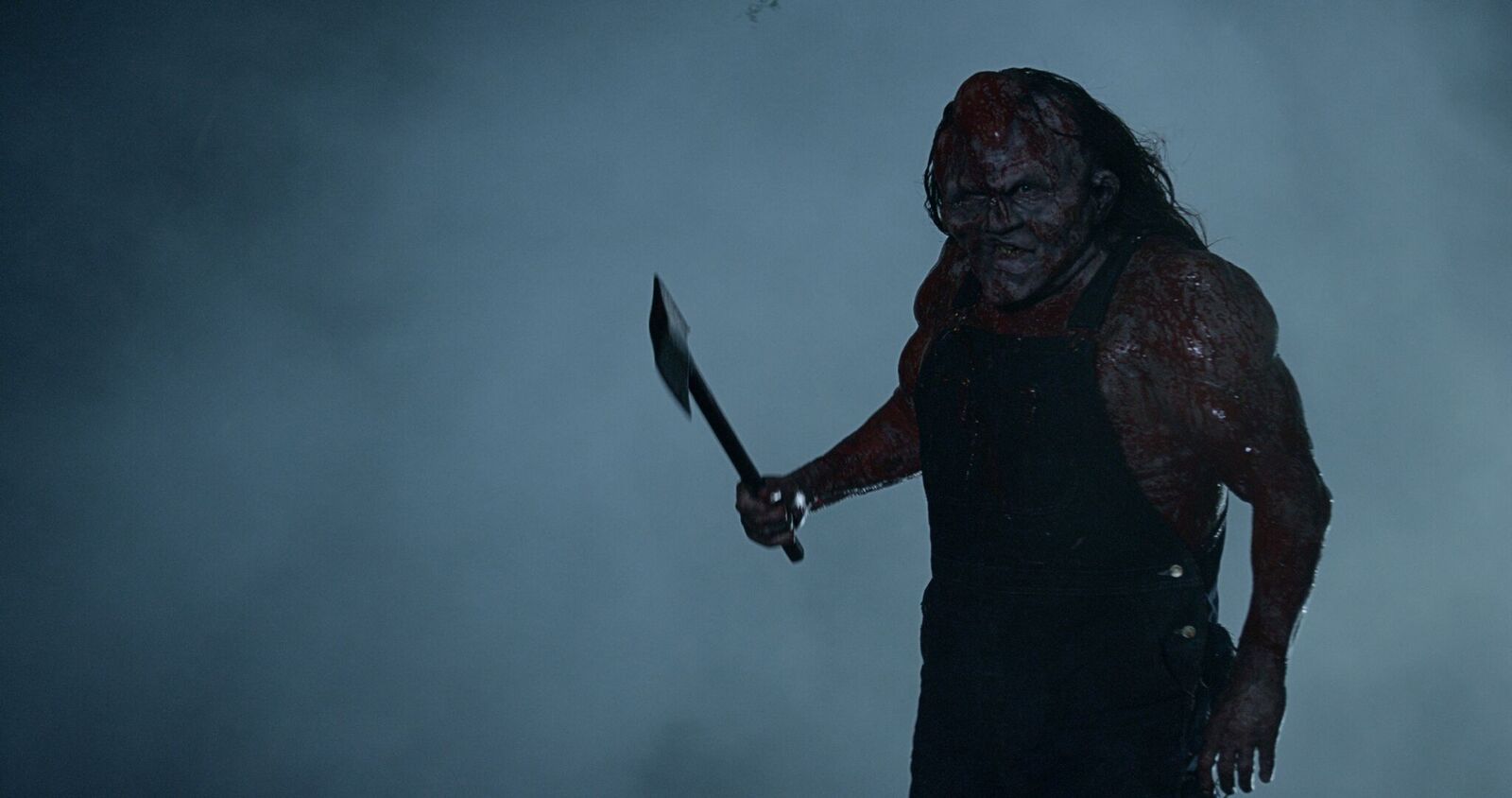 He's baaaaack! Kane Hodder picks up the hatchet again for Victor Crowley, the unexpected return of the slasher behind the Hatchet series.

Victor Crowley was dead, to begin with. There is no doubt whatever about that. Marybeth broke his curse and blasted his head off, and the Hatchet franchise sank into Honey Island Swamp. That is, until writer/director Adam Green decided to bring the modern movie maniac back to his slaying ways.

For many horror fans, Victor Crowley is the last great modern movie horror creation, but Green laid him to rest with the third film. Now he's back in Victor Crowley, and Green is back on the phone, with his famous Yorkshire terrier Arwen, telling new tales of this Louisiana madman.

The first three films are basically one supercut waiting to happen, with the final moment of 2006's Hatchet opening 2010's Hatchet 2, and then Hatchet 2 segueing straight into 2013's Hatchet III. Victor Crowley picks up 10 years later: Paramedic Andrew (Parry Shen) is the only known survivor of the Honey Island Swamp massacre, and even though he knows that Victor Crowley is nothing with which to meddle, he's still prepared to go back into the woods. For the right price.

Speaking of which, didn't Green say that III was the farewell to Victor? And didn't he hand over the reins to BJ McDonnell, cinematographer of parts one and two? What got him back in the director's seat?

(George Romero) asked me at the end of the panel, “When are you going to give these kids another Crowley picture?” I said, “I’m not. He’s dead. It’s over.” And he just laughed.
Two words and a letter. George A. Romero.

In 2015, Green was invited to moderate the Romero panel at the Rock and Shock convention. In the wake of the death of personal hero and horror pioneer Wes Craven, Green was having a crisis of confidence, but the Romero panel was a wake-up call. Green said, "He just didn't want to talk about zombies. He wanted to talk about the craft and the business, and he's referencing my body of work, which was kind of profound."

At the end of the panel, Romero asked him a question: "'When are you going to give these kids another Crowley picture?' I said, 'I'm not. He's dead. It's over,' and he just laughed. ... He made me realize that what I do matters, and people need to laugh, and that's one of the things that I bring to the genre, and it's needed. It was a very flattering conversation, but it really kicked me back into shape. Once I started writing this, I became 100% passionate about it."

Now, convincing the producers was a very different matter. "When I sent them the script," Green said, "it was called Arwen's Fancy Dinner, and they had no idea what it was. Once they read it, and got 10 pages in, they were like, 'What? No no no, we're not going back to that.' Because these are fucking hard movies to make, and I think no one really understands that. When you watch the behind-the-scenes, it always looks like we're having so much fun. Everyone's laughing, and they don't show the parts where everyone's crying or throwing up on themselves, and asking, 'How the fuck are we going to do this?'"

Even with the producers finally aboard, they still needed their Victor, and everyone in horror knows there's only one man behind that latex: Hodder, the slasher's slasher, and the only actor to have portrayed Freddy Krueger, Jason Voorhees, and Leatherface onscreen.

Fortunately, Hodder was eager to get back into axe-swinging action. "I love playing the character," he said, and not just because the film has given him some memorable kills. It's because he created the character, and has been the only person to play the part. "The Jason films, I did four of them. Fine. But there are a bunch of other guys, technically eight other guys, who played the character, so it's not exclusively mine. But Victor is, and hopefully it will remain that way."

Coming back to the bayou also allowed him to continue building the character of Victor. In the first film, as Hodder saw it, the head-bashing, face-grinding, limb-ripping beast was just protecting his home. "I felt that Victor wasn't necessarily used to killing people. We hadn't seen him do it before, so my idea was that he hadn't really done it, and so he was forced by people invading his space to do that. So in the first film, in my mind, I had Victor somewhat jittery." As the films go on, "My approach is him getting more into the groove, and even though it's still just done because it's necessary, there's an element of familiarity."

In this case, familiarity means more gore than ever, and ever more creative kills. Much like Guillermo del Toro, Green's movie mutilations often involve massive facial trauma, and in part that's just what freaks Green out ("To me, anything with teeth, or dental, or the mouth area, it's just seems so painful," he said), but the director also sees that as another character beat for his killer, who grew up with a serious facial deformity. "When we first see him as a child, we see him with a doll which also has a broken face, because that's something he can relate to. Personally, I think that the children that teased him, the people he was afraid of, they had perfect faces, and I would imagine he fantasized about making them look like him." 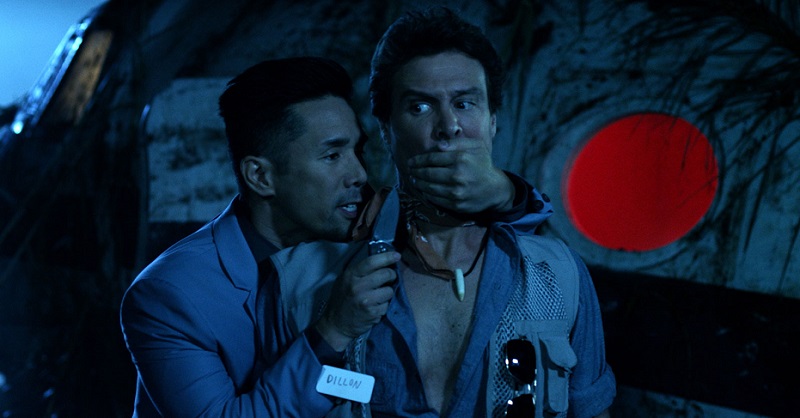 Perry Shen as the hapless survivor Andrew in Victor Crowley

Of course, that only leaves one other recurring actor, and that's Shen as Andrew. That's recurring actor, not character, since Shen played different parts in the first three films, normally suffering a bloody fate. With III, Green said, "I just thought it would be great for Parry to make it out alive, like he's finally learned, just hide – that's how you get away."

When he started on the fourth film, Green was faced with a big question: How did Andrew explain what had happened? "That's one thing you never see in Friday the 13th or Halloween or A Nightmare on Elm Street. Who's going to buy that story afterwards, that it was an unstoppable killer – in this case a ghost – when you have a paramedic who walked away without a scratch on him? Obviously he's going to get blamed, especially when you've got 30 dead police officers and paramedics and SWAT team members. They don't take that shit lying down."

With the cast in place, now Green could focus on the movie itself. But rather than blast news of a new Hatchet film all over the press, he went completely underground. All the current palaver about how Netflix released The Cloverfield Paradox with no real advance word, it's easy to forget that this is the second film Green has made without anyone really knowing what he was doing. With 2015's Digging up the Marrow, he threw eager fans off by claiming he was making a documentary about horror poster artists. When Blair Witch pulled the same trick (hiding the production as The Woods) "People were like, 'Oh, it's a surprise, it was really this,' I went, 'Didn't I do that two years back with Marrow?'

However, Victor Crowley was created under a complete veil of secrecy, with no clues escaping until it had its premiere last fall: Right up until the opening frames, the audience actually thought they were seeing a 10th anniversary retrospective screening of the first movie. "If I could," Green said, "I would do everything that way. There's something very freeing in not having any outside pressure or expectation for anybody to have to answer to. This movie took two years to make, so from the moment I decided to make it, if I had said so, it would have been two years of people impatiently waiting and asking and wanting to know."

That pressure would be high with any film, but much more so if audiences knew that Victor was coming back. Instead, Green said, "I wanted to do it on our terms, and then show people what we did." There was always the risk of leaks ("All it took was one person who has to be the cool guy," he said) "but any time it happened, we were able to snuff it out. I think it made it so much more special for the fans, because it was announced, and then it was on tour immediately. I'm still shocked that it worked."

Victor Crowley (Dark Sky Films) is out now on DVD and Blu-ray. 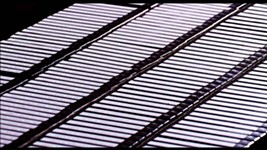