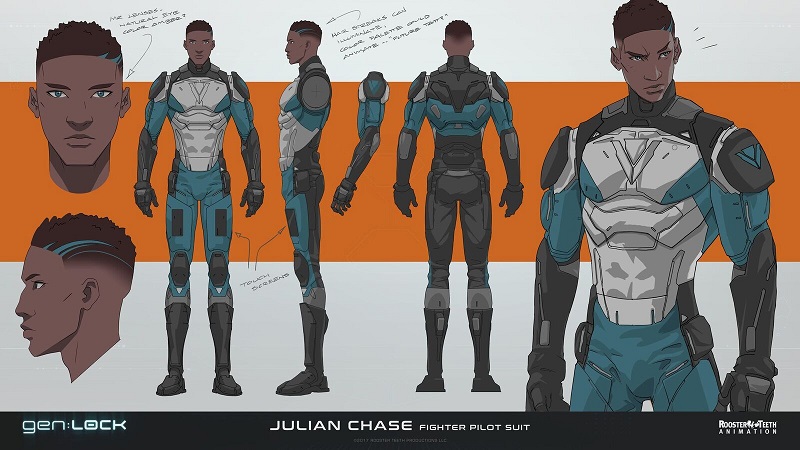 Rooster Teeth gets automated with this design artwork for Julian Chase, one of the characters in their new CG series gen:LOCK (Image courtesy of Rooster Teeth)

Austin's online behemoth Rooster Teeth has been teasing adding a few home-grown animated titles to its powerhouse slate: now the first teaser trailer for the first of those new shows, the mecha-action thriller gen:LOCK.

The studio announced the shows, and let a few images into the wild, last year at RTX, their annual Austin gathering, but now the first teaser for the show has been released. Following on from the success of their anime-influenced smash RWBY, gen:LOCK is being pitched closer to the show that really brought them to the dance, the mega-successful Halo-loving machinima Red vs. Blue.

According to the plot synopsis released with the trailer, "On the losing side of a global war, Earth’s last free society recruits a diverse team of young pilots to control the next-generation of mecha – giant, weaponized robot bodies. These daring recruits will find, however, that their newfound abilities come at no small cost."

gen:Lock season one is scheduled to be released later this year. For more on the Rooster Teeth 2018 animation slate, pick up the next issue of The Austin Chronicle, on the streets on Jan. 25.