Foul-mouthed fun for the holidays 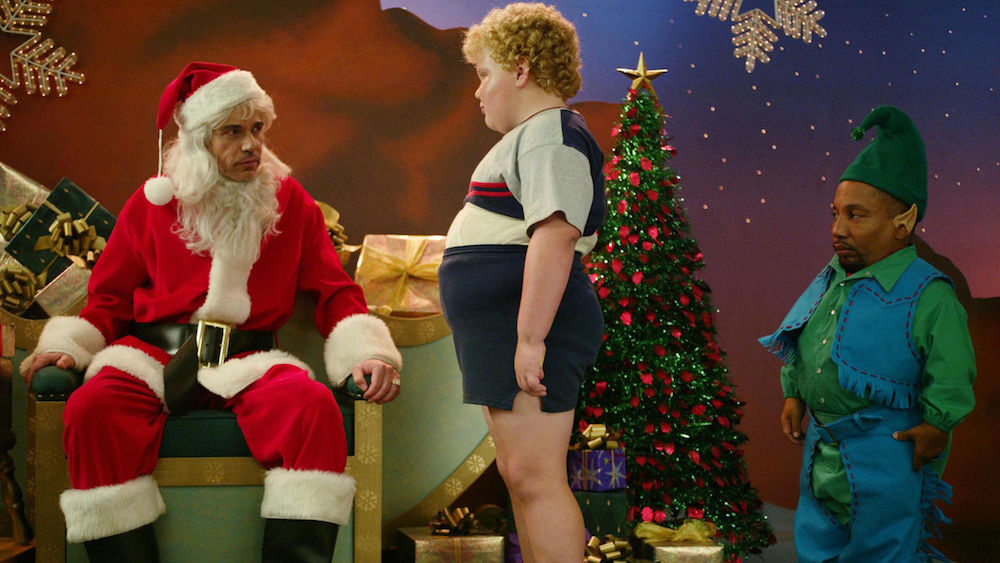 Into this season of sugarplums and stockings, glad tidings and goodwill toward men, 2003’s Bad Santa introduces itself with all the Christmas cheer of a lump of coal. The first words out of the mouth of Santa Claus? “Hey, can I get another drink down here?”

The next words from Willie (Billy Bob Thornton), a department-store Santa, are the impressive cataloging of his life’s disappointments, failures, and abuses, culminating drily, “but nothing has ever sucked more ass than this.” If that doesn’t have you chuckling, then best to get out now: The next 93 minutes are more of the same, the gleefully unapologetic grandstanding of a soulless schmuck ever three sheets to the wind and hanging but a fingernail from complete self-destruction.

Willie actually has a pretty good gig: The Santa job is just a cover for the yearly con he pulls with his dwarf partner, Marcus (Tony Cox). Every Christmas, they target a new store, case the joint while they put in the hours as Santa and elf, then clean it out after-hours on Christmas Eve. Willie can barely keep it together for their latest scam, passing out on the job and ducking into the women’s dressing rooms for his own version of milk and cookies, but his luck turns when a tubby, sad-sack 10-year-old (Brett Kelly) decides to adopt Santa and invite him home to the mansion he shares with his dotty grandmother.

There are lessons to be imparted here, from Bad Santa to the forever-bullied boy, and yes, a half-hearted quest to root out Willie’s dormant (dead-drunk) heart, but happily, that message gets mostly lost amid Willie’s enthusiastic plumbing of the depths of human degradation. He’s not just a bad Santa, he’s a shockingly bad man, and there’s some shockingly funny stuff to be found in Thornton’s deadpan delivery of a guy whose modus operandi owes a major debt to Charles Bukowski.

Bad Santa was a curious choice for director Terry Zwigoff to follow up his Oscar-nominated Ghost World. His follow-up boasted none of the sharp wit, none of the profundity, and none of the teeth of Ghost World; it’s more like two hours of gumming a bottle of whiskey. Disney – parent company to Bad Santa distributor, Bob Weinstein’s Dimension Films – was rumored to be pretty miffed about Bad Santa’s desecration of the sacred St. Nick figure, which reaches perhaps its most deliciously gutterbound when Willie nails a doofy bartender (Lauren Graham) who likes to moan “Fuck me, Santa; fuck me, Santa” in the backseat of Willie’s stolen car.

No doubt about it: Bad Santa is blasphemous. But, to borrow a phrase from another famous hedonist, Homer Simpson, it’s also sacrilicious.

Bad Santa is currently streaming on Netflix and Hulu.

A version of this post was previously published in 2003.