Celebrate the season in Sunnydale, the Oval Office, and more

The best Christmas episodes take the basic DNA of a TV show and turn up the volume – metering out a dollop of sentimentality to a drama, say, or inspiring a sharp comedy to even more razoring barbs. Here are some of our favorites, all currently streaming.

The Belchers mean well, most of the time, and 100% of the time their good deeds are the making of delightful mishaps. Because Mom Linda (voiced by John Roberts) loves Christmas to bits, she buys her tree so early it desiccates before the big day, and that’s why the Belcher clan has to drive an hour away to a tree lot on Christmas Eve. There, they cross paths with a candy cane truck driver with a bad case of road rage.

If you’ve never seen Bob’s Burgers, this season 3 standout is a fine place to start: It provides a crash course in what makes each Belcher so particular, and dear: Downer dad Bob (H. Jon Benjamin) is a good man who can’t catch a break – of course he’d attract the attention of a homicidal truck driver; Linda, his counter ballast, so cheery; sensitive, boy-obsessed Tina (Dan Mintz), who asks Santa for a dry erase board so she can write down, and then erase, her most private thoughts (“penis fly swatter”); roly-poly middle child Gene (Eugene Mirman), a dreamer and a tiny bit of a dim bulb; and shifty Louise (Kristen Schaal), pint-sized but with a bright future (most likely to mastermind a bank heist? Or overthrow a small country?).

“Christmas in the Car” ranks among the best of Bob’s Burgers not because it does anything especially showy but because it does what it always does, and exceptionally well: an inspired premise, character-inspired laughs, a touch of sweetness, and some A-plus poop humor. – Kimberley Jones 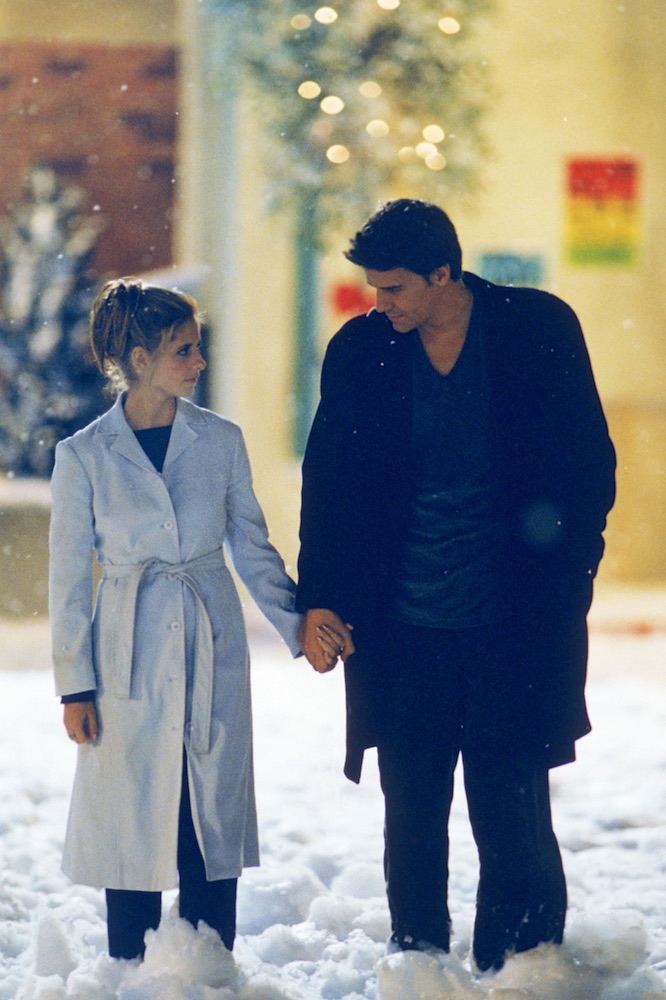 The thing about holiday episodes from television series is, they don’t always age so well. But for the emo and aughts-nostalgic, Buffy the Vampire Slayer’s singular Christmas episode fills a void for Yuletide demons whether you’re a casual viewer or devoted follower.

”Amends,” aired in 1998 during season three, finds the recently re-souled Angel (played by a pre-Bones/more eyeliner David Boreanaz) haunted by the ghosts of his Christmas-kills past. (Devoted fans will remember this episode offers a glimpse at the final season’s big bad, but that knowledge isn’t necessary for enjoyment.) Despite Buffy’s best efforts to stop seeing her ex-vampire beau, our heroine (sporting some very questionable bangs) gets pulled into Angel’s nightmares. There she sees his violent past, realizes with her slayer superpowers that something is afoul, and races to save him from the demon’s torment and his growing suicidal tendencies.

Like many Buffy episodes, “Amends” blurs the line between teen romance drama and real talk. But watching it with adult eyes removes some of the Christmas-miracle feel (snow in Southern California ultimately saves Angel’s life) and shines an L.E.D. light on Buffy’s unexpected (domestic) violent undertones. Superpowers and vampire strength don’t justify intimate partner violence. The episode, perhaps, takes on a more serious challenge than simply telling a holiday tale. Like Dickens' A Christmas Carol and It’s a Wonderful Life before it, Buffy’s interpretation of the holiday spirit is seeped in modern realities. Buffy and Angel’s relationship may not be the one to model your own after, but that final scene of the pair walking hand in hand as the snow falls offers a semblance of warm and fuzzies. – Sarah Marloff 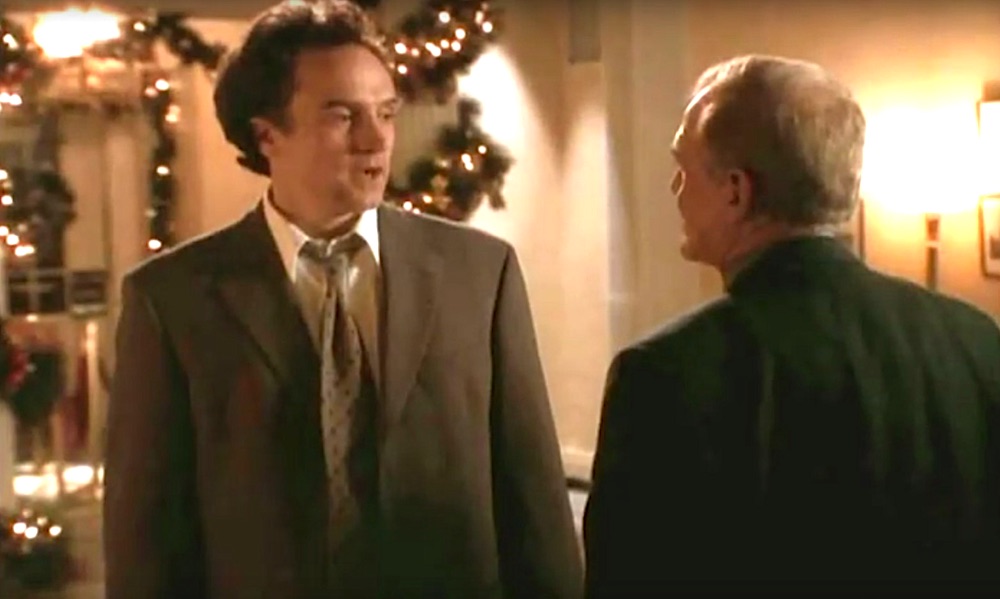 Used to be, the line was that The West Wing was sweet panacea to the Bush years. Turns out, we need now more than ever its alternate reality of a president who is both erudite and fundamentally decent.

Playing a traumatologist brought in to treat Josh, the always-great Arkin cuts through Josh’s bullshit to make for an excellent sparring partner, but this is Whitford’s showcase (he took home the Best Supporting Actor Emmy in part for his performance here). Add to that fresh meat for Josh-Donna ’shippers (her tender attentiveness is what prompts the intervention), a honest portrayal of the menace that is “Carol of the Bells,” and an exquisite John Spencer delivering a Leo monologue for the ages:

“This guy’s walking down the street when he falls in a hole. The walls are so steep he can’t get out. A doctor passes by and the guy shouts up, ‘Hey you. Can you help me out?’ The doctor writes a prescription, throws it down in the hole, and moves on.

“Then a priest comes along and the guy shouts up, ‘Father, I’m down in this hole can you help me out?’ The priest writes out a prayer, throws it down in the hole, and moves on.

“Then a friend walks by: ‘Hey, Joe, it’s me can you help me out?' And the friend jumps in the hole. Our guy says, 'Are you stupid? Now we’re both down here.’

“The friend says, ‘Yeah, but I've been down here before, and I know the way out.’”

Now 17 years later, a nation nervously sweating through our Christmas sweaters, eyes fixed on the Doomsday Clock, The West Wing is still sending us tidings of comfort and joy. – K.J.

30 Rock enticed plenty of big-time celebrities to guest star over the years (Oprah Winfrey, Matt Damon, Julianne Moore, Jon Hamm), but the one that reaped the most comic rewards was Broadway star Elaine Stritch, who played NBC exec Jack Donaghy’s (Alec Baldwin) crabby mom Colleen in eight episodes over the course of the series’ run, three of them Christmas-themed. It’s hard to pin down a favorite, so you might as well start with the first, with season 2’s “Ludachristmas.”

Stritch was nominated for an Emmy Award for the episode – she’d get another nod for season 3’s “Christmas Special” – and really, all her Christmas appearances follow roughly the same template: Jack dreads spending the holidays with his relentlessly judgy, more-than-a-little-racist mother; TGIF showrunner Liz Lemon (Tina Fey) tries to broker a peace; and Jack and Colleen grow closer together not in despite of their combativeness, but because of it.

In this case, that closeness comes at Liz’s expense when Colleen goes on the attack against the visiting Lemon clan (played by Anita Gillette, Buck Henry, and Andy Richter). Jack is at first envious of this seemingly well-adjusted family – unfailingly supportive, loving, unembarrassed to wear matching snowflake sweaters – but the Lemons’ perfect façade crumbles once the drinks start flowing and Colleen sharpens her talons. Realizing every family is fucked up, just in different ways, Jack wishes Merry Christmas to his own mommy dearest. When it comes to the holidays, might as well dance with the one that brung ya. – K.J. 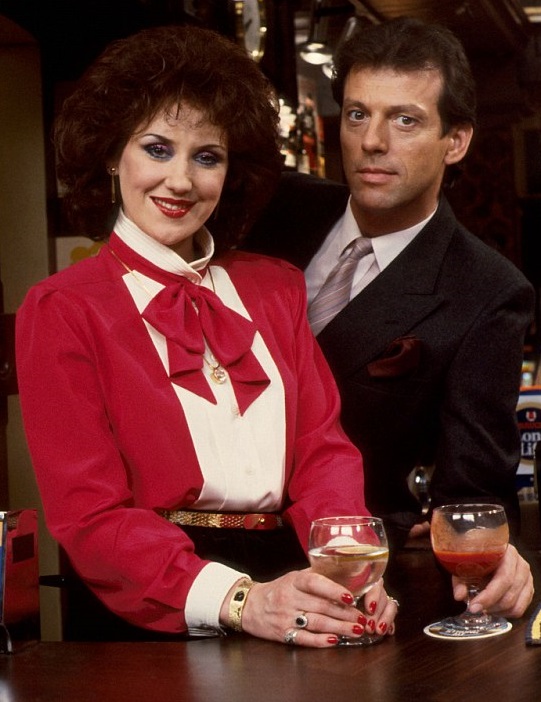 Christmas TV specials are for Christmas cheer, and a moment of hope in the darkness of winter. No, wait, that's American Christmas TV specials. Across the Atlantic, a Yule episode of a British show is a deep wallow in misery and despair. Honestly, you're far more likely to be murdered in an insurance scam (Hollyoaks) or hit by a plane (Emmerdale – no, really) than make it to the after dinner nuts.

The watershed came Christmas Day, 1986, on the BBC's iconic and long-running Eastenders. Set in the fictional London borough of Walford, at its heart was the Queen Victoria Pub, owned by the mercilessly co-dependent Wattses: womanizing "Dirty" Den (Leslie Grantham) and alcoholic Angie (Anita Dobson). Christmas saw the two of them, hammer and tongs, playing out a working class Who's Afraid of Virginia Woolf?, with 30 million viewers tuning in, hoping they would finally make it work. 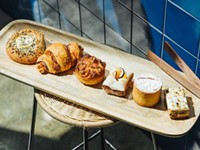