The one we can't seem to quit 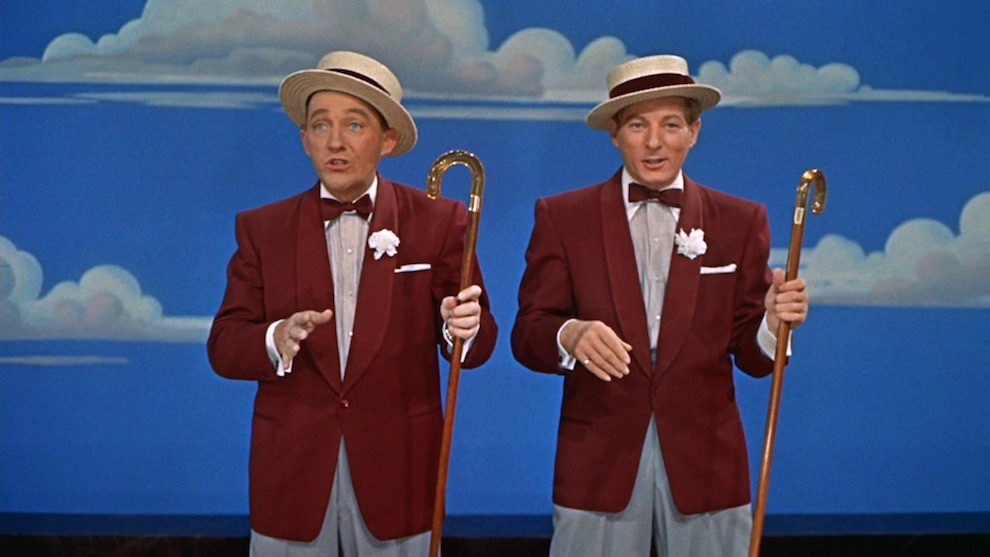 How many generations does White Christmas have left in it, I wonder?

It’s not that there isn’t still an appetite for decades-old Christmas-themed entertainments pitched at a mass-appeal audience; see: 1946’s indestructible It’s a Wonderful Life; the Rankin/Bass Sixties stop-motion favorites “Rudolph the Red-Nosed Reindeer” and “Frosty the Snowman,” or the traditional cel-animated classics of the same decade, “A Charlie Brown Christmas” and “How the Grinch Stole Christmas!”; and 1983’s A Christmas Story, so irresistible it’s been running on 24-hour repeat on TV every 25th of December for 20 years going.

The trouble with 1954’s White Christmas is that it’s not a very good movie. It’s not even the best version of Bing Crosby crooning the titular song. That honor goes to 1942’s Holiday Inn, which first introduced the Irving Berlin-penned – and, notably, entirely secular – future megaseller wishing us all so many days so very merry and bright. (Appropriately dropped out of heavy holiday rotation for its wincing blackface performance number, when Holiday Inn is rebroadcast, it’s frequently with that scene cut or contextualized.) Holiday Inn’s filmmakers were surprised by the runaway success of “White Christmas” – they’d bet on another Berlin song, a romantic ballad, as the one to break from the pack – but its wistful lilt struck the right note with a nation at war and servicemen and women stationed far from home.

White Christmas capitalizes on the song’s wartime associations in its opening prologue, with the enlisted Bob Wallace (Crosby) and Phil Davis (Danny Kaye) performing it for troops within shuddering earshot of the front. The action then shifts a decade later, with Bob and Phil – now a hit duo – hooking up with the Haynes sister act (played by Rosemary Clooney and Vera-Ellen) to save a troubled inn run by Bob and Phil’s former commanding officer, Gen. Waverly (Dean Jagger).

As with Holiday Inn, the film is wall-to-wall Irving Berlin tunes, although none of them have the punch to put them in the upper echelons of the great (greatest?) American songwriter’s pantheon. That feeling of inferior material spreads like a puddle, which New York Times critic Bosley Crowther hinted at in his theatrical review: “Everyone works hard at the business of singing, dancing and cracking jokes, but the stuff that they work with is minor. It doesn't have the old inspiration and spark.” 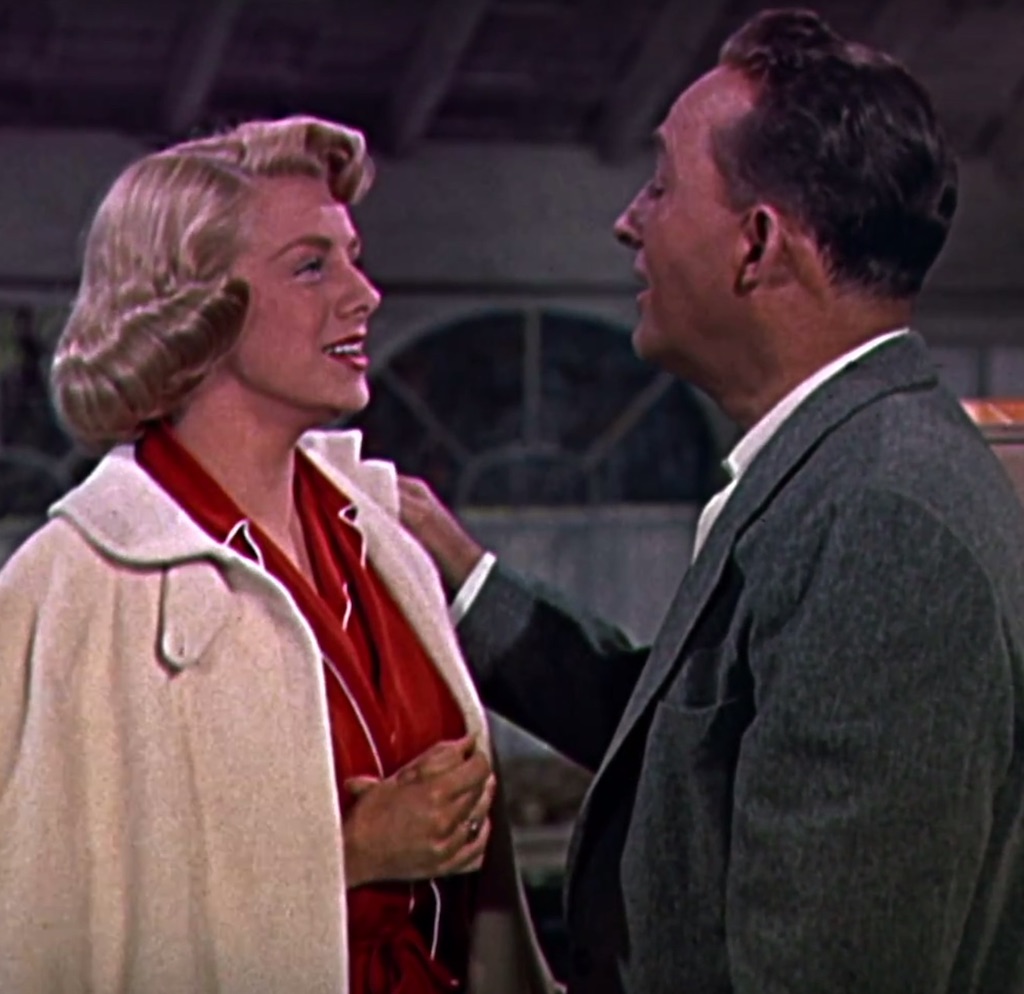 Crosby was still a star in 1954 – and a pro – but he was 51 and looked it; when he prods the 26-year-old Clooney toward a late-night snack of liverwurst and buttermilk, the effect is more paternal than amorous. As his sideman, Kaye doesn’t have the finesse of Fred Astaire or the spastic adorability of Donald O’Connor (the studio’s number 1 and 2 picks for the part; Astaire passed and O’Connor had to drop out). And Vera-Ellen, a ferocious dancer and veteran of movie musicals, weirdly seems to take literally the frequent proscenium framing of director Michael Curtiz (Casablanca, Mildred Pierce), forcefully making eye contact with the camera like an ingenue trying to win over a talent scout in the front row.

The movie endures. On a recent rewatch, scratching my head over forgettable songs and jokes that landed with a thud, I wondered why, until a scene with the retired general had me sniffling. His is a touching subplot about a proud man put out to pasture sooner than he’d like, and Jagger underplays it, unbound by the let’s-put-on-a-show upbeat tempo of his costars – a tiny alcove of naturalism in a movie musical fantasyland, a genre on its way out even if nobody knew it yet.

Clooney – whose name probably doesn’t ring any bells for anyone under the age of 30, save its similarity to George’s (he’s her nephew) – well, Clooney makes a meal out of a misunderstanding that leaves her despondent. You even forget it’s dowdy old Bing that’s got her so blue, and she cuts through the embarrassing choreography of "Love, You Didn't Do Right by Me,” downcast then chin up like a dare, that smoky alto cutting right to your heart.

There’s Crosby and Kaye’s plucky number “Gee, I Wish I Was Back in the Army,” sung in tribute to their general, but no doubt triggering for older audiences a generalized nostalgia. (A lot of things were supposed to change after WWII, and they didn’t. A lot of things weren’t supposed to change, and they did. Also, Korea was a very kind of different war.)

“White Christmas” is reprised in the blowout finale, the four leads trimmed in Santa’s red-and-white, surrounded by a gaggle of pink-cheeked tots. My sniffle grew steam with a sense memory of watching that closer in my grandmother’s bedroom, way past my bedtime and extra-drowsy from the heater. My brother and I had the run of most of her home, but gramma’s bedroom was invitation-only – a grownup place with a jewelry box and an elegant settee, both of which now live in my own bedroom. Her wonderful smell, that commingling of a perfume and a person, I’ve never been able to reproduce.

And so White Christmas endures – despite not being a very good movie. Because it triggers memories. Because likely your relationship to the film is tied up with your relationship to loved ones, maybe gone. I suspect its expiration date is looming. And that’s fine. There are other Christmas movies – better, fresher movies – that will stitch together the same kind of generation-bridging heartstrings.

Bluntly? I think White Christmas mostly stinks. But me, gee, I wish I was back in my grandmother’s cozy bedroom.

White Christmas screens tonight (12/13) at the Paramount Theatre and Dec. 24-25 at AFS Cinema. It’s also available to stream on Netflix and available on DVD and Blu-ray.