Classic black comedy has the blues 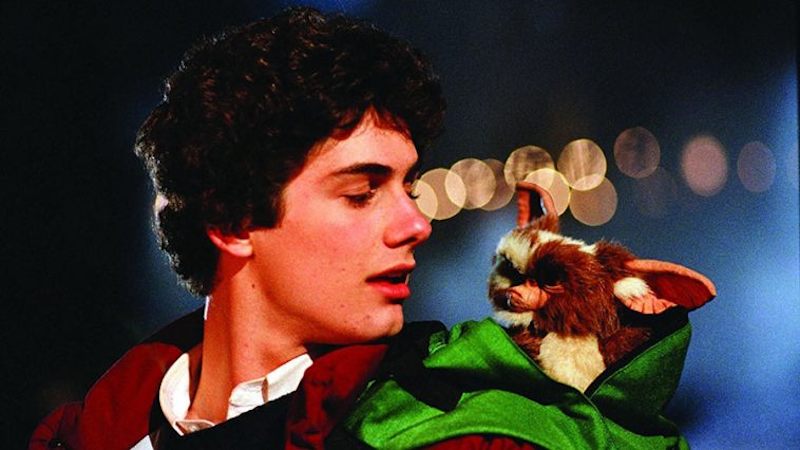 Melancholy coats Christmas classics like tinsel. Dickens to Lethal Weapon, “the suicide rate is always the highest around Christmas,” announces baby-faced Phoebe Cates during one of her two pivotal scenes in Gremlins, expert and enduring holiday catharsis.

According to commentaries on the film’s Blu-ray, director Joe Dante found himself in career arrears despite well-received B-movie horror fare Piranha (1978), wicked ripper The Howling (1981), and a segment for the big budget Twilight Zone: The Movie (1983), a modest success undercut by the on-set death of three actors in co-producer John Landis’ portion. There’s also the matter of Dante having helped dream up and direct Rock & Roll High School for mentor Roger Corman.

Fortunes being what they are, an unsolicited script for Gremlins arrived courtesy of Steven Spielberg, Landis’ partner and another entry overseer of Twilight Zone. Spielberg reportedly loved the early spec script by Chris Columbus, who would soon be directing Adventures in Babysitting, Home Alone, and Mrs. Doubtfire. Dante says that Spielberg, flush off all-time grosser E.T. the Extra-Terrestrial and producing Poltergeist, signed him on and promptly disappeared to make Indiana Jones and the Temple of Doom.

Apparently that never prevented Indy’s keeper from riding herd on major facets of Gremlins, including the casting of Zach Galligan in essentially his big screen debut as protagonist Billy Peltzer. Galligan knew Cates, fresh off Fast Times at Ridgemont High, whose Judge Reinhold enjoys two early scenes in Gremlins before being cut from the rest of the film, and Spielberg saw the pair’s real-life chumminess on their audition together. Initially, the studio wondered if Cates could be considered wholesome enough in light of Fast Times at Ridgemont High.

Still acting, Galligan was basically never heard from again save for 1990’s Gremlins 2: The New Batch, also directed by Dante and better than it has any right to be. 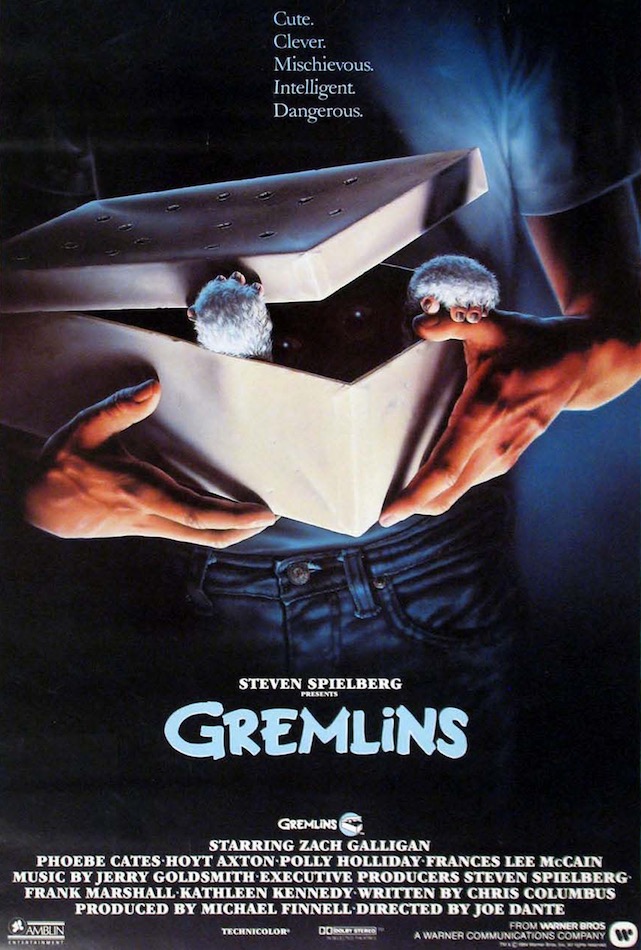 Both Galligan and Cates epitomize virginal, teen Eighties innocence in Gremlins, but they’re sad, so sad. Sad eyes, sad smiles, sad backstories. And 1984’s Gremlins bred comedy all right – black comedy – but those same belly laughs mask increasingly violent mayhem wrought by the titular plague. Famously, that along with “the beating heart” from Indiana Jones and the Temple of Doom, say both Galligan and Dante, prompted the advent of the PG-13 rating.

As Billy Peltzer, Galligan grins sweetly at his hapless father, memorably played by Hoyt Axton (author of “Joy to the World”), whose early Christmas present to his son is a mogwai from Chinatown he calls Gizmo. Voiced by Howie Mandel in baby-speak, the distant cousin to Star Trek’s cuddly tribbles soon spawns far nastier clones, who then morph into nightmarish creatures all too gleeful to induce homicidal mischief. Faster than you can yell "run for your lives," a storybook Christmastime town covered in snow devolves into a harrowing night between pest and host.

The sequence in which Frances Lee McCain as Billy’s mother in the Peltzer house by herself once the gremlins have hatched from Alien-like egg cones elicited shrieks of giddy fright in the theatre, Johnny Mathis’ velvet “Do You Hear What I Hear?” accompanying her downstairs as she wields a carving knife. Her life-and-death roll in the family Christmas tree ends in a graceful beheading originally hers in Columbus’ script. Gremlins never goes pitch black, but by the conclusion, emotional release has been well and truly achieved.

Central to it all remains Cates’ last-act explanation of why she hates Christmas and how she knows Santa Claus is a fraud. Dante fought all parties to maintain the scene, as memorable in its own way as its actress’ poolside turn in Fast Times at Ridgemont High. Her preternatural cuteness, along with that of Galligan, Gizmo, and the overall playful tone of the film, retains a zinging, yet wistful nostalgia relegating Gremlins to family entertainment of the PG-13 variety, but adults will nod knowingly at Cates’ naked truth in her big scene:

“While everybody else is opening up their presents, [the suicidal] are opening their wrists.”

The Alamo Drafthouse presents the Gremlins “Rule Breakers” Party, featuring a taped conversation with Joe Dante, at various theatres throughout December.
Gremlins also screens on Saturday, Dec. 23, noon, at the Westgate and Gateway theatres as part of the Regal Holiday Classics series for a discounted $5 ticket price.
Prefer the couch? Gremlins is streaming on Netflix now.