How to avoid being dragged away on Krampusnacht 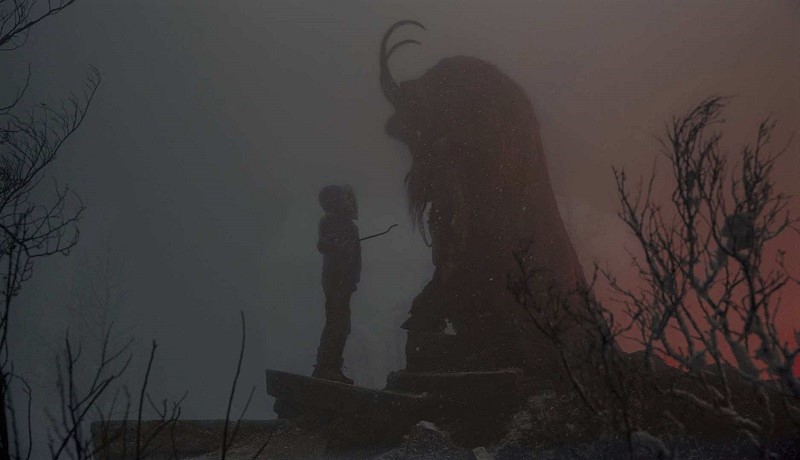 "And I'd like a toy train, and a pony, and not to be dragged to the Unterwelt." It's the least wonderful time of the year in Krampus.

There are four simple rules to Halloween. Wear a costume. Hand out treats. Never blow out a Jack O' Lantern. Always check your candy. How come there's no simple, handy-dandy guide to Christmas like that?

If you're wondering exactly where those Samhain strictures come from, they were set down in Michael Dougherty's gloriously ghoulish 2007 anthology Trick'r Treat. They are clearly laid out, with the clearest consequences, and if they are violated then Sam, the guardian of Halloween, will come to enact a suitable revenge.

In his follow-up, 2015's Krampus, Dougherty turns to another holiday, and yet again suburban America gets on the wrong side of a seasonal spirit. This time, he didn't have to invent his own demon (although, to his credit, Sam is arguably the first true horror icon to have crawled out of hell in decades). Instead, he unleashes the great and mighty Krampus upon the spoiled and greedy.

Krampus, you say? Who he? Well, remember how Santa Claus brings toys and candy and joy to everyone on the nice list? Well, Krampus deals with the naughty column in the annual ledger. Frankly, there's more of Old Scratch than of jolly old Saint Nick about him, as he beats the wicked with birch twigs, and throws the worst miscreants into his sack, never to be seen again.

What, you thought you were going to get away with some coal in your stocking? Did no one mention that Krampus seems to dwell, not at the North Pole, but in the depths of the Stygian forests, and atop the most innaccessible peaks of the Tyrol? This is Teutonic Mitteleuropa incarnate with a sinister list of all your transgressions.

Teddy bears that bite, fairies that shred, elves that steal in during the night, and a Jack that you’ll wish stayed in the box.

In Krampus, it's the Engels family – young Max (Emjay Anthony), father Tom (Adam Scott), mother Sarah (Toni Colette), and sister Beth (Stefania LaVie Owen) – that get the unwelcome visit from the horned one and his evil toy shop of terrors. Teddy bears that bite, fairies that shred, elves that steal in during the night, and a Jack that you'll wish stayed in the box.

But wait? Exactly what sin did this mundane family enact to endure such an uncanny home invasion?

Unlike Trick'r Treat, Dougherty never makes it quite as clear what counts as a transgession sufficient to hear the sound of cloven hooves on your roof. There has to be something more specific than just "Be nice, don't be naughty." So, by extrapolation, here are a few clues that we winkled out of the events of this most terrible and fantastical of Christmas Eves.

1) Never invite your relatives over. If the Engels had just closed the curtains and ignored the door when Sarah's irksome sister Linda (Allison Tolman), her hideous brother-in-law Howard (David Koechner), and their awful brood came over for a holiday dinner, then Max never would have got so mad about their lack of Christmas spirit, and he would never have torn up his Christmas list, summoning Krampus. Which brings us to …

2) Never make a Christmas list. If Max hadn't made his list, then he never would have had a list to get angry about and throw away. Guess what, kid. If you wanted an XBox 1, and Santa brings you two satsumas and a Fidget Spinner, just be glad for what you got.

3) Never hit the Black Friday sales. The opening slow-motion sequence of a store stampede in search of the cheapest 90" TV would be grounds for a criminal conviction, never mind having Krampus point an accusing claw at you.

4) And finally, and most importantly, if your migrant grandma (played here with suitable long stares and knowing eye-rolls by veteran German TV actress Krista Stadler) suddenly starts speaking English and tells you to never, ever let the fire go out, then you never. Ever. Ever. Let the fire go out.

Krampus is available on DVD and Blu-ray now, and streaming on HBO.