Turns out Christmas dinner is just as fraught in French 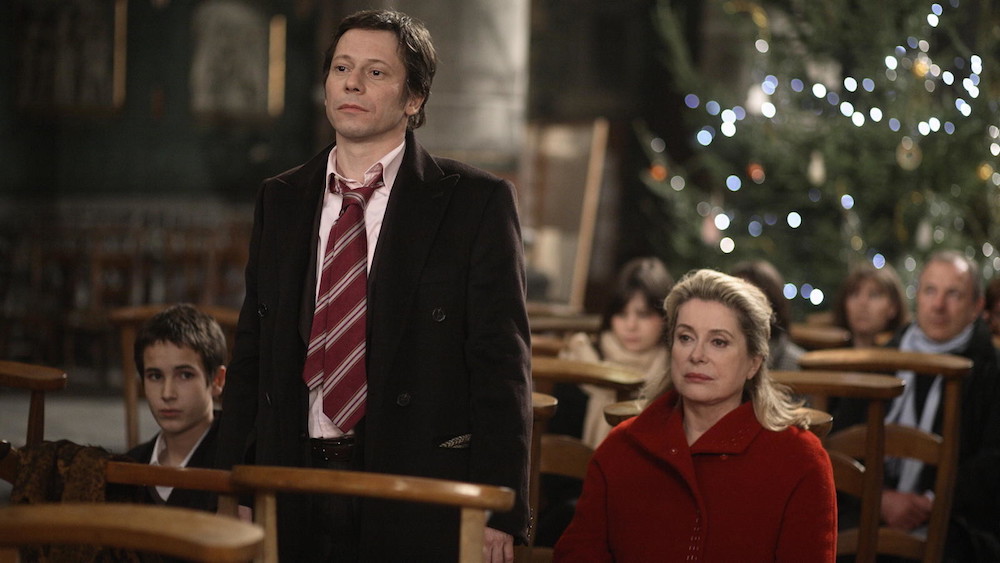 “Merry Christmas, baby,” croons Otis Redding from the scratched LP in the living room, but there doesn’t seem at first like there’s much to be merry about at the Vuillards' Christmas gathering – certainly not mom’s cancer or cousin’s heartsickness or grandson’s cracked-up dalliance with knives, to name a few in a stocking stuffed with maladies.

The family dynamics are limned in the opening scenes of French writer/director Arnaud Desplechin’s 2008 film A Christmas Tale (Un Conte de Noël). Decades ago, Junon (Catherine Deneuve) and Abel (Jean-Paul Roussillon) lost their first child to a rare leukemia that is now destroying Junon. The surviving children, now adult (if by age alone), are called upon to test as possible bone marrow matches for Junon. There’s the eldest, playwright Elizabeth (Anne Consigny), sunk by an impenetrable sadness; black sheep Henri (Mathieu Amalric), banished from the family years ago; the sunny youngest son, Ivan (Melvil Poupaud), rehabilitated from a gloomy adolescence by his wife, Sylvia (Chiara Mastroianni, Deneuve’s daughter with Marcello Mastroianni); and cousin Simon (Laurent Capelluto), a morose painter who hangs at the edge of the family and the frame, until his own private sorrows take center stage fully two-thirds into the film.

And that is one of the many minor miracles of this piece – to have room to accommodate so many characters, and so completely. By sheer force of personality, Henri – his anger and his alcoholism – dominates the film. He’s tempered by his surprise guest at the house, a Jewish girlfriend named Faunia (Emmanuelle Devos, Amalric’s partner in Desplechin’s course-charting My Sex Life… Or How I Got Into an Argument), who wears a perpetually bemused look at the many idiocies of the brawling Vuillards. She’s a beautiful foil for Henri, daffy-seeming yet sensible, sometimes softening the blow of his hairpin turns. Desplechin is fond of twinning, but never with the same pair for long. A Christmas Tale – acid-dipped but sentimental in the very best sense of the word – is like some marvelous do-si-do in which the family is always spinning partners for another go-round of accusation and confession, cruel brush-off and soft glimpse of grace. There’s a giddiness to this whirling dervish of a film, with its spastic skipping from character and catharsis, its near fetishistic camera trickery, bursts of song, fairy-tale iconography (including voice-over narration, chapter heads, puppetry, peephole lensing, even a mythic beast in the basement), and loving lifts from the likes of Vertigo and Nietzsche and A Midsummer Night's Dream, which closes the film with Puck's "If we shadows have offended ..." and is alluded to throughout via Mendelssohn's opera, Max Reinhardt's 1935 film, and mirroring plot points.

Desplechin has cited among his influences the films of Ingmar Bergman and Wes Anderson; he’s certainly amassed just as staggeringly good a troupe of performers as any those two directors ever corralled, and he also shares the same tendency to tap the same themes and motifs from previous films. There’s a danger of diminishing returns in this looping back, but if there’s a tipping point (and there is – just ask Anderson or Woody Allen, whose masterstrokes in neuroses surely inspired Desplechin), then he hasn’t gotten there yet. He’s powerfully fixed on the fallout from familial and romantic disconnect, and this is his most beautifully rendered realization of that yet. A Christmas Tale is a perfectly pitched telling of what happens when families get together – how we are free to be our best and worst while in the company of those who have loved and loathed us most intimately. The Vuillards, however fractured, know one another’s rhythms and rituals, and Desplechin knows just how to convey them in the subtlest of ways – how a shot of Sylvia’s bared feet tiptoeing around her sleeping children can speak volumes about the cadences of family life. It’s but a snatch – which is often all Desplechin has time to give us – but in these snatches exists a whole world of longing and resignation, self-seeking and aggravating unawareness.

Late in the film, he gathers many of the characters at a dance in the community rec center – the same place Sylvia first met the Vuillard boys, all blustering to bed her. Ivan mans the turntable for a revisionist play of “Love and Happiness.” Everyone is drunk and content, at least in the moment. Ivan scratches and spins, teasing the chorus, and just when it finally kicks in to “happiness is when …,” Desplechin cuts away – and in that cut lies the very rub of adulthood. There’s never any doubt that the wildly, sublimely dysfunctional Vuillard famille will continue to make a go at rounding somewhere near the neighborhood of happiness. And with a lot of luck, they just might know it when they get there.

A Christmas Tale is currently available on Hulu, Film Struck, and other streaming sites.

Versions of this review were previously published when the film was released in theatres and on DVD.