The giving season can be murder in the original slasher Who said Christmas is fun? Cold. Damp. Scarlet-clad strangers breaking into your house. Carol singers. It's Halloween with pneumonia. So no wonder its most glorious gift was one of the first slasher flicks.

It's not the original holiday horror. Two years earlier, in 1972, ABC inexplicably decked the halls with pitchfork murders in Home for the Holidays. That same winter, super-lowball sleaze fest Silent Night, Bloody Night gave John Carradine one of those embarrassing late career paychecks.

Not that Black Christmas has any rights to be any better. Director Bob Clark had emerged out of the cinematic swamps of Florida with drive-in fodder like She-Man, and the brilliant/bizarre Children Shouldn't Play With Dead Things. He escaped over the border to Canada and in quick succession cranked out the searing Vietnam veteran bloodchiller Dead of Night, followed by his full-bore full-gore masterpiece Black Christmas. 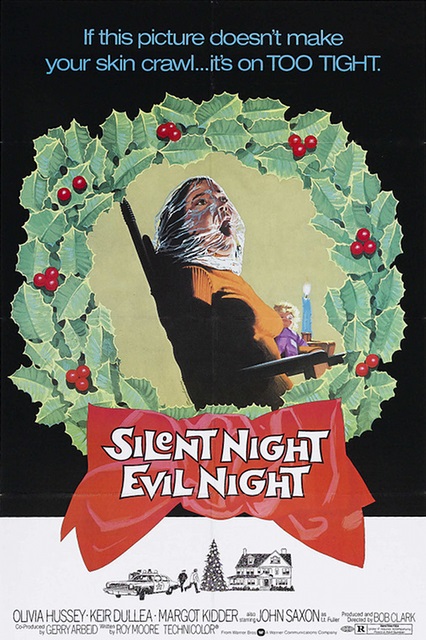 Just as Santa has many names, so does Black Christmas, but the iconic poster remains the same whatever the title

Of course, if the name Bob Clark seems familiar, it's probably because you saw it in the credits for another tale of the season of good will. Yes, the Bob Clark that hides a lunatic in the attic of a sorority house also froze Flick's tongue to a pole in A Christmas Story.

But just because Black Christmas has a mighty body count, that does not mean it's completely removed from his later family-friendly success. In some ways, they're actually very similar. Both have straight-forward narratives (in Black Christmas, it's a killer picking his prey; in A Christmas Story, it's Ralphie's hunt for a Red Ryder Carbine-Action Two-Hundred-Shot Range Model Air Rifle), but the real fun is in the laconic, sardonic humor, and the looping side-stories that are less digressions than delicious world-building.

Take out some of the most terrifying scenes in 1970s horror (death by dry cleaning bag, anyone?) and it's just about everything you ever loved about cinema in that decade.

A ground-breaking plot device ("The calls … they're coming from inside the house!") that has been emulated but never equaled? Check.

Margot Kidder, drunk and bawdy as a sailor on shore leave? Gloriously check.

Black Christmas hits all the essentials of 1970s innovative exploitation, plus John Saxon as a wise-ass cop. Want to know why horror directors like Wes Craven and Robert Rodriguez cast him as the determined face of law enforcement? Black Christmas, that's why. It's like every cop in a horror movie has been playing catch-up. Seriously, no offense, Sheriff Hopper, and all due respect, Ranger McGraw, but there's a greater put-down from law enforcement than John Saxon snarling, "I don't think you could pick your nose without written instructions."

Black Christmas (1974) is currently available on Blu-ray, and streaming on Amazon and Shudder.