Holiday Viewing: The Shop Around the Corner

The essential Jimmy Stewart Christmas movie (no, not that one)

James Stewart was perfect for the part – “the antithesis of the old-time matinee idol; he holds his public by his very lack of a handsome face or a suave manner.” Frank Capra may very well have been drawn to the same qualities when he cast Stewart in It’s a Wonderful Life, but in 1940, it was Ernst Lubitsch who spotted the everyman in his leading man. The Shop Around the Corner was Stewart’s first and only collaboration with Lubitsch, and while Stewart’s screen persona – one of essential decency – was already well-established by 1940 (bolstered in back-to-back Capra pictures You Can’t Take it With You and Mr. Smith Goes to Washington), for Lubitsch this Christmastime film marked a swerve from his usual m.o.

Lubitsch’s career moved through a number of key changes – first acting in Max Reinhardt’s Berlin troupe, then helming historical pictures at UFA; a move stateside where he made musicals frequently pairing Jeanette MacDonald and Maurice Chevalier, then dropping the song but still making music with a run of witty sex comedies. He also spent a year, not very successfully, as head of production at Paramount.

There’s no overstating how deliciously risqué Lubitsch’s Thirties pictures were, how they blithely pirouetted around the pre-Code line of respectability with stories of extra-marital flirtation and partner-sharing (including the sterling Trouble in Paradise and underrated Design for Living). In collaboration with some of the great screenwriters of early American cinema – including Samson Raphaelson, Ben Hecht, Billy Wilder and Charles Brackett – Lubitsch applied his patented touch to romantic comedies that were irresistibly louche and bouncy with hedonistic zeal. Arguably – because Lubitsch fans like to argue about which film was his best – that style hit its apex with 1939’s sublime Ninotchka, which starred Greta Garbo as a Soviet apparatchik seduced by the life-affirming frivolity of a hat.

So what inspired him to trade in the playboys and aristocrats and charming scam artists he so often trafficked in for a tender love story about shop clerks?

According to biographer Scott Eyman (Ernst Lubitsch: Laughter in Paradise), Lubitsch told the New York Sun in November of 1939 that “We must show people living in the real world. No one used to care how characters made their living – if the picture was amusing. Now they do care. They want their stories tied up to life.” 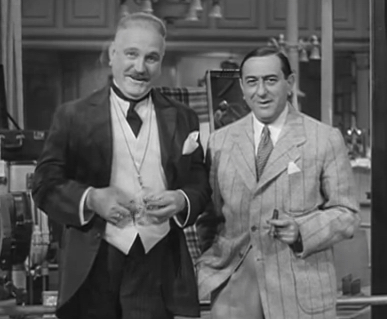 Director Ernst Lubitsch (right) appearing in a trailer for The Shop Around the Corner with actor Frank Morgan (shop owner Mr. Matuschek)

Lubitsch’s own life had experienced plenty upheaval; his second marriage was strained, and in September of ’39, he almost lost his infant daughter in a maritime disaster, when a German U-boat torpedoed the SS Athenia, the first British ship to be sunk during World War II. Hitler’s march to power deeply affected Lubitsch, a German Jew; his follow-up to The Shop Around the Corner, 1941's To Be or Not to Be is a brilliant act of comedy as political resistance.

Certainly the setting of The Shop Around the Corner was more autobiographically close for the director than any of his previous outings; the film’s leather goods store in Budapest isn’t so far removed from his father’s tailoring shop in Berlin. At Matuschek and Co., shop clerks Alfred Kralik (Stewart) and Klara (Margaret Sullavan) bicker constantly, no love lost between them. Besides, they’re already taken; each has been corresponding with an anonymous pen pal in letters addressed to “Dear Friend.” The wrinkle, of course, is that Kralik and Klara have been unknowingly penning love letters to each other.

Plot sound familiar? Originally adapted from a Hungarian play by Miklós László, it’s since been refreshed three times: in the 1949 musical In the Good Old Summertime starring Judy Garland, 1960 Broadway musical She Loves Me, and Nora Ephron’s 1998 comedy You’ve Got Mail, which cannily adapted the story to nascent internet culture.

Even if you’ve never seen any of these iterations, you know where The Shop Around the Corner is going. There’s such sweet inevitability to Klara and Kralik’s love story. That doesn’t mean the movie is all softness; Lubitsch gooses laughs from an adulterous affair and a suicide attempt, after all. The real surprise is in how earnestly the director of some of the finest, spikiest romantic comedies ever made is willing to step off the gas and let heartfelt romance win the day. And it so very winning.