Rob Reiner Goes All the Way With LBJ

Tackling the contradictions of the unexpected presidency It's a piece of political lore that Lyndon Baines Johnson would hold court with the bathroom door open. "That's a true thing," said Rob Reiner. "He would hold meetings while he was doing his business. It definitely gives you, I don't want to say a leg up, but something up."

In his newest film, LBJ, Reiner casts Woody Harrelson as the last Democratic president from Texas in the two weeks between President John F. Kennedy's assassination, and Johnson unexpectedly telling Congress he was pushing ahead with the Civil Rights Act.

It's a return to the smoke-filled rooms of DC for Reiner who, while famous for classic entertainment like The Princess Bride and When Harry Met Sally …, has previously plunged into the maelstrom of American politics with Ghosts of Mississippi, and the Aaron Sorkin-penned The American President. Now he's deep in the national debate, with LBJ to be followed by his examination of the lead-up to the Iraq war, Shock and Awe. "I've been political my whole life," he said, "but I think as I get older, I want to do the things I want to do."

In LBJ, he reframes Johnson's legacy, and how the assassination of Kennedy became the roots of his own presidency. Moreover, Reiner focuses on how "Landslide Lyndon," the epitome of the old-school machine Democrat, picked up the liberal banner where it fell in Dealey plaza. He said, "Second to FDR, he has the greatest achievements of any president, and if it were not for Vietnam, he would have been seen as one of the great American presidents." 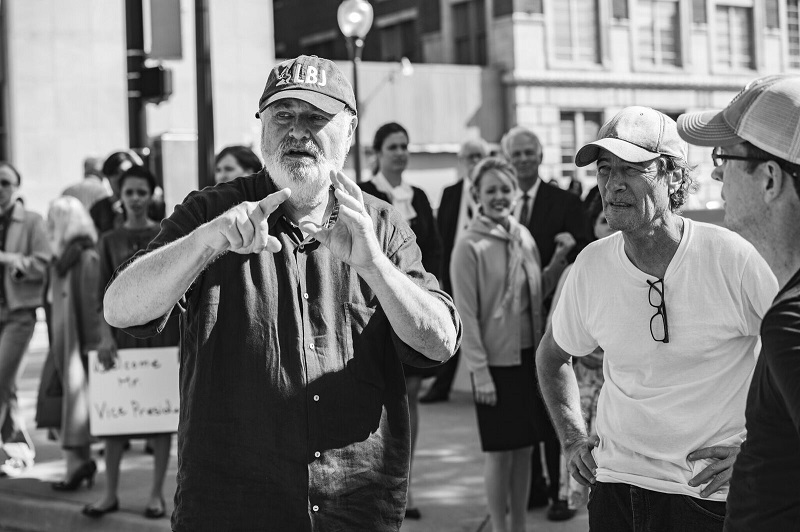 "As I get older, I want to do the things I want to do." Rob Reiner re-enters the political field with LBJ.

Austin Chronicle: Johnson is arguably the president who has the worst reputation compared to his actual achievements.

Rob Reiner: And I think it's because of the Vietnam war. His whole presidency got overshadowed by the war, which was a terrible foreign policy disaster, and his domestic legislative agenda gets completely overlooked.

AC: That's a fascinating component of Johnson's legacy. You can look at any president and find lousy foreign policy decisions, so why do you think that, for LBJ, that's the shadow cast over everything else?

RR: Because millions of people died in that war, and America lost 50,000, and there was no strategic objective. There was a stated strategic objective, but that turned out not to be true. We have normal relations now with Vietnam. The whole idea of the Domino Theory, which was certainly something that everyone was frightened of, this Communist takeover of the world, just didn't exist.

But there was a scare, and if you look at America, and you look at the two terrible foreign policy decisions we made, the Vietnam was is second to the Iraq war. That was fueled by a lot of nationalism which came on the heels of 9/11, and this fear that we were going to be taken by Islamic terrorism. So we made another mistake, and I never thought in my lifetime we'd be lied into two different wars.

AC: Knowing that's the bigger part of Johnson's reputation, why do this story about his path to the Civil Rights Act?

RR: We definitely have a skewed view of who he is based on, not only the Vietnam war, but on people's image of him being a bull-in-the-china-shop, arm-twisting tough guy. But he also had a very insecure side. He had this fear of not being loved. It almost paralyzed him at times, from being able to move forward.

Taking that sliver of time, which is when he comes under the most pressure of having to assume the presidency with the death of a beloved president, feeling that the country will never accept him or love him the way they loved Kennedy, that to me is the opportunity to examine who this guy really was, and how he was able to overcome that, and then move forward with this great legislative agenda.

“He was not the man of the great ideas. He was the man that could facilitate something at the right time.”

AC: By picking that time frame, you have to film one of the most famous sequences in American history – the assassination of Kennedy in Dealey Plaza. That's been re-created so many times for so many films, but was it hard to find something new to say? You at least have the advantage of showing events from Johnson's point of view.

RR: That's the difference, and we do see how it affects him. But we do still have to re-create what actually happened, and the only thing we know about it is from the Zapruder film. So one of the things I did, I dressed a cameraman up as Zapruder, put him in the exact same spot that Zapruder was, and told him, basically, tape the entire motorcade. So we used shots that he took. You remember when Kennedy's limo comes out from behind the street sign? That's exactly what you see in the Zapruder film at that exact moment.

But I also only had six hours to shoot, because we were in the actual Dealey Plaza in Dallas. They told us, "You can have six hours, you can't tie up traffic all day." So it was very tense for me, because I had four cameras, and I knew I could probably send the motorcade through maybe three times. So I had 12 angles picked out, which I did ahead of time. So as soon as we got one, we went to the next angle, and we got all the angles we needed.

AC: You do look at the balance in the relationship between LBJ and JFK, which was reliant on the fact that Johnson was the better operator.

RR: He was not the man of the great ideas. He was the man that could facilitate something at the right time. He does argue very forcefully that the Civil Rights Act will never become law if you put it on the floor of the Congress at this time. The truth is, talking to some people who covered the Hill at that time, he was right. That bill was never going to get out of committee, and it wasn't until President Kennedy was assassinated that Lyndon Johnson realized, now's the opportunity.

As we say in the film, you're fighting two presidents: the legacy of one, and the strength of the other.

LBJ is in theatres now. For review and showtimes, visit our listings page.