Did sexess spoil Jayne Mansfield, or was it … Satan?

Sixties-era sex kitten Mansfield was the focus of the tattletale, tabloid press long before reality television arrived to blight our lives. If the B-movie bombshell (and proto-feminist) had arrived in our own overly image and hearsay-saturated world, she’d have her own show on Fox. Or Netflix. Which is the one with the nudity again? 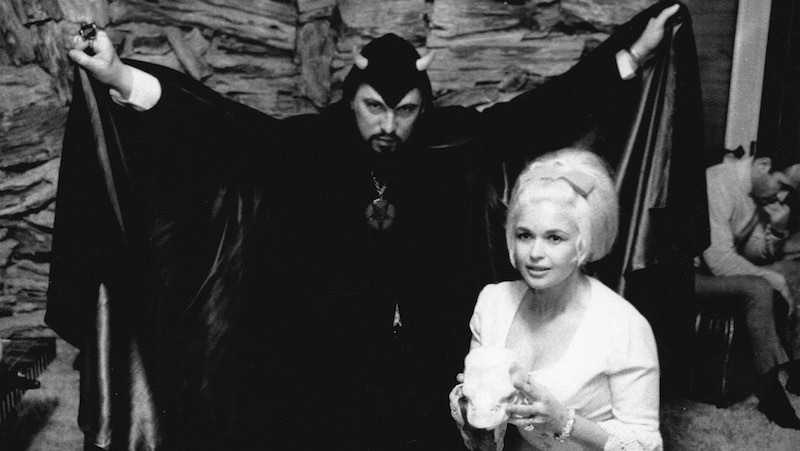 Co-directors Todd Hughes and P. David Emersole’s doc – “based on a true story … of hearsay and rumor” – isn’t the Mansfield history lesson we need, but instead a radical take on the tropes of “documentary filmmaking” and a deconstruction of Mansfield’s insatiable hunger for attention, via interpretive dance. That may sound like a bizarro choice for one of the most infamous wipeouts in all of Hollywood history, but as the film notes, there’s little verifiable knowledge about Mansfield’s personal history, and almost none of her inner thoughts were recorded by anything other than the media of the time. She died too soon to outline an autobiography, not decapitated along with her lawyer boyfriend as the hysterical press banner-headlines shrieked, but instead, as if this were somehow better, scalped alongside two pre-seatbelt doomsters while three of her children slept in the backseat. Frankly, all that the filmmakers of Mansfield 66/67 (note the 666 triptych, please) and the Hollywood Babylon gang – Kenneth Anger, for the most part – have to work from is Mansfield’s movie appearances, Sixties German television interviews (Mansfield spoke five languages fluently and played the violin as well, thus giving the lie to the whole “ditzy blonde” backstory), and a whole lot of salacious speculation from the screeching fan rags and the news of the day. And yet it works. This film sucks you into a whirlpool of bad choices, lousy relationships, meta-self actualization, and plenty of pop psychology. It all adds up to a slice of unmissable misery that Ken Burns wouldn’t, thank goodness, lay a hand on.

Certainly a hell of a lot of the Mansfield death gossip revolves around her relationship with Anton LaVey, High Priest of San Francisco’s grave-breaking Church of Satan. On her way down the slippery slope of stardom, with five children and an unquenchable desire to stay foremost in the public eye, Mansfield and LaVey, himself a sly, carney-raised narcissist and fame whore, hung out and did … whatever. Was there an affair? Maybe. Was LaVey a genuine Satanist? Not unless shaving your head and putting on a faux-widows peak cape ensemble and posing for garish, goony pictures is Lucifer’s doing. (Wait: the Kardashians, et al. Quoth Flip Wilson, “The devil made me do it!")

Featuring keystone interviews from Anger, John Waters, A.J. Benz, Hitchcock blonde and PETA person Tippi Hedren (LaVey had a pet lion), as well as Warhol/Corman superstar Mary Woronov and some terrifically hot ’n’ heavy vocal breathiness courtesy of Ann Magnuson “as Jayne Mansfield,” 66/67 is a slice of retro, film-freak gadzookery. There are zero mythic Mansfield mysteries solved, but the whole “doc” ends up being an ultra-entertaining examination of a very specific starlet in an extremely anxious and treacherous timeframe. Entertaining, that is, until you see those black and white nightmare still shots of the automotive aftermath: the crash-battered corpse of Mansfield’s beloved Chihuahua, that uncomfortably familiar and impossibly grisly pile of blond hair caught in the Weegee-esque glare of some unknown shutterbug, and … oh, god, whatever you do, don’t look. But we can’t help it, can we, and neither could the girl.