AFF Interview: Here We Are

Director David Bellarosa on Austin as the velvet coffin 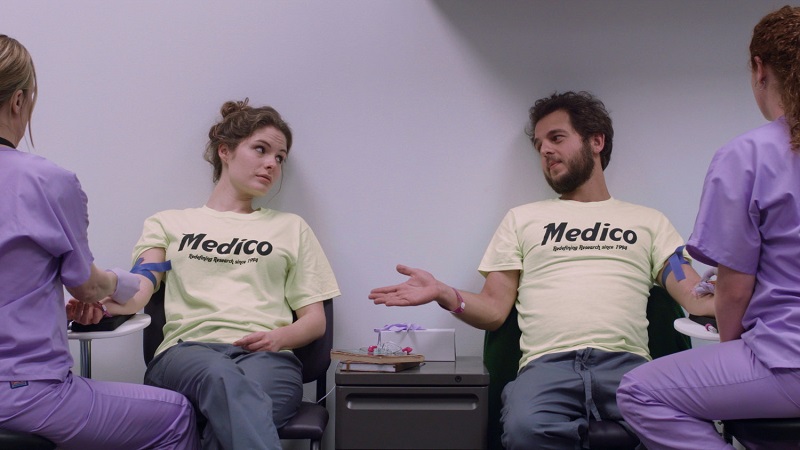 If your education about Austin was just from films, you'd think that it was all Lone Stars and Barton Springs. But in comedy/drama Here We Are, as feckless failed writer Andy puts it, "It's a nice place to live, but I ain't trying to die here."

The dry but touching satire debuts at the Austin Film Festival this weekend – the perfect setting for a movie about the love-hate relationship with the town. The script by writer/director David Bellarosa even calls it "the velvet coffin," a variation on another popular nickname: the velvet rut. "I prefer that," said Bellarosa. "There are so many movies that romanticize Austin, Texas, that I don't think we need another one."

It's not that Bellarosa doesn't like Austin: it's just that, after an initial visit turned into a year-and-a-half stay, he's well aware of the seductive allure of slumming in the ATX. It took moving away, then moving back eight years ago to found his Lonely Giant production and set design company, that he avoided the pitfalls of easy living here.

There's a lot of that experience in Here We Are. Alex Dobrenko (the Arlo in Arlo & Julie) plays Andy as deep in the rut, stuck in a dead-end relationship, with no job, and sharing a crowded house with a random coterie of roommates. It's only when he signs up for a drug testing program, and meets fellow volunteer Misty (Olivia Grace Applegate, The Honor Farm) that he starts thinking there's more to life than Red River and breakfast tacos.

Bellarosa's Austin is filled with recognizable local institutions – not the simple coding of "Keep Austin Weird" signs and Willie Nelson shirts, but the cheap taquerias and halfway decent bars with halfway decent house bands. Yet alongside the heartwarming mainstays, there may be some painful twinges of recognition for anyone who struggled getting by in a boomtown: student debt, career rejection, selling blood and sperm, doing "foot stuff" for cash.

“We were away from our friends and our families, and any opportunity that being in a certain place where you had grown up would afford you, we had left all that behind. So knowing one another, and being real close and being close friends, was important to our survival.”

Austin Chronicle: What's the worst thing you've ever done to get by?

David Bellarosa: Cleaning up actual human shit, literally shoveling shit, is probably the worst job I've ever done. I was working locations on that movie Julia & Julia, with Meryl Streep, and I had to clean up Porta-Potties.

I was a short order cook here for a while in this really high-end kitchen, and the boss was a Jesus freak. That was really annoying. And I tried to do the medical research thing twice, but I couldn't even do that right. One time, I was too fat, and my body mass index was one over the limit. The second time, they found out I had smoked tobacco – I used to smoke a lot – so I had nicotine in my blood, so they rejected me. I couldn't even do that, but my friend did it, and one of my producers, he's done probably a dozen of those studies, and he helped to build my set. He was my art director as well.

Some jobs that are pretty terrible, I've actually enjoyed. I worked in a lumber yard, where it was my job to sort all the reclaimed lumber and get all the nails out of it, and clean it up. I did that when I was trying to finish up this movie.

AC: The film is not just about Andy's inertia, but the stagnant ecosystem of friends and hangers-on that are just as stuck in their ways as him.

DB: That came from the people I met along the way. We were all away from home, we all moved from all over the country, we were away from our friends and our families, and any opportunity that being in a certain place where you had grown up would afford you, we had left all that behind. So knowing one another, and being real close, and being close friends was important to our survival – that, and whatever little jobs we could do to get by while we tried to pursue our own thing. Finding ourselves in the middle of nothing else but everything we knew that we didn't want to do, that was what inspired this.

And people move on. I left for a year, I came back, a lot of my other friends have left and gone back to New England or Chicago, one guy went back to Canada. Some people stay, some people stick it out. Some people get married, some people have kids. I've got this movie. I've been working on it forever, and now it's done, I honestly don't know what it feels like to not have that to do every day.

AC: Hey, you still have festivals and distribution to go.

DB: We still have a long way to go, and doing all this creative promotional stuff for the festival, remaking Here We Are artwork, has been getting me back into the creative side, and that's been nice.

For more Austin filmmakers at AFF, read our festival picks.