Into the Woods With The Heretics

Evil in the woods comes back to haunt the last survivors in The Heretics, screening courtesy of Other Worlds Austin tonight (Image courtesy of Black Fawn Films)

Other Worlds Austin may be a month away, but the SF-centric festival is mining its horror-themed substrata Under Worlds tonight with the U.S. premiere of The Heretics, the latest terrifying creation of the burgeoning terror community of … Guelph, in Ontario, Canada.

The filmmaking scene in the Royal City has a lot of similarities to its cinematic kin in Austin: off the traditional studio radar, but with a strong community that has helped each other and worked together. The Heretics director Chad Archibald seems a little surprised that anyone outside of the scene has even heard of his hometown, until the name Gabriel Carrer (In the House of Flies, The Demolisher) comes up. Not only does he also hail from Guelph, but the pair are old friends and colleagues.

Even before making movies together, Archibald said, "We grew up on horror movies. We'd go to garage sales every weekend and collect VHS horror movies. We'd have walls of them, and just loved them." When they finally broke into the business, they did so together. "Me and him did our first film, Desperate Souls together, then I produced In the House of Flies, and then I was filming when he was making Demolisher, but we still worked together, helped get locations and stuff."

Another expression of this Guelph camaraderie is Black Fawn Films, where founders Archibald and Cody Calahan, plus Chris Giroux, and Jeff Maher have become the core team, floating through multiple positions on each other's projects (Calahan wrote the script for Archibald's The Drownsman, which was also produced by Giroux, who also produced Maher's OWA 2016 late-night fright Bed of the Dead, who shot Archibald's Bite and … you get the drift). Archibald started making films in 2002 with the earliest wave of prosumer digital, pre-ordering "the first camera that looked like film. It changed everything, so we went out in my backyard and started making movies." With his earliest films, he admits, "We made every mistake in the book, and then the next one we made less mistakes, and we kept on doing it."

Over time, that evolved into Black Fawn Films, which in 2014 signed an eight-picture deal with Breakthrough Entertainment. Archibald's quick and nimble crew blasted through that slate in three years, and recently re-upped their relationship with the distributor. Yet at the heart of it all is that recurring quartet, swapping roles and responsibilities. Archibald said, "Jeff Maher has DP'd our last eight films. Me and Chris G. produce, and me and Cody flip back and forth directing. We have small budgets and small crews, but our crews are basically the same people, and we call it the Black Fawn family."

With no seeming deliberate irony, deer horns feature prominently in The Heretics, a character-driven horror about Gloria (Nina Kiri, from The Handmaid's Tale and another Black Fawn picture, Let Her Out). She was kidnapped by a mysterious cult, whose members then commit suicide in a bloody and masked ceremony. A year later, she is trying to get her life back together with her partner Joan (Jorja Cadence), when she is captured by another survivor of the night, Thomas (Ry Barrett, star and co-writer of Carrer's The Demolisher). But not all is as it seems, as Thomas sheds a whole new light on what happened one year ago.

It's built from the Black Fawn model, blasting from pitch to shooting in six weeks, with Maher behind the camera, Calahan and Giroux producing, and a script by Bite scribe Jayme Laforest (who is also writing the next Fawn creation I'll Take Your Dead). At this point Archibald would seemingly not have it any other way. "It's a small group of people who work really hard and are really good friends." 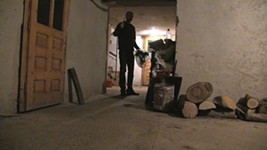 Other Worlds Austin Review: Be My Cat: A Film for Anne
Bizarre Romanian horror brings insane spark to found footage