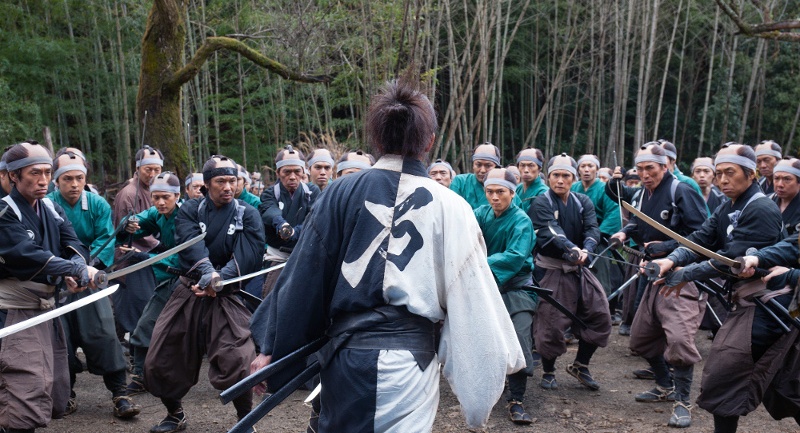 Why would legendary Japanese director Takashi Miike want to adapt the big-screen version of Hiroaki Samura's mega-selling manga Blade of the Immortal? Because he's Takashi Miike, and that's reason enough.

For his 100th directorial credit (he's already wrapped two more since filming this), he returns to Edo-eraJapan for the first time since 2012's sedate drama Hara-Kiri: Death of a Samurai. However, Blade is much closer to the blood-spraying drama of 2011 chanbara period actioneer 13 Assassins, with even more fantastical elements.

The sword-wielder here is Manji (actor, musician, and anime voice-over stalwart Takuya Kimura) who has been cursed with immortality by a mysterious nun after a life of violence. Heading into self-exile in a rickety shack, his isolation is ended by Rin (Hana Sugisaki, who also voices the title character in Fantastic Fest-featured anime Mary and the Witch's Flower). She needs an unkillable warrior to help her defeat the Ittō-ryū, a rogue sect of warriors determined to overturn the staid formality of samurai fencing schools by killing as many sword masters as possible – including Rin's father.

Tetsuya Oishi's script keeps many of the signature characters and events of the original, but inevitably has to make some changes and sacrifices. After all, it would be impossible to boil down Samura's 30 volume story into 140 minutes (although, if anyone wants to give Miike the money for a full adaptation, it's doubtful anyone would complain). Purists may find issue with what he leaves in and takes out, or the fact that the blood worms that keep Manji alive seem even more capricious than in the book.

Yet it's hard to find fault with the end result, especially Kimura's coldly hilarious take on Manji as a sardonic pin-cushion, as likely to be impaled on a dozen blades as he is to be doing the impaling. A mass of scars (the blood worms only do -so- much) and dark humor, he's the perfect Miike anti-hero.

However, Oishi's most significant shift is in the emphasis and underlying discussion of the story. Rather than pondering immortality and death, Oishi looks more at why we kill. As Manji and Rin pursue/are pursued, they meet opponents with differing motivations - some venal, some misguided, some honestly held. The question is whether their intention is worth the cost of so many lives, and neither Manji nor the vengeance-driven Rin are immune from this scrutiny.

In that shift, Oishi squares what has always seemed like an impossible circle within action films: that the audience has come for the violence, but are also supposed to be outraged by it. Instead, he explores why the viewer should be OK with Manji's bloodshed, while blowing holes in the formality and moral strictures of Bushido, and the self-justificationss his swordsmen and swordswomen use for their wanton acts of carnage.

And carnage there is a-plenty. From the opening monochrome massacre that provides Manji's motivation, through the closing battle of Manji versus his nemesis Kagehisa Anotsu (Sota Fukushi) and half the shogun's army. He even slips in a moment that will make fans of his transgressive masterpiece Ichi the Killer squeal with nauseated delight.