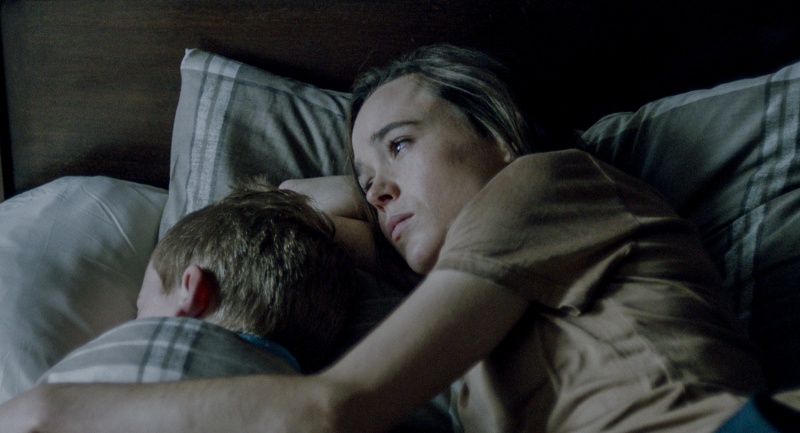 Ellen Page living in the post-post-Apocalypse in The Cured

Ask Frankenstein. Ask the Wolfman. There is no more tragic moment in a horror film than when the monster realizes exactly what it is, and and what it has done. Irish zombie horror The Cured takes that crystallizing moment of stomach-dropping angst, and builds a moving and incisive drama around it.

The core concept is one of impossible nightmare. A zombie virus has swept the world, and Ireland has been particularly badly hit. However, a cure for the Maze virus has been found, one that works for 75% of the infected, and they can return to their old lives.

The plight of the cured is personified in Senan (Sam Keeley), who has returned to the family home, welcomed back by his sister-in-law Abbie (Ellen Page). She stuck around to raise her son Cillian (Oscar Nolan) after his father was devoured. She's glad of the help, and glad to have got Senan out of what are basically internment camps for the cured. But there are plenty of neighbors less thrilled to live next door to what they still see as a monster. Senan falls back into a friendship with fellow cured Conor (Tom Vaughan-Lawlor), as one of the few people who understands what he has been through – a bond that raises even more eyebrows. But Senan's worst tragedy is that he still remembers everything he did when he was a zombie, especially one unforgivable hidden sin whose revelation could destroy what's left of his fragile existence.

For much of its duration, The Cured is relatively bloodless, but that does not mean it lacks pulse or heft. Although it is set in the Republic of Ireland, writer/director David Freyne undoubtedly looks north to the decades of sectarian fighting. That feeling is amplified by the presence of prime instigator Conor (Vaughan-Lawlor coincidentally is currently appearing in Maze, retelling the story of a mass IRA breakout from the Maze prison in Northern Ireland). As the former barrister reduced to street sweeping, and balancing his political aspirations against his terrorist tactics, there's an air of a Martin McGuinness to him.

Yet, like all the best zombie movies, the story is not a straight analogy, but a metaphor, one that touches poignantly and mournfully on complicity and guilt, on the logic of violence and the seduction of extremism. That's barely the start, with questions of addiction, forgiveness, refugee integration, AIDS, and even a sideways comment on American immigration policy. Where The Cured exceeds many similarly ambitious zombie metaphors is in its depth and sensitivity.

Above all, it is an intimate story, of a man trying to live with his most hideous actions, and Keeley gives a sunken-cheeked pain to Senan's plight. His silences are given poignancy by Page as a woman in denial, and Vaughan-Lawlor as the devil on his shoulder, both pulling him in impossible directions.

The Cured may owe much to viral shockers like 28 Days Later, but its political and personal insight elevates it alongside the best of contemporary European realism.