Grappling with faith, sexuality, and powers in Norway 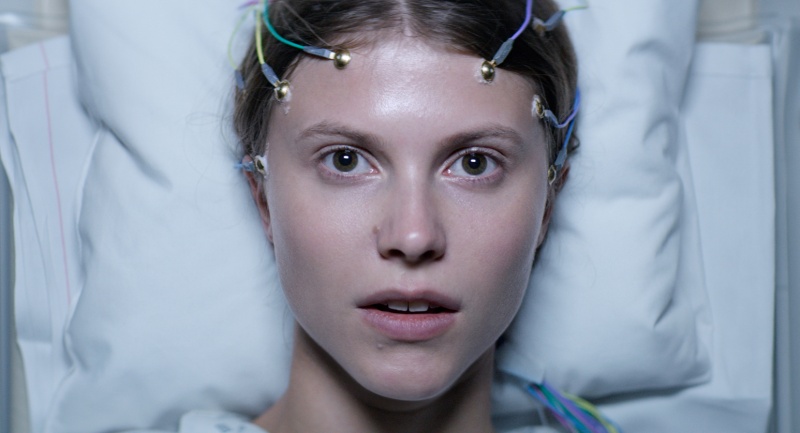 Hard to be a god: Eili Harboe in Thelma

The writer/director reunites with his Louder Than Bombs and Oslo, August 31st scripter Eskil Vogt (himself a Fantastic Fest veteran with 2014's Blind) for a very unconventional coming-of-age story. It is as much an examination of Norway's internal struggle between modernity and its Evangelical Lutheran tradition as it is the dark fantasy story of the titular Thelma.

Played by Eili Harboe (from FF 2015 natural disaster revival The Wave), Thelma has left her small-town rural home to attend university in Oslo. Out of her depth, awkward, and emotionally dependent upon her parents (Henrik Rafaelsen and Ellen Dorrit Petersen), she eventually finds herself in the orbit of Anja (Okay Kaya), and quickly finds herself struggling to reconcile her old beliefs with the heat and passion of her new relationship.

There is a yearning delicacy to their town mouse, country mouse bond, and this all plays into Trier's well-established credentials as a chronicler of intimate domestic details. That's when he injects fresh components that hew closer to the eerie. Seizures, strange dreams, odd coincidences, disquieting views of the woods, and the ultimate sign of the uncanny, suicidal birds: All hint that there is more upsetting Thelma than her first real crush (for Greek scholars, Trier and Vogt have hidden a subtle hint in the character's name).

Under the guise of a romantic culture clash story, Trier creates an understated tale of supernatural love, as Thelma grapples with her own nature. Tellingly, he never simply discounts the conservative forces embodied in her parents. Instead, he finds flaws and fear, compassion and tragedy, in everyone.

Yet those subtly inserted supernatural elements mean Trier's story comes with an itch at the base of the skull. For every moment of Thelma's self-actualization, there's a shadow hanging over her, placing this into a classic science-fiction lineage that only becomes clear in its final moments. Not since the closing sequence of fellow Scandinavian Ruben Östlund's Fantastic Fest breakout, 2014's Force Majeure, has a film so deliberately re-framed its own message.