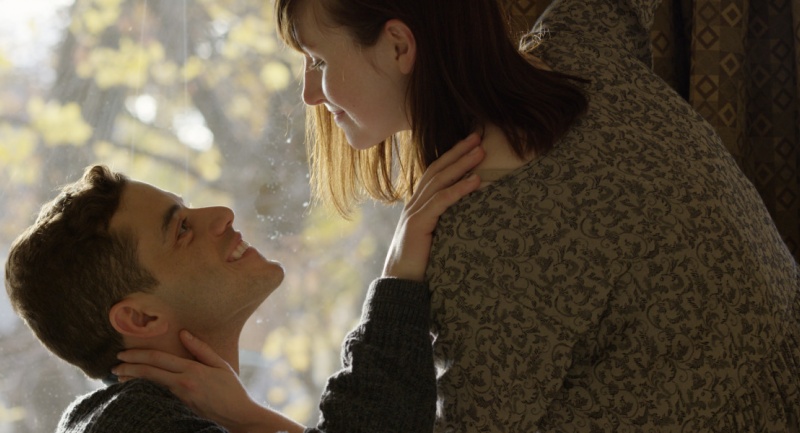 And sorry I could not travel both."

Smith's debut feature, The Midnight Swim, found metaphysical terror and wonder in loss and family (see our interview with Smith, Drowning in Mystery on The Midnight Swim, July 6, 2015). Here she focuses on a man unsure of himself, of his identity, and of his place in the world.

Rami Malek (Mr. Robot, Short Term 12) is first seen as Buster, a mountain man on the run from Montana cops. Then he is Jonah, an exhausted concierge working nights at a hotel, desperate to find a way to build a home for his wife (Kate Lyn Sheil, Outcast, Sun Don't Shine) and daughter. Then he is also a nameless man in a rowboat, adrift in a calm ocean.

The underlying story is about how the three are connected, but it is not in narrative clarity or big reveal that their links are to be found. Smith's films are about mood and wonder, and to ask for a linear A-B-C plot is like asking Terrence Malick to not shoot trees. Instead, this is about Malek's trifurcated performance, as a man scrabbling to come to terms with an unimaginable yet mundane universe. There are no extreme visual theatrics here: more often than not, Smith and cinematographer Shaheen Seth (who worked with her on her first feature) leave the camera locked off, occasionally even taking a security camera POV for the dreary, upscale hotel in which Jonah spends his drooping-lidded days.

Of course, the story of a man with a slippery grip on reality, whose path is shaped by the intervention of a voice deliberately hidden from others, is going to evoke The Shining, but that is inadvertent and misleading: Or rather, it is an oblique reference point upon which Smith builds. It's the same as the man in the boat, being a Jonah without a whale. It's a touchstone, not a cornerstone. Instead, she and Malek explore questions of faith, of identity, of isolation and cosmic meaning and paranoia – the latter represented by DJ Qualls (fresh from his own TV success in The Man in the High Castle) as the Last Free Man, a proto-Alex Jones conspiracy theorist, rattling on about Y2K, Eve's clitoris, and the Inversion.

Yet it's really all bound together by another extraordinary performance by Malek. His three parallel roles – Smith cuts back and forth, forward and backward, between their narratives – are all fragments of men, in turns exhausted, silent, angry, untrustworthy, and devoted. He constructs through hints and subtleties: for example, never explicitly having Jonah talk about his Mexican lineage, but instead clashing with his in-laws about whether his daughter should be bilingual.

He obviously has the most fun with Buster, and it's no surprise. Clearly based on the bizarre true story of the North Pond Hermit, it's a delightful and tragic exercise in studied weirdness, as Buster breaks into empty holiday homes, and takes just enough to get by. Yet he is only a counterbalance to – and in turn, counterbalanced by – his other performances. Even static and near-silent, he is captivating. If anyone was wondering whether he can really pull off the bombastic pomp of Freddie Mercury in the upcoming Queen musical biopic, this polar opposite should set minds at rest. Anthology horror has been on an uptick recently, with the V/H/S and ABCs of Death series proving there is space in the linked-shorts genre for great innovation. That's why there was buzz four years ago when XX (Magnolia) was announced,and its long delayed DVD Blu-ray release lives up to some of that expectation.

It undoubtedly starts on a high note, with Vuckovic's adaptation of horror auteur Jack Ketchum's dry nightmare "The Box." Aside from one particularly grisly scene, it continues the excellent track record of nerve-jangling Ketchum translations that depend more on tension than gore. It's very much a dark social commentary, to which Clark adds a tender black humor for "The Birthday Party," a comedy of lethal errors that puts a Roald Dahl-esque spotlight on Melanie Lynskey as a mother trying and failing to put the perfect party together for her daughter. The Zodiac Killer (AGFA/MVD) is either misguided journalism or sleazy exploitation, or more likely both. In 1970, director Tom Hanson decided he would make a fictional film based on the real-life Zodiac Killer, the notorious and never-caught serial murderer. His declared intention was to lure the actual killer out of hiding. Whatever Hanson's motivations were, they are all derailed by his trip through the skeazier corners of San Francisco's barflies and baffled cops. Do not confuse this with David Fincher's masterful 2007 examination of one of America's greatest criminal enigmas: This is low-budget sleaze, with red herrings, pet rabbits, psychics, extended diner sequences, middle-aged dope fiends, disturbing misogyny, untrustworthy bald men (they's evil, I tells ya!), and performances that scrape along the underside of competent.

That said, Hanson had an eye for reprobates, bullies, and other denizens of America's lo-fi underbelly. The Zodiac plot often runs in parallel, without intersecting, but that's really the point. These were arbitrary, cruel, capricious crimes, and the fact that the Zodiac was daring the authorities to catch him makes it all the more grueling and intriguing (for more on this restoration by the American Genre Film Archive, read Exposing The Zodiac Killer, Sept. 16, 2016). • Nacho Vigalondo has been a genre fan favorite since his debut, Time Crimes, but made a major dent into mainstream success with his revisionist take on kaiju monster films with Ann Hathaway in Colossal. Read our review here and our interview with Vigalondo here.

It's rare for a supernatural horror to strike a truly innovative path, but A Dark Song is as innovative as it is powerful. Catherine Walker and Steve Oram create something truly magical in this tale of loss, sorcery, damnation, revenge, and redemption, which finally arrived on Blu-ray (read our Fantastic Fest 2016 review here, and our interview with director Liam Gavin here).

• After the massive success of Moonlight and The Witch, red-hot indie distributor A24 had a misfire with Ben Wheatley's Free Fire, a madcap riff on the classic gangster double-cross shoot 'em up. It's unfortunate, because Wheatley's first real effort to break into a broader market is funny as hell and a perfect laughing love-letter to Seventies crime flicks. Catch it now on Blu-ray (read our review here, and our interview with Wheatley here).

• Austin-shot art-metal-horror The Devil's Candy was a Fantastic Fest 2015 favorite, and has finally arrived on VOD. Read our review here, and check out our interview with star Ethan Embry.

• A more comedic look at exorcism is Another Evil, a SXSW 2016 title that melded haunted house tension with a What About Bob? comedy riff. After a long festival and VOD run, it's out now on Blu-ray from Dark Sky Films. Read our interview with director Carson D. Mell here.

• SXSW Midnighter 2017 audience award winner 68 Kill (IFC Midnight) arrived with a bang on VOD like a meth-fueled After Hours. Read our full review here, and chase it down with our interview with writer/director Trent Haaga.

• A deep dive into the archive, as gut-churning SXSW 2008 Midnighter Shuttle has arrived on horror-dedicated service Shudder. Read our review here.