Paging Through the "Page Two" Archive

In early August, Louis Black, this paper’s co-founder and co-owner, announced his retirement from the Chronicle. In this week's issue, he files his final “Page Two” column.

Over the course of this paper’s now-36 years in print, Louis has been a passionate, sometimes-polarizing figure in the community, extending beyond his role at the Chronicle to include his founding partnership in SXSW and the Austin Film Society. In these pages, he’s written about pretty much everything under the sun, championing the art and artists and political causes he believes in, and expertly cutting down to size the ones he does not. Most especially in “Page Two,” which debuted in print in 1987, Louis has spoken eloquently, authoritatively, about the subjects that most inflame him: film, music, city politics, the state of the nation, his friends and family, and the Chronicle itself.

In honor of Louis’ final “Page Two” column, we’ve gathered some of our favorites of his columns from over the years.

“[The Byrds’ 1968 album Sweetheart of the Rodeo] opened the door not only to country music but to taking chances listening to all kinds of music with which I was unfamiliar. It took well over a half-decade, but listening to that album endlessly eventually lead me to realize the importance of Gram Parsons. Soon after its release in 1973, I bought a copy of Grievous Angel. When I wore it out, I bought another copy. And later, yet another.

“As one who has lived too much of my life deliberately being alone and in my head, there is a profusion of cultural landmarks that must be acknowledged. As crucial as Sweetheart was to me for many years, Grievous Angel became part of me, of my heart and breathing.” (July 31, 2009)

Persistence of memory: What the hidden, magic life of the New Jersey suburbs taught me about culture

“There was an afternoon in a small Vermont town near the southern border of the state. I was maybe 19. I crossed the street with a package of chocolate doughnuts in one hand, a quart of orange juice in the other, getting into a truck with my friends. But it was crossing the street – where a hot shot of straight sun burned down the center, even though there was snow and ice everywhere – that was a sensory cocktail: not that I just tasted or smelled the day, but that I sucked it in, so fresh and cleansed by the snow. I knew I'd always remember crossing that street.” (Nov. 18, 2005)

After the Flood: When everything is gone, there is love, and the memory of love

“Right now, hug the one you are with. Call those you love to tell them how much you love them. Strip naked before life, which is to strip naked before God knowing that you are not an island, not a peninsula, but a branch on a tree. A tree in a forest, a forest in a garden, a garden in a landscape. A member of a family. Unashamed, sing your love and talk it and speak it. Whisper it and shriek it. And share it. Share it loud and annoyingly and forever and strongly. And to all those you love tell them just that, now and again and forever. Because in a moment, after something as simple as a fall, they just might not be here to listen. And right now that is an emptiness as deep and vast and unending as I have ever known.” (July 8, 2016)

Praise and Lamentation: Saying goodbye and a final thank you to Clifford Antone

“Clifford was a true believer, a preacher in the holy church of American music, a deacon of the community of those who drink, sin, and profoundly repent. Clifford was a soulful confidence man (what great club owner isn't?), a twice-convicted pot dealer, an ex-felon, and someone who lived his life in love with and devoted to music – always a street prophet, signing up souls for the blues.” (May 26, 2006)

The Story of Isaac: Acting as if God partakes in partisan or national politics is a display of blasphemy, not faith

“Some of us against the [Iraq] invasion are not bleeding-heart one-worlders who want to embrace our most murderous brethren, hugging them as they repeatedly stab us. Some of us are worried that Iraq is a quagmire that we got into too quickly, still barely understand, and from which we will find no graceful exit (if, in the most optimistic scenario, a cohesive, democratic nation emerges, don't expect it to do so immediately after the first election). We're worried that to the rest of the world the United States seems like a temperamental bully, too dense to get what is really going on. We fear that, instead of the war stopping terrorism – or at least putting a deep fear into terrorists – it will deepen the split between the Muslim and Western worlds, encouraging terrorism for the next couple of generations.” (Dec. 24, 2004)

“The first time I saw Citizen Kane, I expected the screen to explode, fireworks to go off, and the mighty voice of God to fill my ear with hymn. Instead, it was just a movie, and thus I was left terribly disappointed. The second time I saw Kane I had gone to see Fritz Lang's M, but because the print hadn't arrived they showed Citizen Kane instead. Without expectations, I entered. I ran home, blood pumping and mind racing. I was reminded of this years later, when in 1994 Marjorie Baumgarten came in from a press screening of Pulp Fiction radiating energy, literally drenched in excitement. It had been a long time since I had felt her so electric. I had to see this film. The explosively joyous intensity of my first viewing of Pulp Fiction ripped off the top of my head and has done so on every subsequent screening. I hadn't seen Reservoir Dogs, but soon did, then Jackie Brown, and now Kill Bill: Vol. 1, each one a visceral and intellectual pleasure, each one the work of a confident filmmaker.” (Oct. 24, 2003)

'Sin City' may offer almost no suggestion of a moral substructure. But it insists there is morality, no matter how fragmented.

“What everybody seems to be missing in Rodriguez's brilliant cinematic evocation of the novels is Frank Miller's howling, Old Testament morality! A sense of extraordinary outrage at moral corruption coupled with a bizarre optimism about the ability of the individual to triumph.

“What? Have I gone insane?! A film about hookers, cannibalism, killers, corrupt cops, politicians, and religious leaders is in any way moral? Come on, one could argue, this is a film with lesbian killer prostitutes, extreme sexual perverts, and constant acts of random and extreme violence in which, in fact, there is no moral center!

“Exactly! As Henry Miller wrote, once you've given up the ghost, everything else follows with dead certainty, even in the midst of chaos.” (April 15, 2005)

“There was so much to these shows. They were rich in music, personality, and meaning, with brilliant new songs, revealing versions of the old ones, terrific and numerous musicians, all swirling around Neil Young at his most inspired. As with the best of Young's music and performances, there were any number of themes both to the new album and the shows. Even though I believe in trusting the art and not the artist, I come back to the autobiographical, not as a way to capture the shows or reduce their meaning, but because in that way they're immediately explosive and then continually unfolding. ...

“One of the most astonishing things about the concert for me was realizing that Young is mining the same themes and maintaining the same very human sensibility that's consistent throughout Demme's work. ...

“[I]n Demme's work, always, and in the way Prairie Wind reshapes the Harvest trilogy in Young's, there's now a certain quiet, fully informed optimism. Young missing his dog, comments: 'I may find one, you never do know.'" (Aug. 26, 2005) 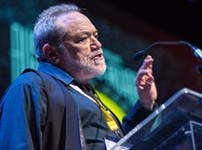