How Diverge Came Together

Director James Morrison on films and filmmakers that influenced him Some films come from research. Some come from workshops. When James Morrison first had the idea for sci-fi drama Diverge, it literally came to him in a dream. However, it wasn't the only source of inspiration.

Morrison's debut feature as writer/director gets its Texas premiere this Wednesday as part of Other Worlds Austin's year-round Orbiter program, before being released later this year through Gravitas (who are also releasing OWA's last Orbiter title, Dave Made a Maze). Before the screening, he talked about a few of the films and people that influenced his story. On Ivan Sandomire, lead actor in Diverge: "I just loved him and loved what he did in my short film (2011's "Little Brother"), so I started trying to write a movie specifically for him. There's something about his face, and watching him think, or watching him struggle.

"I wrote the script over about a year, and then we started filming it, and filming started to take forever. It was very low budget, so it wasn't a three-week shoot. We shot it over the course of a year and a half, and over that year and a half, people would have ideas, and Ivan specifically would have ideas about, 'Well, would my character do that?' The things that actors think about when they're doing a scene. So instead of going, 'Well, we can't fix that now,' we would have time in between shoots to revise the script, and add scenes to the latter half of the movie that would connect it more. We had a safe space to experiment." 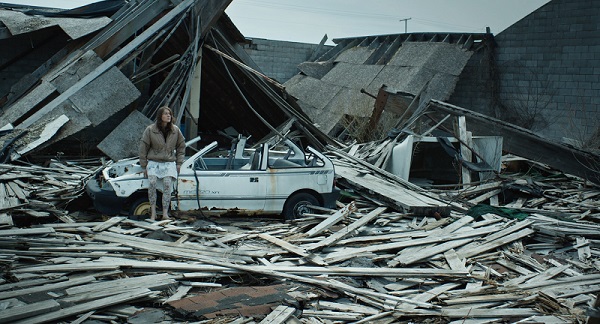 Claire Carré, OWA 2015 May Shelley award-winner and director of Embers : "I guess Embers submitted to Sundance, all the big ones, and didn't get in. She talked about going into this depression, and thinking it wasn't going to be seen. She then mentioned all these smaller festivals that she had a great time at, and the movie had a great time at, and had a long life after. That's how I found out about Other Worlds, so we submitted it, and didn't get in. I was so heartbroken, and then I got this email from them saying, 'We're going to do this year-round series, and we want to play your movie.'” Kat Candler, Austin-based director of Hellion and producing director on OWN Network's Queen Sugar: "If it wasn't for Kat, I don't think Andrew Sensenig (We Are Still Here) would have been in our movie. What happened is that I had the idea of trying to send it to him, because we reached out to his agent and didn't hear from them, which was more and less a no. Amre [Klimchak, Morrison's wife] is actually old friends with Kat, they went to Florida State together. I really wanted to get Andrew, because for us it would have been like getting Tom Cruise, because everyone on our movie was obsessed with Upstream Color. Annmarie suggested, 'Reach out to Kat, maybe she knows him.' She replied and said that she didn't have his cellphone, but she said, 'I think I'm friends with him on Facebook, I'll send him a message.' We didn't hear from her, but the next day we heard from Andrew Sensenig. 'I hear you know Kat Candler, I'm totally in.'" There Will Be Blood (2008): "I remember being in film school and as a kid growing up, people would say, 'Oh, movies are about the images and watching people do things. They're not just about dialogue.' I feel that, in the last five years, there has been this explosion of masterpiece movies that are a great example. Like the opening of There Will Be Blood, or A Ghost Story, all these movies that put that into action." Blue Ruin (2014): "After I came out of seeing that movie, I remember feeling the way I felt after I saw Momento or Pulp Fiction, that, 'OK, this is doable now.' I think Blue Ruin is definitely one where, it's not even my kind of movie, but it's so undeniably good, and has a personality. Macon Blair, his brothers (Brooke and Will Blair) did the score for Blue Ruin, and I reached out to them to do the music for Diverge, because one of the things I loved about Blue Ruin is that it's a synthy score that's not an Eighties reference. It's more like they came up with this subtle thing that really works well for this world." "Even though it's not a science-fiction movie, when it shifts into that second act, and it becomes about corruption in the police force, that's one of my favorite parts. … I love that thread of taking a movie that shifts in the second act, and has a new plot but it does all tie together. It's like a different movie, but it's connected."

Other Worlds Austin presents the Texas premiere of Diverge, with writer/director James Morrison in attendance. Wed., Aug 16, 7:30pm, at Flix Brewhouse, 2200 S. I-35, Round Rock. Tickets at www.flixbrewhouse.com.

Other Worlds Austin, OWA, Diverge, James Morrison, Kat Candler, There Will Be Blood, Andrew Sensenig, The Place Beyond the Pines, Blue Ruin